'I just have a lot of questions about things that frighten and confuse me.'

Brian K. Vaughan is a writer best known for his work on comic series like Y: The Last Man, Ex Machina, and Saga, and he's also spent several seasons working on Lost. Currently he's devoting himself to the television adaptation of Stephen King's Under the Dome. Marcos Martin, meanwhile, is an artist who has drawn some of the biggest characters in the medium: everyone from Daredevil to Spider Man.

Recently the two decided to join together on an interesting project, The Private Eye, a digital-only, pay-what-you-want comic about a world without the internet. It's a strange vision of the future where citizens dress up like animals to protect their privacy and unlicensed journalists have become private detectives — and with our current fixation on oversharing, it's a future that seems plausible, in spite of its more outlandish elements. We caught up with Vaughan and Martin to talk about The Private Eye, the current state of comics, and why Brian has no life. You can pick up the first two issues of The Private Eye at Panel Syndicate.

How did the project come about? And why did you decide to go the independent, digital-only route?

Marcos: Brian came up with the idea for the series and was kind enough to think of me as his partner in crime. I must say it took me a while to try and figure out the whole logic and the mechanics behind such a concept. It really wasn't until I realized that was the wrong approach and I had to see it more as a fable that it started to make sense to me. But really, I was sold the moment Brian called and told me about it. And I'm afraid it was my idea to go digital-only. I started thinking about a digital distribution model years ago.

"I was sold the moment Brian called and told me about it."

I've always felt that mainstream comics needed to find a bigger audience and lower the product price, which is the opposite of what's been happening for years now. Basically, to recapture the original concept of comic books as a popular product of entertainment, but do it in a way in which the creators are the main figure of the business model. For the first time, technology allows us to do just that. And I was hopeful that, through digital distribution, we'd be able to bring in more readers to traditional, print comics, also. However, for something like this to even have the slightest shot at succeeding I always knew I needed someone not only talented enough to come up with a great idea for a series, but with a big enough name in the industry to garner people's attention. And on top of it, was crazy enough to consider this idea.

Brian: Honestly, I'm just riding Marcos' coattails here. He's one of the best artists in the history of the medium, so I'll do anything to collaborate with him... even if that means trying stuff I'm horrible at, like anything involving computers. 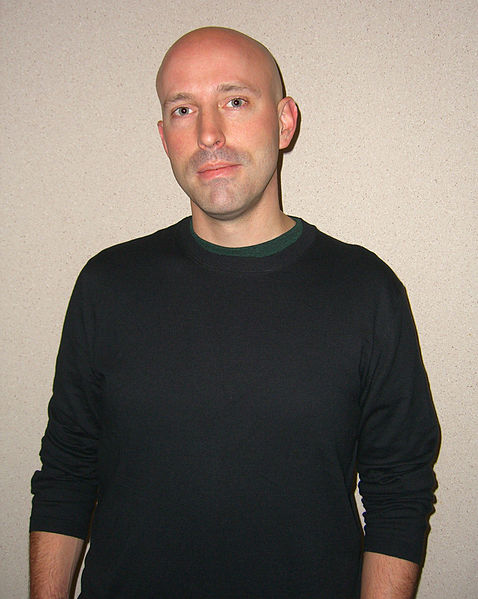 Why was the idea of a future without the internet so interesting? Was the contrast between that theme and the digital-only nature of the book intentional?

Brian: I've said this before, but I'm kind of horrified at the way so many of us seem to have willfully sacrificed our own privacy at the altar of social media. When they grow up, I doubt my young kids will be nearly as interested in the online world as our generation has been. My parents, who grew up around the space race, envisioned a future where we'd all be living on moon bases, but life rarely works the way we anticipate. So I wanted to write about a future where the United States took a similar U-turn, and see what it might say about our present. But it was Marcos' brilliant idea to make a story where the internet no longer exists be available exclusively online. Still, readers own their DRM-free digital comics completely after they download each issue from Panel Syndicate, so if you want to print up a physical copy for yourself, please feel free.

Privacy is obviously a huge focus of the series. Is there a particular message you're attempting to get across with regards to the information we store online?

Brian: I'm obsessed with privacy, but it's not just about what we store online. Between increasingly sophisticated facial recognition software, wearable computing like Google Glass, and even the commercial use of drones, the idea that we might all someday put on masks before stepping out our front doors is starting to sound less insane every day. That said, we really don't have a single "message" we're attempting to get across. I'd write an op-ed piece or something if I had this all figured out. Instead, I just have a lot of questions about things that frighten and confuse me, and whenever that happens, I write a comic.

"I just have a lot of questions about things that frighten and confuse me."

How has this experience compared to working on books for traditional publishers?

Marcos: Creatively, it's a whole different animal since here I'm building up a whole world from scratch. When you're working with established characters that you've grown up reading there's already a well of ideas you can rely on and draw from, which always makes the work easier. And there's always that tingling of childhood joy that comes with the fact of knowing you're contributing to the history of characters that you've grown up with and that have become part of your life. Obviously, the satisfaction of working on something you've created and own completely is hard to beat, though.

How has the response been so far?

Marcos: It's working out quite well for now but we're afraid it's too early to say if this is something that's viable in the long run or if it could work for other authors. The risk is too big and that's the reason why we wanted to try it ourselves before approaching anyone else. So far, so good.

Brian: It's succeeded way beyond my wildest expectations. We've had tens of thousands of readers from all over the planet download the first two issues in multiple languages, and I'm shocked and honored to say that the majority of them paid at least something for the experience. The response to the Panel Syndicate business model has been overwhelmingly positive, but I think the only thing that will determine whether the project remains successful moving forward is if people connect with our story. Thankfully, I think our next issue is one of the best comics I've ever been involved with, so I hope readers will come back for more. 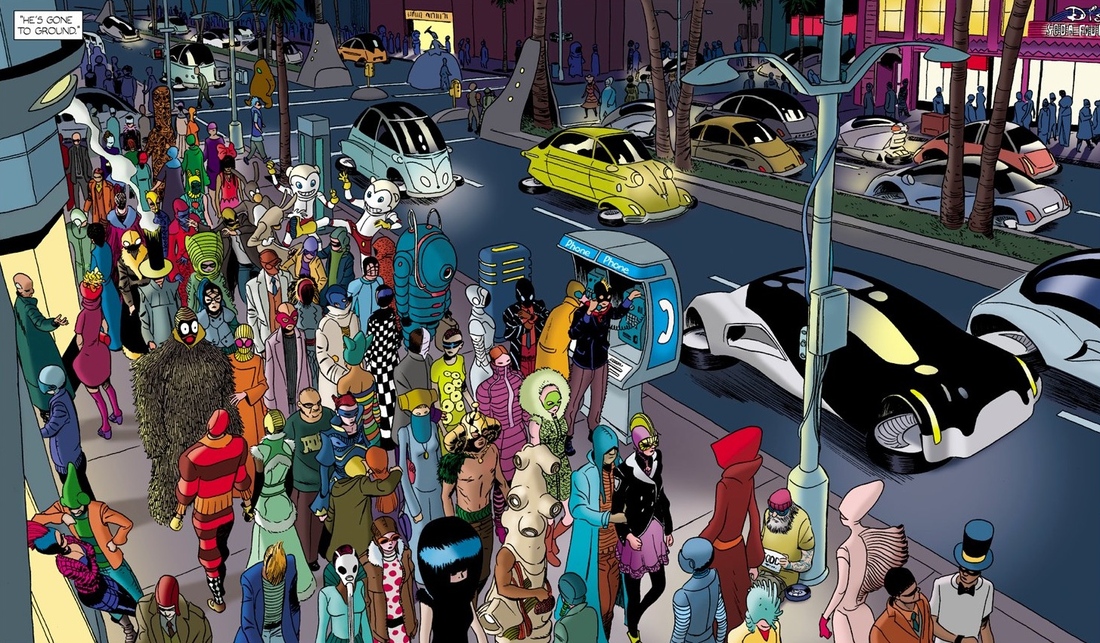 Why do you think this pricing structure works well for comics?

Marcos: I wouldn't say it has to be exclusive to comics, although the relatively cheaper production costs in comparison to other entertainment products definitely makes it a more viable option.

We do think it's the best possible model since it establishes a new, more direct relationship between readers and creators in which they both share equal responsibility for the success of the work. As creators, we are responsible for creating quality products to the best of our abilities and the reader is responsible for deciding the value he / she thinks that product has, according to each one's perception, possibilities and personal circumstances.

"I lack the speed and the ability to concentrate on working on two things at a time."

How do you manage to keep on a schedule when you're also working on other projects?

Marcos: In my case, I'm devoting all my time and energy to The Private Eye. I'm afraid I lack the speed and the ability to concentrate on working on two things at a time.

Brian: I have no life.

The first two issues are fairly standard comics just in digital form. But did you ever consider working with elements that don't have direct print analogues?

Brian: Not really, no. Marcos and I might be interested in new-school distribution models, but our first love will always be old-school comics, just words and pictures, no gimmicks.

Marcos: Personally, I have nothing against the options that have been taken when presenting digital comics. But I do think there's a risk of adulterating the comics medium to the point where it loses the elements that define its language and it ends up becoming something closer to a slideshow or an animated storyboard. 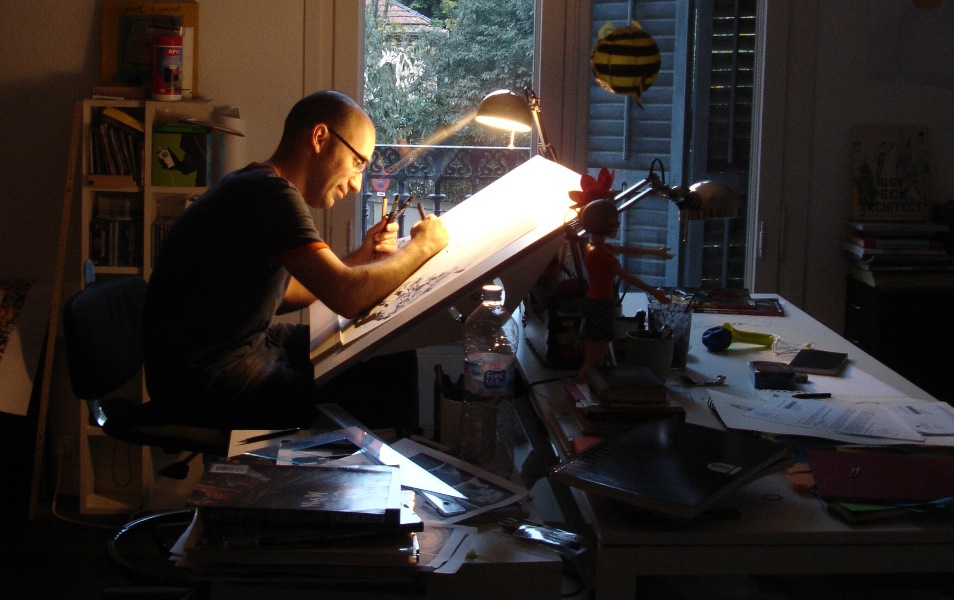 Does being digital influence how you approach the project in any ways?

Brian: Writing for screens has allowed Marcos and me to shift to a more horizontal form of storytelling from the relatively vertical world of print comics, but that's pretty inside baseball. For the most part, we've approached this the same way we have our past print collaborations: tell a cool story beautifully. I don't know if we've succeeded, but [illustrator Muntsa Vicente's] colors sure are gorgeous.

How do you find new good comics in general now? I used to be able to check the pages of a comic book for other titles from that press, but increasingly I'm relying on more scattershot things like Twitter.

"This is comics' second Golden Age."

Brian: I think the full list of nominees for this year's Eisner Awards is an excellent place to start (and not just because my other book Saga was fortunate enough to be included). It's a phenomenally diverse list, and not a clunker in the bunch. This is comics' second Golden Age, so whatever kind of story you're looking for, I guarantee you'll be able to find something amazing.

Marcos: I'd also suggest taking a look into the world of manga where you can literally find all types of story themes and subjects by some of the world's best storytellers: people like Naoki Urasawa, Taiyo Matsumoto, Suehiro Maruo, or Shigeru Mizuki to name but a few.

Adi Robertson contributed to this report