How high-tech jobs could solve the autism unemployment crisis

Share All sharing options for: How high-tech jobs could solve the autism unemployment crisis

Since getting his first Game Boy at five years old, Aaron Winston knew he wanted to work in the gaming industry. But as he got older, the prospect seemed less and less likely: Winston, who is autistic, enrolled in community college but never made it to his first day of classes. "The social environment scared me off," he told The Verge. "I was too nervous."

Three years later, however, Winston is thriving as a staff programmer at the nonPareil Institute in Dallas, TX. His first game, Space Ape, is available on iOS and Android, and Winston now looks forward to a future in the industry. "This is the right environment for me, and I want to stay at nonPareil for years," he said. "They gave me a career."

"The institute was born out of two parents worrying about their kids."

Winston’s success at nonPareil is no coincidence. The institute was established in 2010 by Dan Selec and Gary Moore, both parents of children on the autism spectrum, to hire and train autistic adults in software development. Both Selec and Moore’s sons demonstrated unique, remarkable talents where computing and gaming were concerned, but because of their struggles in social settings, risked never being able to apply those skills in paid jobs. "The institute was born out of two parents worrying about their kids," Selec said. "I didn’t just want to start another nonprofit. I wanted to do something practical. I wanted a lifetime solution."

The institute acts as something of a cross between a school and a company: 125 adults are currently being trained in software development, and another 35 — Winston included — have graduated from that educational phase to full-time jobs conceptualizing, designing, and coding programs. NonPareil has five titles on the market right now, and recently contracted with Sony to publish future games on the PS3 platform.

"They can blow people away. These are very talented people."

NonPareil is one of a handful of recently launched US organizations that are dedicated to training and employing autistic adults — which are estimated to comprise 1 to 1.5 million Americans — who demonstrate valuable talents in technological realms. One new Silicon Valley company, Semperical, plans to exclusively hire autistic software testers, and rely on a "remote employment model" that would circumvent the need for social environs that can be challenging for those on the spectrum. Another, Specialists Guild, trains autistic interns as software testers, and then works to place them in full-time jobs. Both ventures, much like nonPareil, were founded by individuals with autistic family members who showed impressive abilities with computing tasks. "Quite frankly, it would be a waste to have guys like the ones working for us, including my son, bagging groceries," Andy Aczel, the co-founder of Specialists Guild, said. "They can blow people away. These are very talented people." 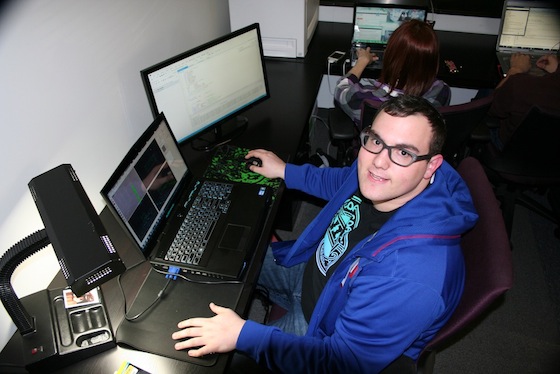 Aaron Winston, 22, now works full-time as a programmer at the nonPareil Institute.

The explanation for this micro-boom in tech employment among autistic adults is simple: thanks to attributes like dogged focus, accuracy, and obsessive attention to detail, some autistics are arguably more suitable for jobs like coding or software testing than their non-autistic peers. "These are often intelligent people who can persist, and persist, and persist, without being distracted," Dr. Gary Goldstein, chair of the Autism Speaks scientific advisory committee, said. "It’s hard for most of us to sit and do hours of coding, even if we’re capable of it."

Though Goldstein and others speculate that Silicon Valley companies are already staffed by plenty of undiagnosed employees on the spectrum, the industry is only recently making a concerted effort to hire those with autism. Earlier this year, for instance, global software giant SAP announced plans to hire 650 autistic software testers in the US, Canada, and Germany within the next seven years. And just last week, mortgage finance company Freddie Mac launched an internship program, described as one that harnesses "neurological diversity," to attract autistic adults with skills in data analysis.

Such initiatives will, at the very least, make a significant dent in the staggering rates of unemployment facing the autistic community. While hard data doesn’t exist, recent research estimates that only 32 percent of young adults on the spectrum work for pay, and that 65 percent don’t attend college. Those on the spectrum also have a difficult time holding down conventional office jobs, and often find themselves employed in roles that don’t utilize their intellect or abilities. And given that an estimated one in 50 babies in the US is now diagnosed with autism, that employment crisis threatens to get even worse. "It will be a very sad situation for them, and for our society, if we don’t have them doing valuable work," Aczel said. "Something needs to change."

"I just hope they have the heart to do it right."

At least in the tech industry, change appears to be coming. But it won’t necessarily be easy: despite their valuable skills, there’s no question that autistic adults often struggle to fit into conventional corporate work environments. And while those behind ventures like nonPareil and Specialists Guild are enthused by announcements like SAP’s, they’re also concerned that autistic employees won’t be met with the accommodations they need. "Let’s face it: autism is a disability, and it comes with certain challenges," Selec said. "If the SAPs and Googles and Microsofts want to get involved, I think that’s great. I just hope they have the heart to do it right."

Advocates are also concerned that a boom in tech jobs for autistic adults will perpetuate a new stereotype: that all of those on the spectrum boast innate, prodigious talents in computing and technology. "There is a small part of this community who really thrive and excel in this kind work, and want to be doing it," Aczel said. "But just like anyone else, autistic people have strengths, weaknesses, and diverse interests. The tech demographic is only one part, really, of the autistic employment puzzle."