A sci-fi adventure with a healthy dose of innuendo

My Ex-Boyfriend the Space Tyrant is a point-and-click adventure game in the vein of classics like Space Quest — it features simple, puzzle-based gameplay augmented with comic book art and a great sense of humor. It's filled with jokes that break the fourth wall, goofy characters, and so much innuendo it puts Leisure Suit Larry to shame. But as familiar as the game feels, it also does something very few titles have ever done before: it caters almost entirely to gay players. "I wanted to play a fun gay sci-fi adventure game," says creator Luke Miller. "There wasn't one, so I made it."

The game stars a retired space navy captain who has been called back into action when a new and powerful threat starts terrorizing the galaxy. As you can guess from the game's title, that threat just so happens to be his ex-boyfriend. It's a goofy setup, and the game doesn't get much more serious as it progresses. You'll come across sheep that act like frogs, a Robin Hood-type who likes to dress in rubber, and so many pairs of short shorts you'll wonder if the universe is suffering from a fabric shortage. My Ex-Boyfriend the Space Tyrant is unabashedly campy, and the sexual jokes are out in full force, from a particularly dirty talking elevator to a little puppy named Boner. It's the kind of game where people say things like, "If these walls could talk, they'd ask for a towel" and the main character's uniform keeps mysteriously falling off when he uses the transporter.

"I just wanted to make a fun game that was unashamedly gay," says Miller, and that sense of humour is a large part of the game's charm. The other elements — including some rather simple puzzles and often terrific, though occasionally uneven art — could all do with some polish, but My Ex-Boyfriend the Space Tyrant's personality is really what makes it worth playing. But, unsurprisingly, the theme has also created quite a bit of backlash.

"I just wanted to make a fun game that was unashamedly gay."

Though it's available to purchase now, Miller recently launched a Greenlight campaign for the game in an attempt to get it on Steam. The comments on the Greenlight page are a mixture of those excited about the prospect of a gay-focused game and those who seem actively angry about its existence. "This is a stupid idea and is borderline offensive to gay people," wrote one user, with another saying "I have friends that are gay and work daily to fight the type of prejudice that things like this create. Down voting just for being a cancer to their own cause."

According to Miller, the latter reactions are proof enough that a game like this should exist. "You can't even release a small gay game without it taking on this heavy weight," he says. "That shows just how under-represented gay people have been in computer games." However, he does take issue with one particular sentiment. "The only comments I disagree with are from gay guys who say it is undermining the acceptance of gay people — they really need to play it before they make that judgement." 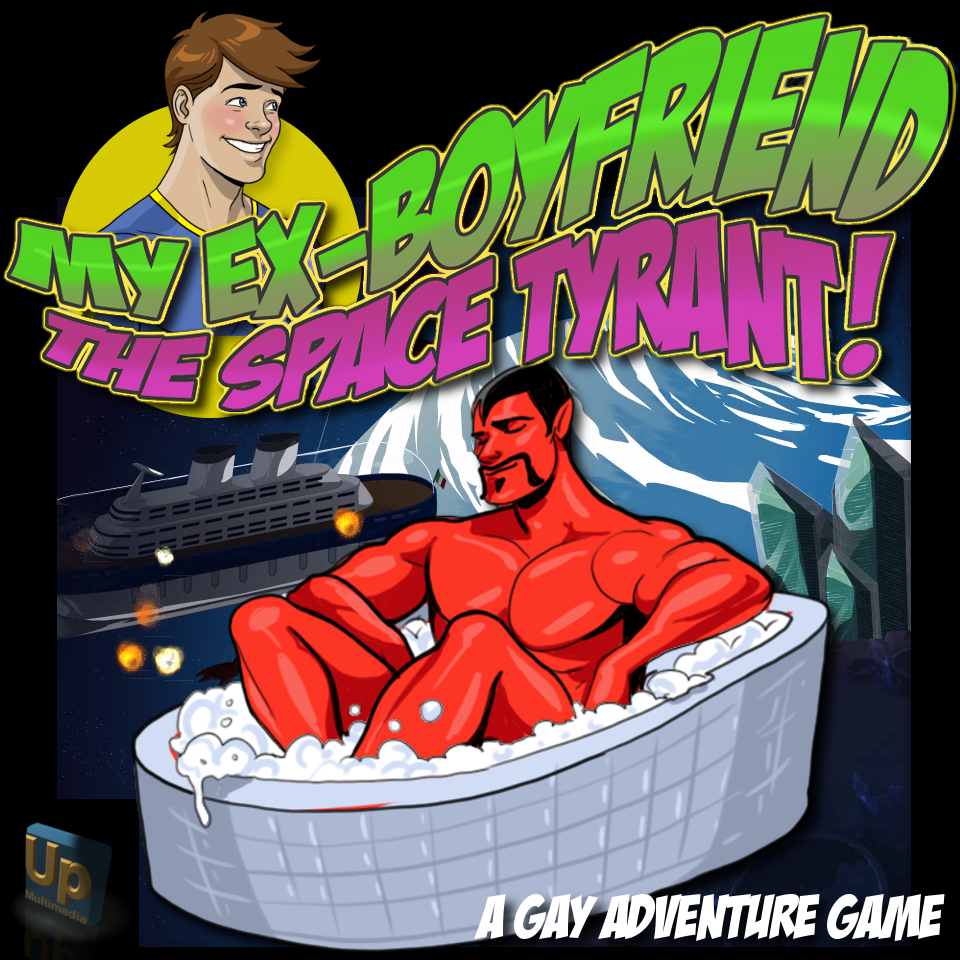 My Ex-Boyfriend the Space Tyrant required around two years of part-time work to create, and features the art of acclaimed comic book artist Joe Phillips. And while the campy art style and tongue-in-cheek jokes appear to have offended some, Miller says his biggest concern was actually determining just how inclusive the game should be. "Does a gay game have to have straight guys in it?" he says. "Does it have to have women? What are my responsibilities in that regard as a professional who wants to make a quality product?"

"Perhaps one day there'll be lots of gay games."

The game does feature both straight men and women, though of course the majority of characters are gay men, which puts My Ex-Boyfriend the Space Tyrant in stark contrast to just about every video game on the market. While some mainstream titles, such as the Mass Effect series, provide options for gay romance, the number of openly gay video game characters is incredibly small. And based on the big-name titles on the horizon, that's a trend that will likely continue in the near future.

"There are a lot of gay novels, gay films, and gay music," Miller tells The Verge, "so perhaps one day there'll be lots of gay games. I expect in the medium-term, though, since games are interactive we will have more and more mainstream games adding gay content as a discrete side option. If you want it you'll have the option, if you don't, you can avoid it. Both styles — gay games and games with optional gay content — are interesting developments."