Could Citizen, Rolex, Timex, and Swatch be the next big tech companies?

Technology has become high fashion, or at least is trying desperately to do so. The gee-whiz factor of gadgets has worn off, and more and more we're now just trying to integrate them into our regular lives, and make them not only more powerful, but more attractive. Whether it's the Jawbone Up or Google Glass, companies are trying to find ways to make gadgets as stylish as they are powerful.

But "stylish" may be harder for Jawbone and HP to achieve than we thought. That's why I was curious to check out Citizen's $495 Eco-Drive Proximity watch; Citizen has a long history of making beautiful, stylish watches, and now the company's trying to inject some 21st-century computing into the equation. Unlike the Pebble, which is essentially the modern equivalent of a calculator watch — useful, but not exactly what you'd call "classy" — Citizen already has cool cornered, and now it wants to quietly slip a gadget underneath. Can it pull it off? And, perhaps more importantly, are Tom Ford, Rolex, Manolo Blahnik, and Tiffany's about to become the electronics manufacturers to watch?

Let's start with the Proximity. To look at it, it's just a watch — for many of its users, that's all it will ever be. It tells you what time it is. It's solar-powered, so it'll do it forever without its battery ever dying. Its black face is accented with lime green dials and minute marks, and its black band has green thread woven through its edges. (The watch also comes in blue, but I like the green better.) The metal watch is big and bulky, bigger than the watch I'm used to wearing, and its two big buttons and large, clicking dial give it a feel more rock ' n roll than Rolex. The Proximity is a watch for the classiest of all skateboarders, or maybe the guy in the board room who might also get in a fight later. I'm a fan. 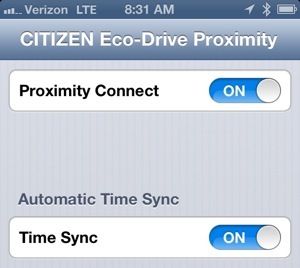 But in addition to the more standard dials, there's a tiny dial at the bottom featuring a handful of tiny, hard-to-read acronyms. That dial is, for lack of a better word, the control panel. By pulling out the watch's control dial halfway and twisting, you change the watch's mode — set it to pair with your iPhone (4S or 5, and no Android) via Bluetooth, quickly disconnect, and more. None of this is obvious or intuitive, by the way; I wound up poring over the Proximity's manual for pretty much every single thing I needed to do.

Most of what I needed to do, I did from the watch's companion iPhone app. The app looks like it was coded in about a half-hour, completely absent of anything like an "interface." It's just a set of toggles and menus that let you connect and re-connect the watch and phone, and set up its smartwatch-like features. But it gets you connected to the watch pretty quickly, and luckily there's not much setup.

The Proximity's power still pales in comparison to the Pebble, the Metawatch, or any of a host of other devices. It can't tell you who's calling you, or control your music, or change its watchface depending on your outfit. But I kind of love it for its limitations. 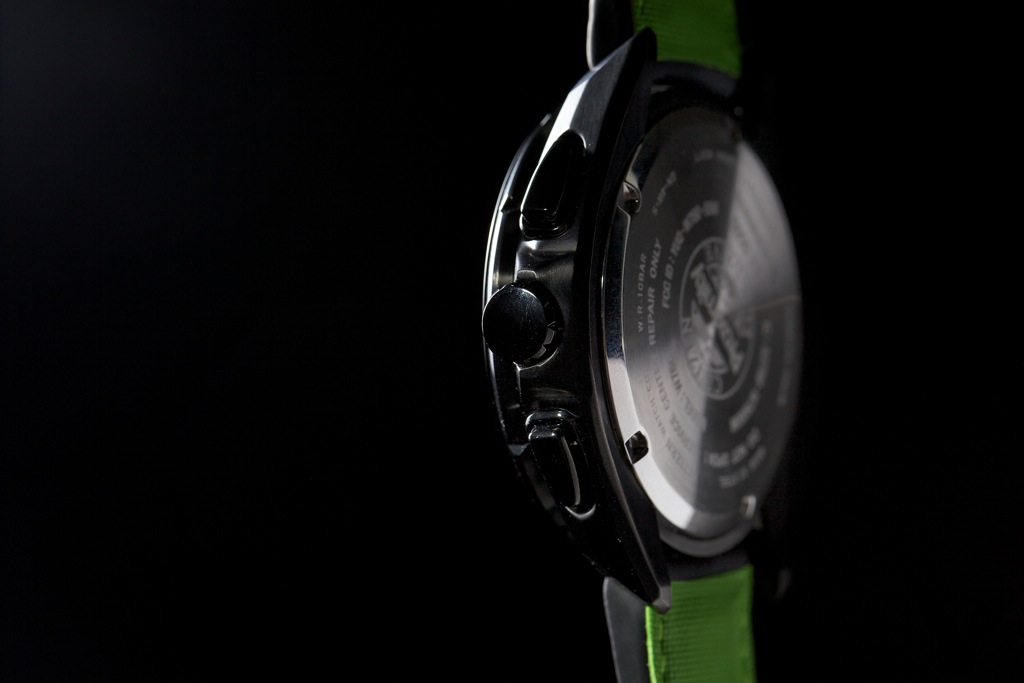 The Proximity can only really do one thing other than tell the time, and that's vibrate. It can vibrate when you get a phone call; when you get an email; when you have a calendar alert; and when it loses connection. You can't set it to vibrate differently for each thing, so the watch uses its ticking secondhand to tell you why it's buzzing. When you get an alert, the hand stops ticking and sweeps quickly to 9, 10, or 11 o'clock to let you know what just happened.

No text message alerts, and there's really no way to add them 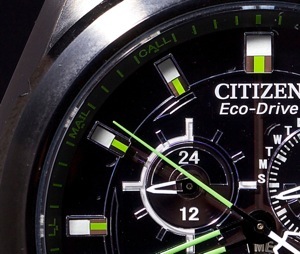 9 is LL, which means the watch has lost connection with your phone — this happens a lot, often seemingly for no reason, so even though it makes your wrist jitter too often it's probably a good thing to have. Even if connection isn't spotty, the watch automatically disconnects after six hours to save battery, but luckily it's just a press of the watch's top button to sync it back up.

The hand at 10 means you have an email. The watch can check any IMAP account, and they're easy to set up within the Citizen app, but it doesn't sync with any other apps on your phone, and only checks for new mail every five minutes. That meant I often got a buzz on my phone for an email, and a few minutes later my watch would vibrate with the same thing. When the hand is at 11, it means you're getting a call — it vibrates once when you get a call, and again if you miss it.

The biggest and most obvious thing missing is text message notifications, which would be really handy, but not only is that not available now, it probably never will be — it's not like Citizen can remotely update the big metal thing on my wrist so 7 o'clock says "TXT."

Since it's connected to your phone, there are a couple of other handy things that they can do together. My favorite: the watch syncs the time with your phone. That means your date will always be right, unlike my Seiko watch, which likes to think there are 31 days in each and every month. It also means you'll always have the right time zone, and never have to worry about winding your watch — it's an awesome mix of analog and the internet. If you press and hold both buttons on the watch, it triggers a loud noise on your phone so you can find it — it helped me out a few times, but the connection is so finicky and Bluetooth's range so small that I don't suggest just cavalierly tossing your phone into corners and crevices. 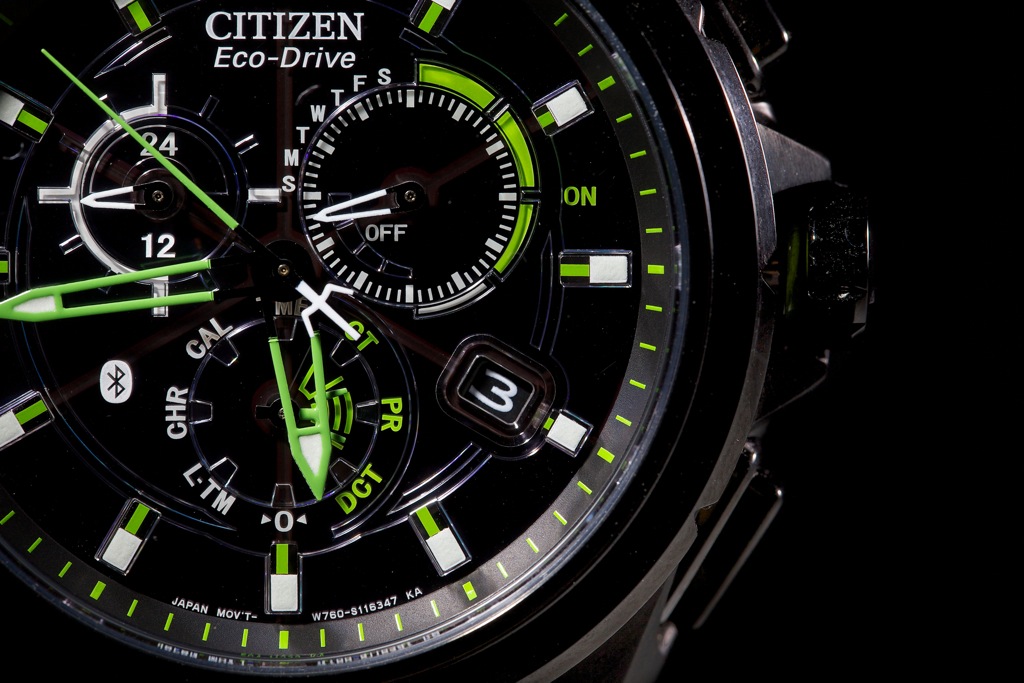 Smartwatches were supposed to prevent us from looking at our phones, make it easier to live our lives without checking our pocket every six seconds. But whenever I've used a Pebble, I just end up checking it every six seconds, and reading a whole email or text message on my wrist instead of on my phone. I don't mind reading on my phone — the part I hate is pulling it out of my pocket only to find all I have is a calendar notification, or that it didn't buzz at all and I'm just insane.

The Proximity's best feature was acting as sort of a filter: in a half-second I'd know whether or not my vibrating pocket was actually something I should pay attention to, and I'd only actually look at my phone for things that matter. It also meant I could leave my phone in my bag, or on the table, or charging in my room, without worrying about missing something really important. (Except for text messages. I missed a lot of those.)

It's a watch that's smart, not a computer for your wrist

Maybe we've been thinking about smartwatches all wrong. Instead of shrinking our computers down into something wrist-sized, with every function intact, we should instead be looking at how we can make our watches smarter. Smartwatches have the same problem as Google Glass: a cool device with impressive potential, but it's never going to catch on unless people actually want to wear them. So Citizen's moving in the opposite direction, starting with something people already like and slowly embedding a computer inside. If Citizen has its way, by the time we notice how smart our watches have gotten we'll already be hooked on how cool it makes us look. The Eco-Drive Proximity is the first smartwatch I can imagine seeing in GQ — for some reason I keep wondering what David Beckham would think of it — and it's also the first smartwatch I can imagine regular people wearing.

At the moment, the Proximity is a nice $495 watch but not a great smartwatch – it doesn't do much, it's virtually impossible to upgrade, and its Bluetooth connection is spotty at best. But the question now is, can Citizen get good before Pebble gets pretty? The race is on.