It's been less than 24 hours since news of a secret NSA order calling for Verizon call data first broke, and in the face of a public relations nightmare, the telecom giant isn't sitting idly. Earlier today, Verizon executive vice president Randy Milch released an internal statement to employees on the matter — and it's now been posted for public viewing. While Milch stops short of confirming The Guardian's report (Verizon is forbidden from doing so) he says the company would have little choice but to honor such a document. "Verizon continually takes steps to safeguard its customers' privacy," the memo reads. "Nevertheless, the law authorizes the federal courts to order a company to provide information in certain circumstances, and if Verizon were to receive such an order, we would be required to comply." 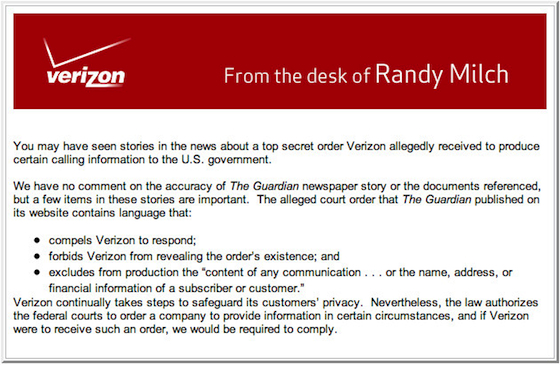 Milch does point to several items in the original story he describes as "important." For instance, he highlights that the leaked NSA order doesn't request customer names, addresses, or financial data. Nor does it ask for recordings or transcriptions of any communications. The company isn't stopping with a memo, however; Politico reports Verizon has asked President Obama's administration to come clean on the controversial request and discuss it publicly. Its lawyers are also said to be working at crafting Verizon's ultimate response to the public and all affected customers.