BlueStacks has brought Android apps to PCs and Macs. And its upcoming GamePop console will bring Android games to the TV. But none of this is unique — there are others who have tried similar things, most notably Ouya's Android-powered gaming console. However, BlueStacks has a radically more ambitious plan, today announcing that its Android-powered console will be able to run iOS games as well thanks to Looking Glass, a piece of software that mimics Apple’s iOS APIs.

The company has already lined up some relatively large iOS and Android developers to support its console, including Subatomic studios (the maker of the iOS hit Fieldrunners), Glu, Halfbrick, Jawfish Games, and Gameloft. Altogether, the company is promising that a collection of 500 of the top mobile games across Android and iOS will be playable on its console, as long as you're willing to pay $6.99 a month. Unlike Ouya, which sells Android games one by one, GamePop is taking a "Netflix for games" approach.

BlueStacks says it can run iOS games thanks to Looking Glass, a virtualization tool it built that has essentially recreated the iOS API on top of Android.

"Looking Glass works at the API level — it's not quite virtualization or emulation as you've known it," said Rosen Sharma, the company's CEO, in an interview. "We recreate the API that iOS provides, but we don't use any Apple bits to do it. So we skip iOS altogether." By building its own API that communicates with iOS apps, GamePop should enable users to play iOS games that are submitted to BlueStacks’ game store as if the console was running iOS — but it's not, it's running Android.

Looking Glass does all the heavy lifting to make iOS apps work on GamePop, Sharma said, adding that the barrier to entry for game developers will be minimal. "We're doing the engineering rather than relying on developers to remake their games," he said. "Literally all developers have to do is change their payments backend so it works with our subscription model and that's it. They don't have to do anything else to their games." The entire concept of GamePop, and the idea that it will be capable of running both Android and iOS games smoothly, is a confounding proposition. As fragmented as Android is, many devices can barely run native games decently — so it seems like a daunting task for an Android console to run iOS games well. And Ouya, GamePop’s primary rival, has its own problems running games well. 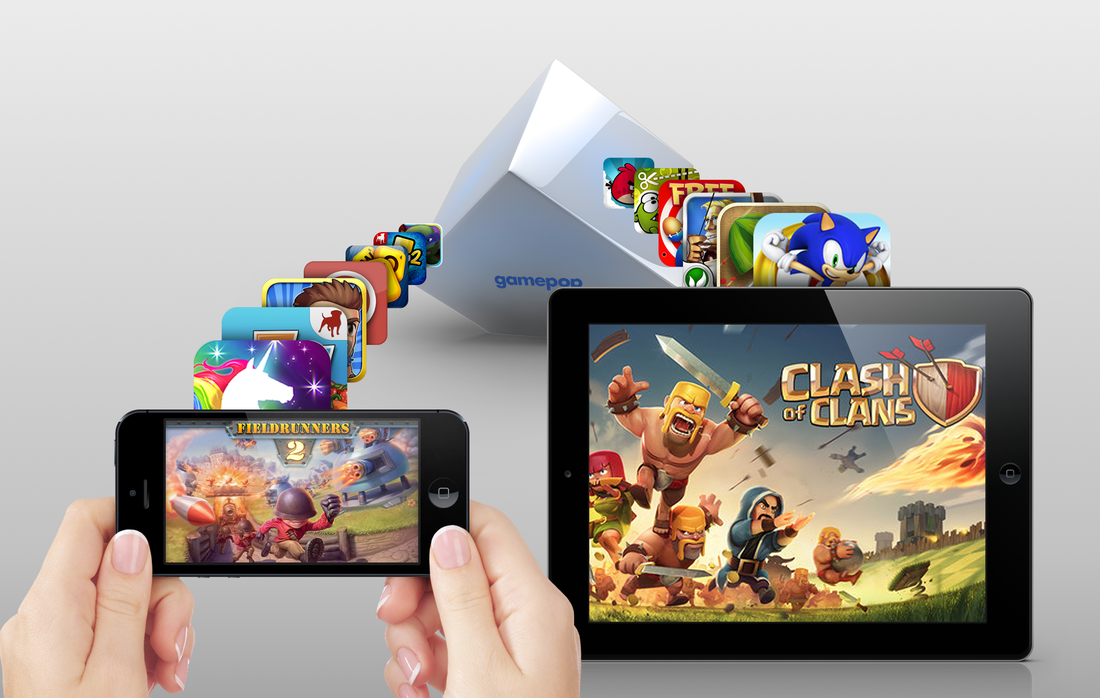 While Sharma and BlueStacks are happy to promise that GamePop will deliver both Android and iOS games, running in smooth, full-screen glory on a TV set in your living room, there are key parts about the product they remain mum on. The console has no solid release date, though it is set to ship sometime this winter. And the company hasn't yet talked about much about the hardware — though they have shown off renderings of what looks a lot like a white Boxee Box. Sharma declined to talk about GamePop's specs or internals, but sources with knowledge of the companies plans have told The Verge that Intel, Qualcomm and AMD will be supplying components for the console — all three companies are investors in BlueStacks, so this wouldn’t be much of a surprise.

"Everyone already has a controller in their pocket."

The controller remains a mystery as well. BlueStacks has yet to show either the controller or its apps, and that won't change anytime soon, Sharma said. But, he added, the GamePop controller will be built for mobile games running on TVs, and not simply an Xbox ripoff, or iPod Touch wannabe. "One of the things we have learned over the past years with App Player, bringing Android to PCs and Mac, is how you should and shouldn't play touch apps from a distance," he said. "How you interact with the game is a big part of the tech here — so we're holding that close to our chest until closer to the launch date."

Through the end of June, BlueStacks is offering GamePop for free, as long as users subscribe to its monthly gaming service for a year. If a user takes part in the free pre-order and cancels their service before 12 months pass, they'll be charged a $25 restocking fee and asked to mail the console and controller back to the company. If they don't, they'll have to pay a $100 "early termination charge." In July, things will get a lot simpler — the console will sell for $129 and gaming access can be turned on or off whenever a subscriber wants. Extra controllers will sell for around $20, Sharma said, adding that the planned Android and iOS controller app will mean "everyone already has a controller in their pocket."

"We don't want to be Dreamcast." BlueStacks promises that it will be announcing a number of high profile, iOS-first developers who will throw their support behind GamePop over the coming months. Sharma wasn’t afraid to denigrate the competition, either: "Others announce a large number of games too, but we'll have a high number of games that are high quality games. We don't want to be Dreamcast or Wii U. We think the success of GamePop will depend on having the best launch titles possible." The CEO said he isn't worried about attracting iOS developers over to his console, and that interest is already high.

Nonetheless, what Sharma is trying to do with GamePop simply hasn’t been done before. Mobile games on TVs, to this point, have been almost universally bad. Undoing that reality would be a technical achievement with or without iOS games in the mix. There’s also a potential legal question in running iOS apps on a non-iOS device. Sharma said the fact that Looking Glass uses no Apple code to recreate an iOS API keeps him from worrying about Apple suing him over all this. He worries "not at all. It's squeaky clean." Apple may have something to say about that by the time GamePop launches.