Planes, trains, and automobiles: why is booking a trip through Europe such a nightmare?

Planes, trains, and automobiles: why is booking a trip through Europe such a nightmare?

Europe has a travel problem. High-speed railways, budget airlines, and a single currency have made border crossing easier than ever before. For Americans accustomed to long flights and few railways, the European model can seem like a breath of fresh air. Actually booking a trip, on the other hand, can be surprisingly cumbersome.

Despite (and, in some ways, because of) Europe's tight connectivity, there isn't an easy way for travelers to compare and combine different modes of travel. A 2012 EU regulation on data sharing has certainly made railway booking more seamless, but comparing train rates to plane fares — or even combining train, plane, and public transit into one itinerary — has thus far remained a difficult and disjointed task. For web users, this typically involves hidden costs, repeated Google searches, and multiple browser tabs.

Two startups in Berlin are hoping to change that. Late last month, GoEuro launched an early version of its travel booking website, where users can search and compare rates across different modes of transportation — plane, train, bus, and car — at a single glance. For now, the site is only optimized for travel within Germany and the UK, but GoEuro plans to expand to other markets in the near future. When it does, it will begin to rival Berlin-based Waymate and become one of the top two competitors in Europe's "multi-modal" travel space.

GoEuro and Waymate aren't the first to take a stab at multi-modal European travel; UK startup Zoombu had similar ambitions before being acquired by SkyScanner, an airline travel aggregator, in 2011. But previous efforts have thus far been hampered by the fragmentation and bureaucracy of the European transport sector.

"It's an extremely fragmented market," Nareen Shaam, GoEuro founder and CEO, said in an interview with The Verge. "On the train side, you have mostly large government organizations that run the space, and on the bus side, there are many, many companies running across the continent."

The biggest challenge, Shaam says, is getting access to data from railway operators and airlines. Most train data, including timetables and station coordinates, is controlled by government organizations in Europe, and many have been reluctant to share in the past.

Germany's government-run Deutsche Bahn, for example, threatened legal action against a developer in 2012 after he published train schedules and coordinates in an online database. Deutsche Bahn officials claimed that the act violated copyright law, as well as the organization's existing agreements with third-party companies. In this case, the third-party company was Google.

Both Britain and France have made moves to open source their travel data in recent years, but in many cases, accessing this information still requires negotiations and partnerships. (Shaam notes that negotiations with French regulators have proven to be especially difficult, though he declined to elaborate.) 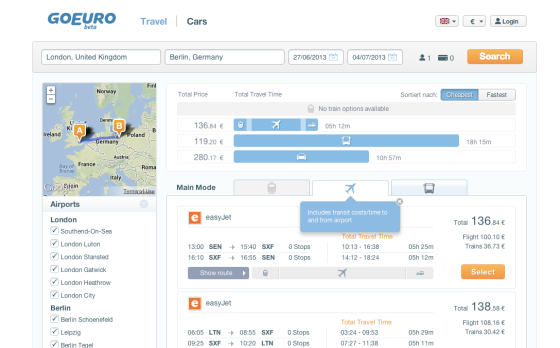 GoEuro's results include estimated time to and from the airport or train station.

So far, GoEuro has enjoyed early triumphs in Germany and the UK. Since securing $4 million in seed funding earlier this year, the company has gone on to ink partnerships with all 21 train operators in Britain, several major airlines, and the aforementioned Deutsche Bahn. Shaam declined to say how many partnerships GoEuro has secured at this point, but he confirmed that his company would focus on filling any remaining gaps in Germany and the UK before moving on to other European markets.

Yet obtaining data is only the first challenge; making sense of it, Shaam says, can be just as difficult. Germany alone has around 9,000 train stations, and railway, airport, and bus schedules are often coordinated with disparate back-end data systems. Whereas airport codes are universal (CDG, for instance, denotes Paris’ Charles de Gaulle airport across all search sites), railway stations are anything but.

Obtaining data is only the first hurdle

Even in its early incarnation, GoEuro seems to have handled the task remarkably well, pulling in real-time data from its partners rather than scraping from other sites. Searching for itineraries within and between Germany and the UK brings up a collection of bus, train, and airway options, classified by price and speed. Notably, the results also include travel time to and from airports, as well as the estimated wait time at ticket counters and security.

The design is more aesthetically pleasing than Waymate's platform, though it's not quite as ambitious. On Waymate's website and iOS app, both launched in April, users can not only compare different transport modes as they do on GoEuro, but book their trips directly from the site itself. (GoEuro currently sends users to third-party sites to complete booking.) 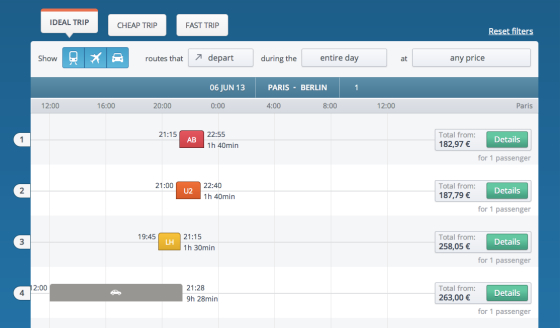 On Waymate, users can book directly from the site, without being sent to third-party handlers.

Both, however, admit that there's still plenty of work to do. GoEuro is looking to launch its own mobile app soon, and Kirsty Lee, Waymate's head of product, says her company has turned its attention to Android development as well. In both cases, there are still significant gaps in coverage; bus routes in the UK are incomplete on GoEuro, and the Italian market, for one, is virtually nonexistent on either site.

Nevertheless, both competitors have made promising progress toward the same goal: a transparent travel search site that's as unified as Europe's transport systems.

"These are things people do anyway — searching for flights, trains, busses," Shaam says. "We're just trying to make it easier for them to do that."