DisARMing mobile: is Intel finally ready to live inside your phone?

At Computex Taipei, mobile industry debates the future of silicon

Share All sharing options for: DisARMing mobile: is Intel finally ready to live inside your phone?

It's been difficult to escape Intel's presence at Computex Taipei this week; not only has the chip maker used Asia's biggest computer event to formally launch its Haswell PC microarchitecture, it's yet again made the case that it's a serious player in the mobile space. And on the face of it, there may be reason to believe.

Major manufacturers, including Samsung and Asus, have announced Android products powered by Intel chips in the past week. The new Bay Trail Atom processors promise significant leaps over the current Clover Trail generation, Merrifield smartphones are said to offer a 50 percent performance boost, and Intel even demonstrated a prototype Haswell device running in a thin, fanless enclosure. In a booming keynote on Computex's opening day, executive VP of sales and marketing Tom Kilroy proclaimed that Intel has "busted the x86 power efficiency myth." 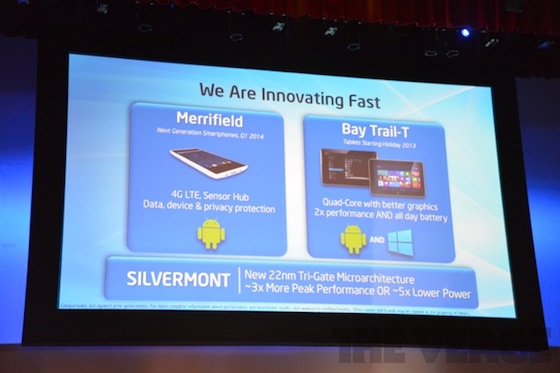 But the company has some way to go if it is to convince OEMs, carriers, and customers that its x86 processors can loosen the stranglehold held on the mobile market by chips based on ARM technology. ARM processors, which are used in iPhones, iPads, and the vast majority of Android smartphones and tablets today, have historically been selected for their high power efficiency and low cost. x86 refers to the architecture introduced by Intel in 1978 and used in its computer processors ever since.

"Why x86?" asks Jeff Chu, segment marketing director at ARM. "Answer me the question. What does x86 bring to the market? Five years ago someone would say 'Why x86? Well, it's Windows compatibility;'" an advantage that has been rendered less relevant by the ARM-compatible Windows RT and mobile-native OSes like Android and iOS.

Earlier this year, The Verge concluded that Atom chips based on Clover Trail were already a serious competitor to Windows RT tablets running on ARM, managing to deliver a full Windows 8 experience with next to no compromise; RT, on the other hand, does not let users install legacy Windows desktop applications. Bay Trail, the successor to Clover Trail, looks set to extend that advantage further towards the end of the year, and not a single manufacturer announced a Windows RT product at Computex this week. For Windows 8 tablets and "2-in-1" devices, at least, Intel's assumed claim to dominance appears credible.

But, Chu insists, ARM processors still have their place in the Windows ecosystem. "If people are going to put ARM into the Windows world, it has to do something different. And I will contend that what ARM does on the Windows side is actually give more of that mobile experience than the legacy desktop experience," he argues. "These devices stay on, you don't reboot them, you leave them over the weekend and they're still powered up. In standby you're not having the battery go dead. You want to boot it up? It boots up much faster."

"The fact that the apps are sandboxed and the fact that you don't load applications onto the desktop, so that you're not adding more registries in there, which causes the system to slow down and degrade over time ... I think Microsoft says that basically day 365 operates the same as day one. It is like a mobile device from that perspective."

Asus: Intel-powered tablet an attempt to "feel the market"

But even if Intel holds its grip on Windows, Android is a different story. Intel has touted Samsung's decision to go for Clover Trail silicon inside the 10.1-inch Galaxy Tab 3 as a sign of its growing relevance in the space, and Asus' Memo Pad FHD 10 is another device that simply would not have happened a year ago. There's little to suggest that either manufacturer is to make Intel a major part of its future strategy, however, nearly two years after Google announced that it would optimize each new version of Android for x86 processors as well as ARM. An Asus product manager told The Verge that the Memo Pad was an attempt to "feel the market," with the company viewing it somewhere in between a smartphone and one of its flagship Tegra-powered Transformer tablets. Asus previously announced the Intel-powered Fonepad tablet at Mobile World Congress in February.

Samsung, meanwhile, unveiled the Galaxy Tab 3 last week, the largest variant of which has an Intel processor inside. "It's not a flagship product by any means," says Chu. "It's the highest priced of the three tablets they announced, [but] the specs are actually lower than the 8-inch device based on an unnamed ARM core." Speaking to The Verge, an Intel engineer said that Samsung is using a Marvell processor for the 7-inch Galaxy Tab 3 and one of its own Exynos chips for the 8-inch version. "Samsung, as we all know, has very much relied on having multi-supplier strategies," adds Chu.

Apple, which licenses ARM technology for the processors in its iOS devices, has shown no indication that it would consider using Intel processors in its mobile products. Mac computers, however, have used Intel Core processors since Apple started to transition from IBM's PowerPC architecture in 2005. CEO Tim Cook said this year that Apple has sold over 500 million iOS devices, each with an ARM processor inside.

Even if Intel does manage to secure a foothold in Android tablets from here on out, that's a small and unproven market. Smartphones are the real prize, and that's where the future of x86 on mobile looks least certain — getting a manufacturer to put an Intel-powered tablet on shelves is one thing, but dealing with operators is quite another. The most high-profile smartphone with an Intel processor to date is Motorola's RAZR i, released in Europe last year; the device was not picked up by US carriers. 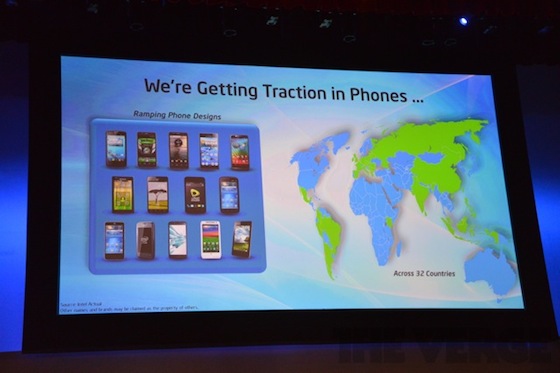 When asked by The Verge why the US is yet to see a phone with an Intel processor inside, Tom Kilroy’s answer was blunt. "The absence of LTE is the reason. We can't get ranged by US carriers without LTE. Once we have LTE — I mentioned multi-mode LTE [is] coming to market later this year — we'll have an opportunity to compete in that business in the US."

"Once we have LTE we'll have an opportunity to compete."

But Intel's solution relies on adding a separate 4G modem to the device, rather than including it as part of a single system-on-chip. OEMs often prefer integrated solutions for reasons of power efficiency and size, and historically US carriers have often opted for device variants that include SoCs such as Qualcomm's Snapdragon range. HTC's One X shipped with a dual-core Snapdragon S4 processor in the US, for example, but used a quad-core Tegra 3 chip in regions where LTE was less of a priority.

According to an Intel engineer, the company would "of course" like to offer an integrated solution, and expects such a chip to hit the market in 2015. But developing separate modems has an advantage of its own for Intel — it now counts companies such as Apple and Samsung among its customers for components, and hopes to use this relationship to upsell clients on its processors.

"It's not really about the core, it's about the rest of the SoC."

"A lot of times it's not really about the core, it's about the rest of the SoC," says Chu, who believes that ARM cores offer OEMs unrivalled flexibility for use in their own chips. Qualcomm president and COO Steve Mollenkopf agrees, declaring at a Computex presentation that "it's more than the CPU." 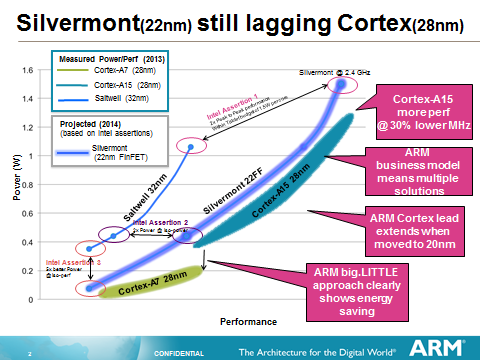 Still, CPU performance is an area in which Intel could theoretically exercise an advantage over ARM, given its experience in the field. But this week ARM cast doubt upon Intel's claims for its new Atom processors, releasing figures that implied Intel is still lagging behind. "Their performance levels are about the same as our quad-core Cortex A7, which is our entry-level product going into $150 phones," says Chu.

"The things that we've seen from Intel over the years ... let's just say each generation they talked about being there and getting there and the success rate has been relatively low if you look at the number of products that have been shipped. We look at real data and our estimate is that they're still about a generation behind."

"Our estimate is that they're still about a generation behind."

It's too early to comment on the performance of Intel's latest mobile processors — or ARM's — without final devices in hand. But what is clear is that Intel has a mountain to climb, and its expertise in processing power may not be much help in reaching the summit. "We're making significant progress in terms of the perception of Intel," said Tom Kilroy on stage this week, tellingly — the chip maker still has a lot of people to convince, and benchmark slides will not be the way to do so.