In the shadow of Google Glass, an augmented reality industry revs its engines

Share All sharing options for: In the shadow of Google Glass, an augmented reality industry revs its engines

"People always ask me if this is the dawn of the augmented reality industry," relates celebrated sci-fi author Bruce Sterling. "No, this is not the dawn," he says with relish, "this is 10:45AM on what's turning out to be a hot and turbulent summer day." His meaning is plain: augmented reality is here to stay. 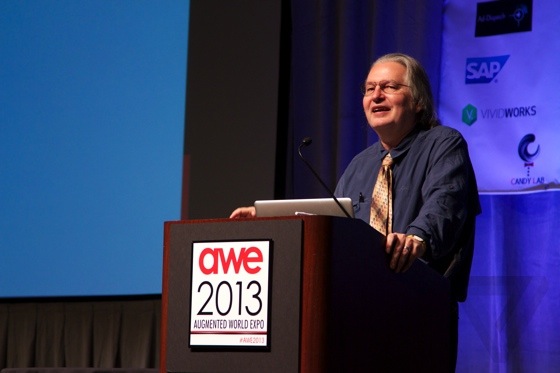 At the Augmented World Expo in Santa Clara, California, you'd expect no less from a keynote speaker, and yet this week's conference made a compelling case. Mobile analyst Tomi Ahonen projects that augmented reality will reach 1 billion people by 2020, and calls it "the eighth mass medium," following mobile, the internet, TV, radio, cinema, recordings, and print. One billion by 2020 Meanwhile, Google Glass has recently popularized the idea of augmenting one's self with cyborg-like abilities, and fellow giants like Intel and Microsoft are clearly throwing their hats into the ring here at AWE 2013. One Microsoft researcher wowed the crowd with Illumiroom, a projection mapping experiment that will reportedly appear in a future Xbox, right before a timid Intel executive announced that the company is sponsoring an impressive $100 million fund for its "perceptual computing" initiative.

But the majority of the speakers and sponsors of AWE haven't been waiting for the likes of Google to come and save their industry from mediocrity. While Google Glass wearers are abundant at AWE 2013, none of them appeared to be Google employees. There's an undercurrent running through the entire conference that Google is an upstart here. 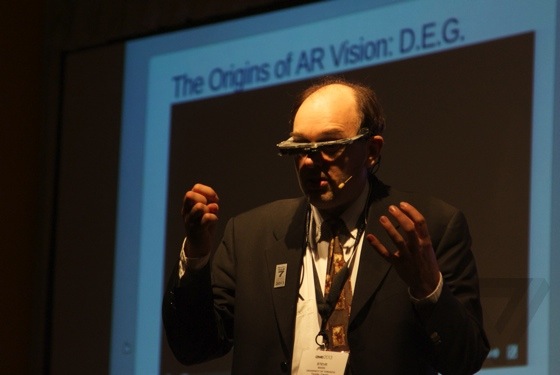 Steve Mann, often called "the father of wearable computing," didn't shy away from suggesting that Google hasn't learned from his own decades of work building headsets at MIT and beyond. He called Glass a "generation one" device, similar to his own early prototypes due to the way the eyepiece hangs above one eye instead of directly in front. "You keep looking up… and it sort of drove me crazy because I had to look up all of the time. Gen one glass was more of a nuisance than an asset, and it certainly didn't help me see better," Mann explained.

Outside the conference hall, Mann has a gallery filled with headgear that shows the progression of wearable computing devices over the past 35 years. It comes complete with a subtle dig: "This showcase event examines the notion that a major search engine company may not really be the first company to introduce personal displays that you wear on your head." Bruce Sterling is less kind: "I wouldn't mind wearing them if they had some facility," he says of Google Glass. 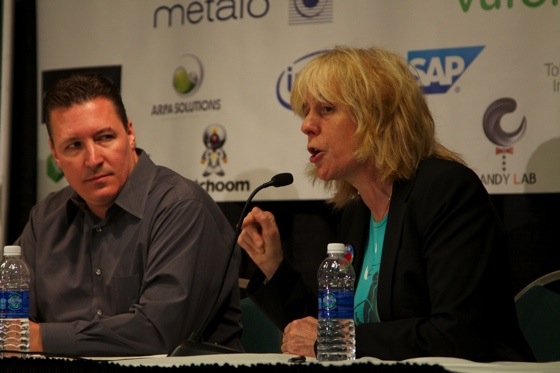 "Google's given us this great gift, putting augmented reality on the radar of popular culture," conference co-founder Tish Shute told The Verge, saying she actually believes that Glass could be widely adopted. "But here you're seeing the thousand flowers blooming," she said, gesturing to the small expo hall of the Santa Clara Convention Center where some 60 exhibitors showed off their work.

Miho Tanaka excitedly asks passerby to crowd around her booth, waving a Samsung smartphone in the air and explaining how her AirMarkr software can (slowly) interpret the gesture as a smooth, three-dimensional curve. Daqri, a startup that just announced $15 million in funding, shows how it can turn a pair of wooden cubes into a chemistry-learning tool: viewed through the lens of an iPad camera, one appears to actually be a sodium specimen, the other chlorine. Place them together, and they magically turn into salt. 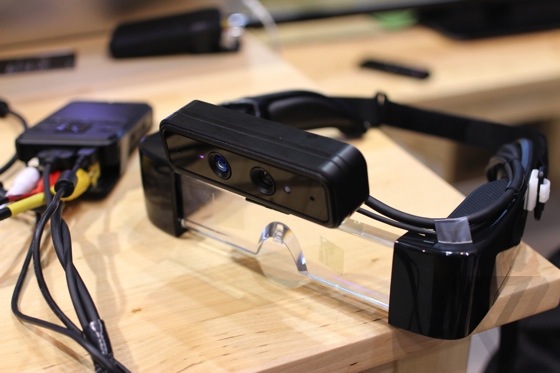 And that's to say nothing of the companies actually showcasing eyewear: Vuzix, Epson, Innovega, and Optinvent. And then there's Meta, which counts Steve Mann as its chief scientist. Meta is holding a Kickstarter to fund its development kit, one that actually uses a pair of Epson glasses with a Kinect-like 3D depth camera mounted on top. Mann calls it "Gen 5," explaining that it's advanced in four key ways since "Gen 1" products like the one that Google is offering. The idea is that you'll be able to manipulate virtual objects floating in front of you in real 3D space, but the reality isn't particularly impressive quite yet. While it does track hands and even random objects — you can hold up a piece of paper and project a virtual computer screen onto it — everything you see appears to be confined inside a floating translucent screen fifteen or twenty feet away, rather than layered on top of your full vision. 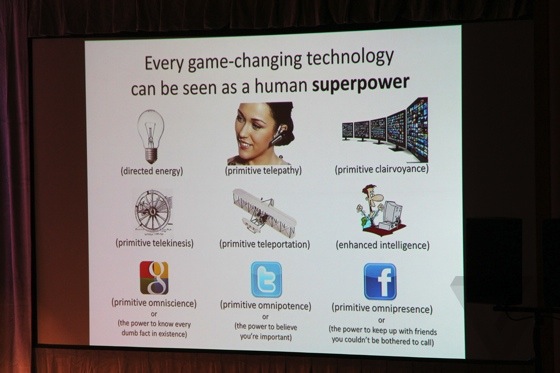 While the conference seems unified in the belief that augmented reality is here to stay and that Google Glass is mostly retreading familiar ground, the third theme at AWE 2013 is that no one's quite sure what the future of AR holds. In an inspirational speech, Avi Bar-Zeev of Syntertainment, a startup in stealth mode, suggests that it could change the world.

"Every game-changing technology can be recast as a human superpower."

"Every game-changing technology can be recast as a human superpower," he suggests, likening the television to primitive clairvoyance, the telephone to telepathy, and the wheel to telekinesis. "If I decide I want that rock to move, I have the power to make it move with much less effort," he says. But if you could reshape your reality at will, could "teleport" elsewhere, he asks, what would it mean to be in jail? Bar-Zeev also points out that the difference between augmented reality and virtual reality is purely semantic if you imagine screens built into contact lenses. "What's the difference between AR and VR? Open and close your eyes. That's it." 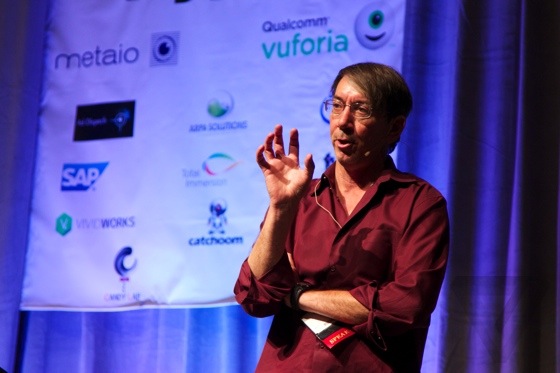 Will Wright, famed designer of The Sims and another Syntertainment co-founder, says he doesn't actually want to augment his world in the technical sense. As it is, the world provides too much information, says Wright, and he'd like to cut down on the clutter and improve the signal-to-noise ratio. "Maybe what we want is decimated reality.""Maybe what we want is decimated reality. If I had a system that removed information that was useless to me... that would be tremendously more valuable than putting ads in front of my face," he tells the conference. He (seemingly jokingly) suggests that such a system would be particularly useful for the Amish, who could experience a world more to their liking by filtering out certain elements.

Though Wright says that he'd like to explore the concept of decimated reality, it sounds like it's just a hobby right now. "We're not doing anything that would be recognized as augmented reality," said conference co-founder Tish Shute — yet another Syntertainment employee. When I ask why her colleagues play such prominent roles at AWE 2013, she explains that it's just the close-knit nature of her group to help out. "Everyone at Syntertainment loves robotics, cars, and the future of technology, and that's what binds us." 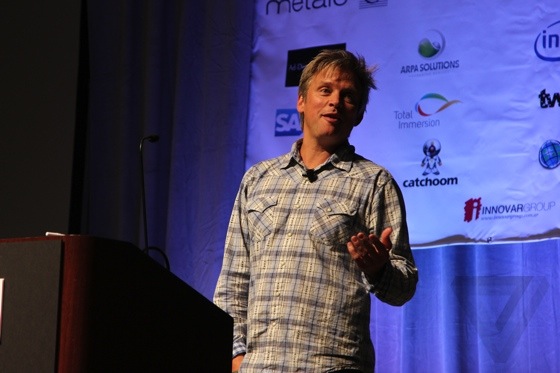 Philip Rosedale, creator of Second Life, has perhaps the most intriguing vision of the future. Working at a new startup called High Fidelity, which he described as "a generic platform for next-generation virtual reality," he said that he's come to the conclusion that we'll eventually duplicate earth itself — that developers will create a single dominant virtual reality such that your augmented reality device could let you look through the boundaries of our reality into a shared parallel world. Moreover, he believes the beauty and detail of that earth could surpass our own.

"...these augmented experiences will rival, and then in many ways surpass, the real world."

While nature only provides 1,000 watts of sunlight per square meter to build everything we see in a rainforest, he argued, Moore's Law predicts that computing power will continue to double. "What this all means, unless you're crazy, is that some point the richness and detail associated with these virtual and these augmented experiences will rival, and then in many ways surpass, the real world."