The Bing challenge: with iOS 7 and Windows 8.1, search could be Microsoft's new platform

The Bing challenge: with iOS 7 and Windows 8.1, search could be Microsoft's new platform

Redmond opens up to developers to take on Google

Earlier this year, the head of Microsoft's search team, Qi Lu, unveiled a new approach for Bing: the concept of a broad search platform that could feed into Microsoft's own products and third-party offerings. It seemed ambitious, and certainly felt like other unrealized promises to beat Google at its own game, but Microsoft is deadly serious and it now has some proof of its plans in iOS 7 and Windows 8.1.

Starting last week, a preview version of Windows 8.1 was made available, and it contains some deep search integration with the base of the OS. Bing's presence in Windows 8 will no longer be felt through a series of apps, but rather from the very search experience that Windows users utilize every day. Surprisingly, work on this integration only really started to take shape around seven months ago, just as Windows 8 was debuting in October. "With the Windows search integration, we’ve done most of the work," explains Bing's vice president of program management, Derrick Connell. "We have about 3,000 engineers worldwide, and this has been our top priority for the past months."

The Bing team works in six-month intervals on particular projects, so it switched priorities and focused on the Windows integration in order to deliver an initial version with the Windows 8.1 preview. "It’s probably our biggest engineering project ... since [we did] the original launch back in 2009," explains Connell. Essentially, the new experience pulls web results, images, video, news, and other items into a single hero interface with one central point of contact. It's incredibly powerful when it works on search terms that involve artists or celebrities, and also allows you to search for locations and pull up photos that were taken there from a personal SkyDrive, or to find certain shades of pictures on the web. Alongside this Windows integration, which Connell likens to working with an external partner due to the complexity and location of the teams, Bing is also powering Apple’s Siri search in the upcoming iOS 7 release.

"I think a lot of the execs at Apple switched over to Bing for a period."

"Managing the Windows work and the Apple work in some ways was not easy, but doable on our platform," explains Connell. "About two years ago, Apple included Bing as one of the search engines in Safari." Ever since then, the two companies have had ongoing discussions around what else they could work on together. "It was one of those meetings where we thought 'Wow, we’re ready to work on the next thing together,' back in the fall," says Connell. The big question for Apple was whether Bing's quality was good enough to power Siri. "I think a lot of the execs at Apple switched over to Bing for a period just to see if they could get the full experience of using Bing," notes Connell. The feedback was positive enough for Bing to generate a deal to handle Siri web queries in iOS 7, which launches later this year. Theoretically, a future version of OS X could also integrate Bing, a logical step if the iOS work is well-received by users. 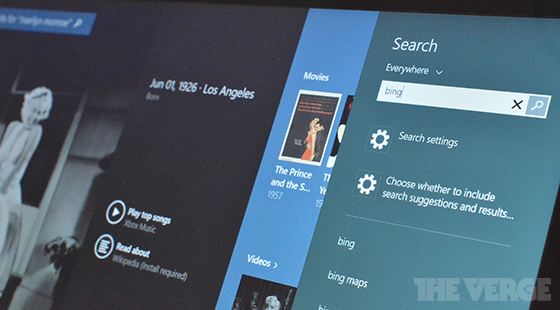 Bing integration in iOS 7 and Windows 8.1 are separate examples and differ in many ways, but they demonstrate a broader aim for the company. Microsoft is betting that consumers will start to use search in different ways, moving away from web-based search engines and toward the expectation that data will be available within applications or services instantly. If this change in user habits emerges, then Bing appears to be well-positioned to benefit from it. It’s a big break from the past when Bing tried to catch up to Google’s market share and largely failed.

Two big wins, but more to do

The new approach has two big wins so far, with the iOS 7 deal and deeper integration into Windows, but there’s still work to be done to improve Bing overall. Search queries outside of the US can often be incomplete, and Connell admits it’s a challenge to ensure that the Windows 8.1 search experience is as good in London or Stockholm as it is in New York and Seattle. "That’s one of the things we’ve been working on, to apply a lot of our techniques," explains Connell. "It’s a lot of work, but we’re feeling pretty good about where we are."

At Build last week, Microsoft launched a number of new Windows APIs that allow third-party developers to plug parts of Bing — everything from optical character recognition to 3D maps — into their own applications. "This is just the first step towards our vision for Bing as a platform," says Bing's vice president, Gurdeep Singh Pall. In an interview with The Verge, Singh Pall outlined a theoretical example of a future in which Bing could offer up in-app results for ink cartridges if you're running low on printer ink. "We would know that inside an Office application, so there's no reason why we would not let you buy that ink if the ink was running out … right inside the Office experience."

While Microsoft is struggling to unify its platforms in multiple ways, Bing is poised to become a bright spot. During the Build keynote, Bing got its own dedicated slot where Singh Pall demonstrated what developers could expect from the new tools. It was an unusual outing for Bing, and one that cemented the direction of Microsoft's search engine. Bing now powers Windows 8.1, Windows Phone, Xbox 360, and Xbox One. Internally it's already an important and successful tool, but Microsoft hopes to extend this idea to third-party developers. The importance of this platform to Microsoft is clear. "We're just super excited about this," says Singh Pall. "This is a game-changer for the industry."