LED led me astray: the home lighting misadventure that brought me full-circle

Share All sharing options for: LED led me astray: the home lighting misadventure that brought me full-circle

If I had known that last weekend was going to be robbed from me by the lighting industry, I probably would've just slept through it.

It all started, innocently enough, on Saturday. In the past couple weeks, my home — built in the latter half of the last decade but still lit entirely by old-school incandescent bulbs — had a couple lights burn out, so I trekked to Home Depot in search of replacements. It occurred to me once I got there that I should probably be buying something other than incandescent, given the proliferation of CFL and LED alternatives; they use dramatically less energy, and theoretically, they can last a lot longer. And traditional incandescents are going the way of Google Reader: Wattage restrictions imposed by the federal government means they're probably going to disappear over time, so you'd better start finding alternatives and making sure the electrical equipment in your home can handle them.

Incandescents are going the way of Google Reader

So, with a healthy fear of Federal Light Police agents storming my home and impounding my stockpile of incandescent bulbs, I selected a Cree 60W equivalent LED bulb for my burned-out bathroom light. It cost about $14 — which was significantly less than I expected, and one reason I'd steered clear of LEDs until now — and is rated for just 9 watts. For the burned-out flood light in my office, I bought two Philips 50W equivalent LEDs (the lamp takes two, and I wouldn't want to have one incandescent and one LED). These were more expensive at about $30 apiece, but they're highly engineered pieces of equipment: a center lens contains four LED bulbs, surrounded by a thick, solid encasement with a couple dozen holes for ventilation. Heat, it turns out, is the enemy of the LED — it changes the color of the light and significantly reduces life span — so manufacturers need to do everything they can to make sure the temperature stays down.

I brought the bulbs home and installed them. One thing to keep in mind is that none of these LED bulbs exactly mimic the shape of the incandescent that they're designed to replace, which led me to nearly break my bathroom fixture as I tried to shoehorn the Cree into place — but with time, patience, and elbow grease, I finally got it in. 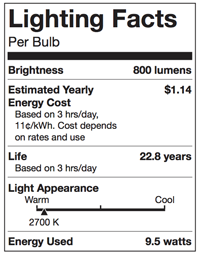 Another thing that had scared me away from LEDs is the concern of color temperature, which is something you never really had to worry about with incandescents. Both LEDs and CFLs tend to cast a far cooler (bluer) light than regular bulbs. That's fine for a store or office, but at home, it feels unnatural. Household items don't look right when they're not basking in the soft, orange glow of a tungsten filament — and as anyone who's used f.lux can attest, it's harder to relax in cold lighting. I discovered in shopping for the Cree and Philips bulbs that these lights all now have a "Lighting Facts" panel on back, which looks exactly like the ubiquitous Nutrition Facts panel on food products, except for... well, lighting instead of nutrition. It tells you key stats like how much the bulb will cost to operate, how bright it is, and — this is important — the "Light Appearance," which is its color temperature.

Cree's 60W equivalent bulb is available both in "Warm White" and "Daylight" color temperatures, listed as 2700K and 5000K, respectively, on their Lighting Facts panels. "Daylight sounds right for a bathroom," I thought, so I picked it up. For the Philips flood lights, I got Warm White, knowing that I was replacing very yellow bulbs and I didn't want to change the look.

I don't know what star Cree is referencing when it calls 5000K "daylight," but it isn't the sun in our solar system. The bulb casts an extraordinarily blue light that makes my water closet look more like an operating room. It's fine for a bathroom, but if I'd put this bulb in a living space, I'd be taking it back. The 2700K flood lights, by contrast, completely delivered — I was shocked to find that the light they produced was almost indistinguishable from the incandescents they replaced. I wasn't expecting that kind of color from an LED. (If you're using Philips' Hue system, this isn't a concern — but I just want one good shade of white, not a whole rainbow that I'm spending big money for.)

I don't know what star Cree is referencing when it calls 5000K "daylight," but it isn't the sun in our solar system

I was so impressed, in fact, that I set about looking for any other bulb in my house that I could replace. My top candidates were the four flood lights in a track lighting system over my kitchen, which I use for hours daily and emit a loud buzzing sound when dimmed. Thinking that the buzzing came from the vibration of the filaments in the bulbs, I figured that upgrading to LED would kill two birds with one stone: no more buzzing and significantly lower energy use.

This is where it all started to go downhill.

When I moved into my house in 2009, I replaced all of the switches and dimmers with Leviton's Z-Wave-compatible Vizia RF+ system, because that's what you do when you're a gadget nerd with a new home. I'd always known that this would be a problem as incandescents rode off into the sunset — the system's dimmers require a minimum of 40 watts to operate, for some reason, and that's hard to manage when you're using LED bulbs that sip just a few watts each.

But I tried anyway. I bought four 50W equivalent bulbs from Home Depot's house brand, EcoSmart. No luck: When I replaced all four bulbs, the indicator light on my in-wall dimmer went blank, which I took to be a bad sign. So I headed back to Home Depot, buying an $18 dimmer — not Z-Wave-compatible, of course — that Leviton advertises as "universal," meaning it's designed for incandescents, LEDs, and CFLs alike. 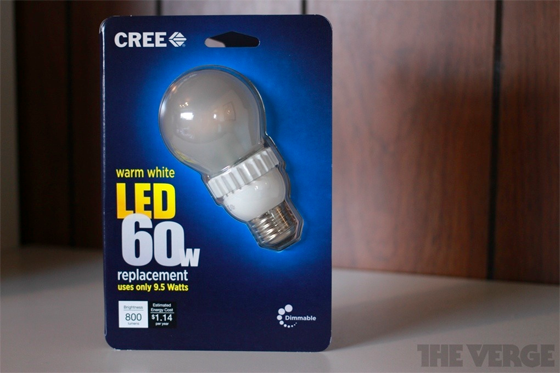 It didn't work. I found that if I set the dimming brightness to max and turned the switch on and off a few times, I could eventually get the bulbs to light up, but any attempt to turn down the brightness would cause them to extinguish again. It was inconsistent at best, and certainly not reliable enough to actually use.

LED and CFL bulbs have only recently been made in "dimmable" versions. Theoretically, that makes them far more practical — we don't always want our lights at maximum brightness — but the reality is that dimmable LED technology is still young. They have a far narrower range of brightness than an incandescent bulb, can flicker annoyingly, and occasionally don't want to turn on. These are the kinds of problems that LED-compatible dimmers are designed to solve, but I was finding that they don't.

There, abruptly on Sunday eve, ended my LED lighting experiment

Back to Home Depot I went. This time I bought an LED-compatible dimmer from Lutron, only to get an even worse result: I couldn't get the bulbs to turn on no matter what I did. Finally, I gave up on the dimmer and installed a simple on-off switch. To my bewilderment, the LEDs buzzed even louder than the incandescents I had replaced. My ceiling quite literally sounded like one of those big transformer boxes you see in yards. Not to say it really mattered — I wasn't about to permanently install a non-dimmable track lighting system.

And so there, abruptly on Sunday eve, ended my LED lighting experiment. I returned the four bulbs and their destroyed packaging in a plastic bag to Home Depot, which graciously refunded me, no questions asked.

As a technologist, I don't want to be surrounded by 20th-century lighting technology more than anyone else. But despite new federal laws, an intense marketing push, and the proliferation of affordable bulbs like Cree, this feels like an immature industry that isn't ready to fill every socket in my home. Next year, perhaps?