Microsoft started its new financial year recently, and the company has been showing off its plans for the rest of 2013 and beyond at its Worldwide Partner Conference this week. Kevin Turner, Microsoft's chief operating officer, showed off one particular slide that details updates to most of Microsoft's consumer facing businesses. 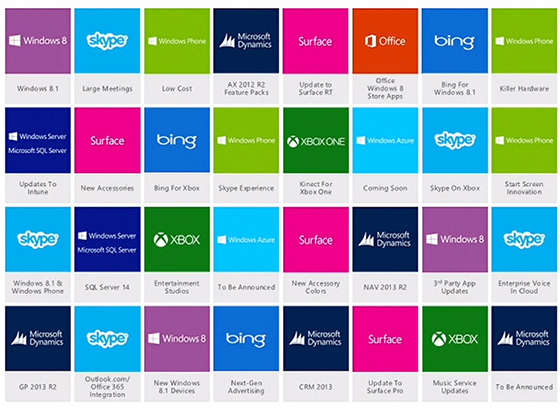 "Update to Surface RT" and "Update to Surface Pro" are both listed, suggesting that the company is planning two new models over the next year. Intel's recently released Haswell processors are starting to make their way into a number of Ultrabooks, so it's reasonable to expect Microsoft to adopt this on the Surface Pro side at some point. For Surface RT, things are less clear. Recent reports suggest that Microsoft is planning to refresh its Surface RT with a Qualcomm processor later this year, and The Verge understands the company has been testing Windows RT 8.1 Surface devices with Qualcomm's Snapdragon 800 processor. The chip also includes integrated LTE connectivity, so Microsoft may be planning a Surface with mobile broadband support.

The slide also mentions "new accessory colors" and "new accessories" for Surface. Earlier this year Microsoft hinted that future Surface covers could charge its tablet during in a Surface AMA on Reddit. While the company ruled out the possibility of a first-party dock, team members hinted at "future peripherals that can click in and do more."

More from this stream Surface 2 rumors: specs, accessories, and more