From Scientology to the quantified self: the strange tech behind a new wave of self-trackers

Galvanic skin response is a classic stress measure, but the science behind it is murkier than gadget-makers think

Share All sharing options for: From Scientology to the quantified self: the strange tech behind a new wave of self-trackers

This is the PIP, a thumbprint-sized widget that claims to monitor your stress level. Currently raising funds on Kickstarter, the device is another entry in the quantified self movement, letting you track your stress levels over time and linking to mini-games on your phone that reward you for driving those levels lower. For anyone who owns a Fitbit, it’s a familiar playbook, but what's new is how the PIP purports to monitor you. Instead of metrics like movement or heart rate, the PIP looks at your galvanic skin response (GSR) — basically, the level of moisture on your skin. It’s already a popular measurement, used by everyone from the police to the Church of Scientology, but it can also be mysterious and difficult to read. And as body-tracking devices like the PIP get in on the game, they’re discovering just how ambiguous GSR can really be.

Used by everyone from the police to the Church of Scientology

The mechanism is simple. Any time you're stressed or panicked, your body lets out a burst of sweat and your GSR levels get a bump. The PIP will show you that bump on your phone, and help you learn to reverse it. It’s a good trick, and an increasingly popular one. Exercise trackers like Basis and BodyMedia are already using the metric to track physical exertion, on the assumption that the more you sweat, the harder you're working. As Basis CEO Jef Holove puts it, the team wants to give users a "richer, deeper picture of their activity" than they'd get from tracking movement and heart rate. In other words, Basis wants that extra data stream to give consumers a reason to choose its device over a Fitbit or a Fuelband. The problem comes when deciding what to do with it.

"I don't believe we understand it very well."

Each project seems to interpret the data a little differently. The PIP uses GSR as a stress monitor, while the Basis Band uses it to track physical exertion — but that's just the beginning. Other projects use GSR to track how much a person is concentrating at a given moment. In 2011, The Gates Foundation issued a grant to develop GSR devices that would track how well students are learning in school. GSR is also one of the primary components of the polygraph test, and the metric behind Scientology's famous E-meter, used to track "the resistance of a human body." It's hard data, and we've got a hundred years' worth of practice in tracking it, but any given bump in your GSR could mean half a dozen different things. And as the metric becomes more popular in body-tracking circles, that ambiguity is becoming a bigger and bigger problem. 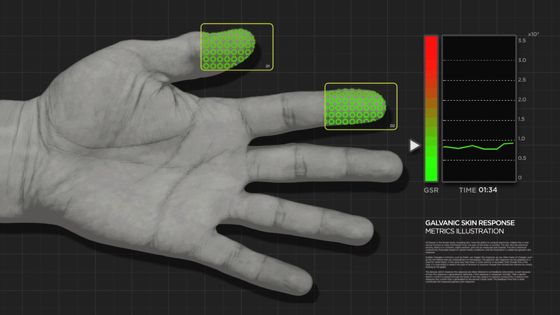 The cause of the response can be hard to deduce

"Personally, I don't believe we understand it very well," says Dr. Armando Barreto of Florida International University, who uses GSR to study computer interfaces. Physiologically, GSR indicates a fight-or-flight response, a surge in activity from the sympathetic nervous system that prepares us for intense activity. "Evolutionarily, it's a survival mechanism," Baretto says, "but these days we're not being chased by wild animals." As a result, the cause of the response can be harder to deduce. It's often sparked by stressful situations, but can also kick in because of something called "cognitive load," a response triggered by how intensely you're thinking. Barreto thinks of GSR as a measure of arousal, but that leaves a lot of room for interpretation, and is too ambiguous to be of much use to body-trackers. It's a limitation that Galvanic, the startup responsible for the PIP, is particularly aware of. "We don't go too much further than saying we can measure your stress level via your fight-or-flight response," says Galvanic's founder, Daragh McDonnell. Beyond that, the business of interpretation gets too complex.

GSR only measures the intensity of a feeling, not whether it's good or bad

This ambiguity is nothing new; it’s been causing problems for decades in various applications. The classic example is the polygraph test, often touted as a lie detector but dismissed by most psychologists as unreliable and suggestive. The test can give an excellent reading of when a person's sympathetic nervous system has kicked in, but diagnosing the reason for that shift is significantly more difficult. A subject's GSR could jump because they're lying, but it could also jump because they feel threatened, or because they're working hard to remember the truth. Rooting out the cause of the physiological response is tricky and often subjective work.

Devices like the PIP face the same problem. Your GSR might be rising because of stress, but it might simply be excitement. As Dr. Barreto points out, GSR only measures the intensity of the feeling, not whether it's good or bad. "It really only shows one dimension," says Barreto. "The fight-or-flight response indicates arousal, but you can be aroused because of either fear or excitement." Watching your team win the World Cup can also provoke sweaty palms, he points out, but not because it's stressful.

Some things are hard to quantify

Even if your goal is simply to calm down, focussing on the game might increase your cognitive load, driving up your GSR still further. By the same token, a GSR-based exercise tracker may think you're working out when you're stressed out about a deadline, and the Gates Foundation's student tracker may think kids are learning when they're simply confused.

These are solvable problems, and to some extent, many of the programs are already using some kind of workaround. PIP doesn't display GSR directly, but uses an algorithm to translate the data and smooth out some of the bumps. The Basis Band tackles the problem by adding more information, plotting heart rate against GSR to help separate out physical exertion from mental stress. But neither answer is a perfect one, and it points to a lingering problem as quantified self apps seek out new kinds of information. Even with a solid data stream, some things are hard to quantify.