This is Nokia's Lumia 1020, a 41-megapixel Windows Phone camera (updated)

Share All sharing options for: This is Nokia's Lumia 1020, a 41-megapixel Windows Phone camera (updated)

Nokia is holding a press event in New York on Thursday to "reinvent zoom," but here's the star of the show: the Lumia 1020. The Verge understands that Nokia will unveil its Lumia 1020 Windows Phone complete with a 41-megapixel camera and PureView branding. We're told the Lumia 1020 will come complete with a 4.5-inch AMOLED display, 2GB of RAM, and 32GB of storage. Some of the specifications for the device leaked earlier this week. Nokia is also supplying a wide-angle lens on the front facing camera of the Lumia 1020.

Nokia's PureView camera on the Lumia 1020 will include a Xenon flash and F/2.2 lens, alongside a new Pro Camera application and the company's OIS stabilization. The camera app will provide access to white balance, ISO, focus, shutter speed, and other settings through a radial menu-like interface. We understand that Nokia's camera app is feature heavy, with options to toggle aspect ratio on photos and the ability to enable a "dual capture" mode that takes images at different resolutions at the same time.

The Lumia 1020 accessories include a Camera Grip shell that features tripod-mount support and a two-stage camera button. The Camera Grip attaches to the rear of the Lumia 1020 and includes a USB port and battery. Nokia will also sell wireless charging covers for the Lumia 1020 as it's optional on this particular model. We'll be live from Nokia's event on Thursday at 11AM, stay tuned for all the details. 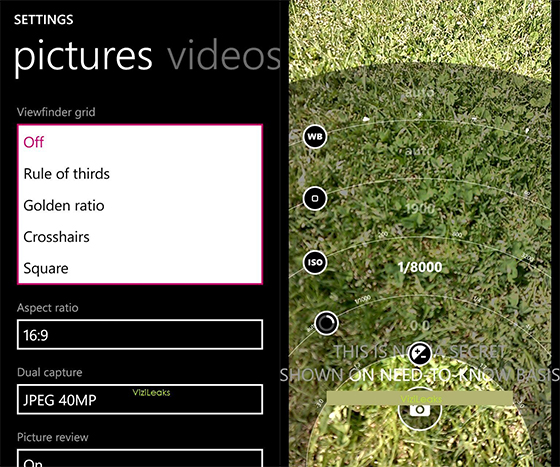 Update 2: AT&T has shared a new video about the Lumia 1020. In it, the carrier notes the device supports 6x zoom in 720p and the ability to record "high-quality stereo with deep bass" though "digital high performance microphones." A second video includes the low-light performance and Pro Camera user interface. A third video confirms optical image stabilization and the 41-megapixel sensor.

Update: Nokia's Lumia 1020 is official. Click here for all the details on this 41-megapixel Windows Phone flagship.