At a small, almost awkwardly intimate event at Pier 92 in New York CIty, Nokia just unveiled its latest PureView creation: the Lumia 1020. After a 45-minute buildup to the event that was nothing more than a slideshow of beautiful pictures "taken with a Nokia Lumia smartphone," we had to see the device for ourselves.

At first blush, it's impressive. The 1020 is handsome and sleek, rounded and not quite so boxy and large as some of the other Lumia phones we've seen. It's not small, though: the 41-megapixel lens coming out the back is large enough that it props the phone up off a table when it's laid down flat, and the 1020 certainly doesn't match the sleekness of the 920. The device comes in black, yellow, and white – the yellow is as awesomely ostentatious as always, but we're smitten with the sleeker black model too.

Otherwise, the device feels a lot like a mix between the Lumia 920 and 925. Its 4.5-inch display is clear and colorful, and we moved smoothly around the OS. The only time the phone seemed to stumble was when first opening the Nokia Pro Cam app, and when we quickly and drastically altered settings. The phone would jerk a bit as I flitted between, say, white balance settings, but only when I intentionally made it work. Otherwise it's as fast as you'd expect a camera to be, especially the Xenon flash. A Nokia rep wiggled the 1020 around while taking a picture, and thanks to the device's image stabilization and flash his picture (of his yellow Converse shoes) came out sharp and clean. 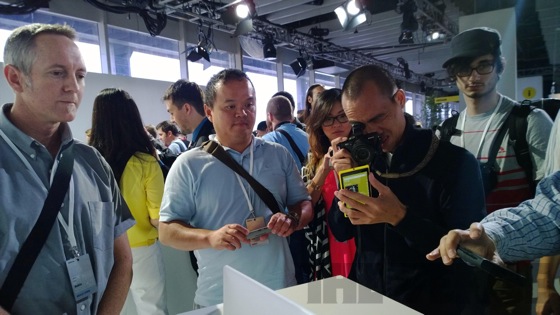 A sample five-megapixel shot from the Lumia 1020.

We've been shooting photos with the 1020 non-stop, and so far we're really impressed. The camera app is pretty fast, though changing settings can lag occasionally, but it's mostly really responsive — and the pictures we've taken here at Pier 92 look awesome. Photos are impressively detailed for a cellphone camera, though there's still more noise and grain than we'd expect from a dedicated digital shooter, and color representation and dynamic range are both awfully impressive.

The camera shoots two pictures every time you hit the shutter — a 34- or 38-megapixel full-res image, and a 5-megapixel picture designed for sharing. As you crop or retouch photos, new 5-megapixel pictures are saved to your camera roll. The only way to get full-res photos from the 1020 is to connect the handset to your PC.

We also got to try out two different accessories for the 1020, a back for wireless charging and a big camera grip. The second is far more interesting – it adds a nice grip for your right hand, so you can take pictures one-handed with the device, and offers a really nice, tactile shutter button that makes half-pressing to autofocus and taking pictures much easier. If you're a serious photographer, the grip makes the 1020 feel like a much more serious camera.

It's really more camera than phone, but no matter what it is we're fascinated to see what happens when the Lumia 1020 goes on sale next week at AT&T for $299 on contract.

Read more: What should we expect from the Lumia 1020's 41-megapixel camera?