What should we expect from the Lumia 1020's 41-megapixel camera?

What should we expect from the Lumia 1020's 41-megapixel camera?

With the Lumia 1020 today, Nokia's revealed its latest in a line of camera phones that introduce rather impressive imaging performance in a pocketable frame. We've all heard the headline spec — a massive 41-megapixel sensor squeezed into the body of a Lumia smartphone — but what should we expect with this camera?

The details we have so far (see our Lumia 1020 hands on here) lead us to expect similar excellence from this camera as we got with the 808 PureView. There's a good reason for that: from what we can tell, the camera package on the Lumia 1020 is quite similar to what Nokia placed in that massive hump on the backside of the 808. The most important feature is the sensor size: 2/3-inch. That's unfortunately smaller than the 808's 1/1.2-inch sensor, but that's still far larger than what's found in traditional smartphones (1/3.2-inch) and it's the same size as the sensor in the rather good Fujifilm X10. And sensor size matters because bigger sensors capture more light — which means better pictures. The Finnish company is also using the same software technique here that led to such great images with the 808 PureView last time around: oversampling. 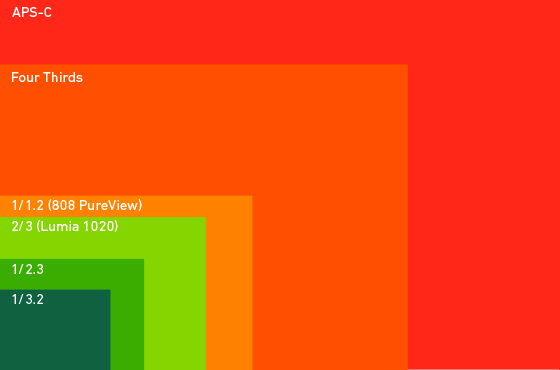 There's little point in taking 41-megapixel photos with a smartphone (you almost never need to print something big enough to use that resolution — especially something you took with your phone), but Nokia's taking data from up to seven pixels to create each pixel of the final 5-megapixel image. The result is a more manageable image that's both more accurate and far less noisy than what you'd get from a traditional smartphone or even a point-and-shoot. If you want a full-resolution image, however, you'll have it, as every time you take a shot the Lumia 1020 will save a 38- or 34-megapixel (at 4:3 or 16:9 aspect ratios, respectively) and a 5-megapixel image to the device.

That 41-megapixel sensor also allows the Lumia 1020 to use "lossless zoom." Since the sensor is so pixel-dense, when you zoom before taking a photo the Lumia 1020 will only use a portion of the sensor to take the photo — effectively zooming you in without degrading quality as much as you would with traditional digital zoom (read: upscaling) on a smartphone. It's not without some performance drop, however: the oversampling that helps produce great images will be limited or non-existent depending on how much you zoom. Like the 808 PureView, you'll get up to 3x zoom with the Lumia 1020. Even if you want to zoom after taking a photo, with the full-res shot there's plenty of space for cropping.

Beyond those 41 megapixels, Nokia's brought two significant improvements to the Lumia 1020 that weren't present in the 808 PureView: a backside-illuminated sensor and optical image stabilization. Backside-illuminated sensors in smartphones became a relatively well-known feature when Apple introduced it in the iPhone 4. Without getting too technical, backside-illuminated sensors move some wiring from in front of the photodiode (which picks up light) to the back, which allows more light into the camera. Meanwhile, optical image stabilization — which Nokia used in the Lumia 920 — uses ball bearings and tiny motors to help keep the lens from shaking, which is useful for both stills and videos. Combined, the two should help the Lumia 1020 offer pretty great low-light performance. There's also a xenon flash if you can't get enough light. 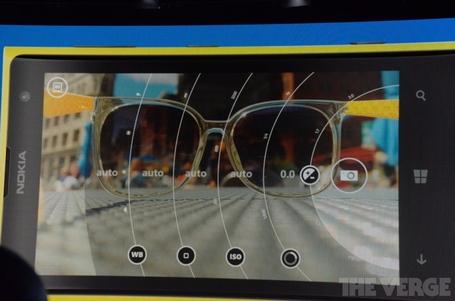 Nokia's also tossed in a "Pro Camera" app that looks pretty promising. The UI is made up of a series of semicircle sliders that reminds us quite a bit of the Samsung Galaxy Camera's interface, but the headline feature here is manual focus. As shown during today's presentation, you can slide a cursor across a semicircle to change the focus point from the foreground to the background. Considering tap-to-focus has always been fairly disappointing, it's a welcome addition. There are also sliders to control options like white balance, exposure, ISO, and shutter speed. With the latter option, you can do long exposures for light paintings and streaking taillights on the highway, for instance. Nokia made a big deal about these controls, but it's worth noting that even the simplest point and shoots have long had these options. Nevertheless, enthusiast photographers should be happy to see them on a smartphone. 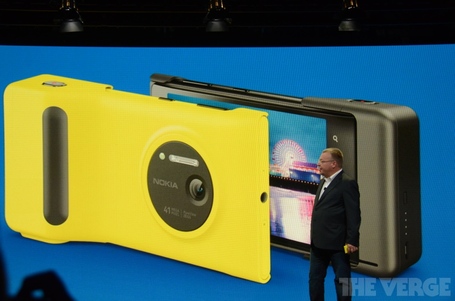 Overall, it seems there's good reason to be excited for the imaging performance on the Lumia 1020. Photos should certainly look nearly as good as they did on the 808 PureView, which massively impressed us when we used it last year, but it should be easier to get usable low-light photos with the 1020. We're not yet convinced by the new camera grip accessory Nokia announced today, however. The tripod mount, camera grip, mechanical shutter button, and extra battery offered by the accessory will only be more than a fun novelty if the phone's image quality is good enough to make the Lumia 1020 a serious camera. We'll need to test the device extensively to make a verdict there. Nevertheless, it's already clear that the Lumia 1020 — unlike the 920 before it — is worthy of the PureView name. The true successor to the 808 PureView is here, and it doesn't run Symbian.

Update: This post has been updated with information from Nokia that the Lumia 1020 has a (relatively massive) 2/3" camera sensor.

More from this stream Nokia's Lumia 1020: everything you need to know