‘Deus Ex' on iPad is a technical marvel, but a mediocre game

‘Deus Ex' on iPad is a technical marvel, but a mediocre game

AAA gaming on a touchscreen

Deus Ex: The Fall has many of the features you'd expect from a Deus Ex game. There are moments of stealth, RPG elements that let you customize your body with augmentations, a fun hacking mini-game, and a yellow-tinted cyberpunk world to explore. In a lot of ways, The Fall is a remarkable achievement. It's a spin-off of 2011's Deus Ex: Human Revolution, a blockbuster release on consoles and PCs, and at times it's so convincing you might actually forget you're playing a game on a smartphone or tablet. But those moments are all too fleeting as the touchscreen controls combined with a somewhat hollow story and world make the game feel like less than what it could have been.

The Fall does away with the protagonist from the previous game, Human Revolution's Adam Jensen, and instead puts you in the role of Ben Saxon, a boring British mercenary who is suffering from a disease caused by all of his fancy mechanical limbs. Unfortunately the drug that can keep his dizzy spells at bay is scarce, and so he sets about finding an ample supply of his meds. Naturally, he ends up being drawn into a conspiracy involving shadowy multinational corporations. It's a very Deus Ex-y setup, but the story is also pretty dry, and at times hard to follow. It starts out with some overly long cut scenes and questionable Russian accents before dropping you into a dystopian version of Panama City. Luckily for Deus Ex nerds, while the actual dialog leaves much to be desired, you'll be able to get a bit more out of the story by digging into optional emails, audio logs, and ebooks scattered throughout the game world.

When it comes to how the game plays, things are equally as hit and miss. First-person shooter controls are notoriously tricky to pull off on a touchscreen device, and The Fall attempts to remedy this by giving you choice. "Controls were obviously a big part and one of the reasons we built [the game] from the ground up, so that we could create a custom control scheme for the platform," says Jean-Francois Dugas, executive game director at Eidos Montreal, when asked about the challenges of bringing Deus Ex to mobile. You can double tap the ground to move to a specific location, or you can use a virtual dual stick setup. Similarly, you can use on-screen buttons or taps to get in and out of cover. There's even the option to completely customize the HUD, so that the buttons for firing your gun or pausing the game are exactly where you want them. There's a lot on screen but at least you can put it where you want it.

These features do make it relatively easy to set things up in a way that feels most comfortable for you, which is especially important if you're playing on a big iPad screen, but unfortunately the controls just don't feel quite right no matter what choices you make. Walking around and interacting with the world is easy enough, and sneaking around also works serviceably once you get the hang of things. But when you end up in a firefight, the aiming and movement just aren't very precise. Deus Ex games pride themselves on choice, giving you the option to either fight or sneak, and in The Fall the latter is preferable simply because it's less frustrating. If you're a fan of firefights, the game won't be much fun. I also ran into a few technical issues while playing, including one particularly nasty situation in which the game autosaved as I was dying — a few hours in, I was forced to start the game again from scratch. 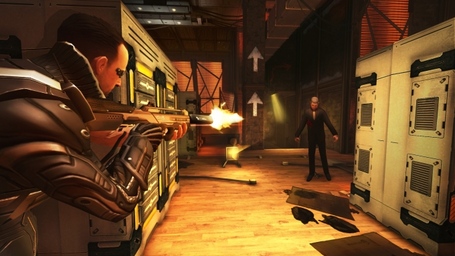 The frustrating inconsistency of The Fall extends to just about every facet of the game, including the visuals. While it's obviously not quite on the same level as Human Revolution visually, the environments are quite impressive. The slums of Panama City are packed with detail, from pieces of trash blowing in the wind to neon-lit billboards that obscure much of the skyline. On a Retina display, the cyberpunk world looks gorgeous. Unfortunately, that just makes the terrible, awkwardly animated characters look that much worse. Saxon himself is well-detailed, but everyone else you'll encounter looks ripped from an early Sims game.

On a Retina display, the cyberpunk world looks gorgeous

When things go right in The Fall, it's an incredible experience — there's a very specific thrill to hacking your way into a computer or silently taking down a foe that Deus Ex games are very good at. At times The Fall delivers those thrills incredibly well. But those moments just make the game's issues all the more frustrating. You want the game to be better because it often shows you it can be. Sadly the controls, technical issues, and empty story make it simply an adequate five-hour-long experience instead of a great one. It's still impressive, though, and along with games like XCOM: Enemy Unknown, shows the possibility for meaty, console and PC-like experiences on mobile. "We believe there is definitely an appetite for these types of games of mobile," says Dugas, "so yes, I'm pretty confident we'll see this trend continuing."

The game is available now on iOS with an Android version coming afterwards.