Twitter twister: why did 'Sharknado' take a huge bite out of the internet?

Share All sharing options for: Twitter twister: why did 'Sharknado' take a huge bite out of the internet?

A TV movie about shark-infested tornadoes took the internet by storm last night, marking one of the most bizarre social media events in recent memory. Syfy’s Sharknado, a disaster film starring Tara Reid and a cast of other C-list actors, debuted at 9 PM EST Thursday night, igniting a firestorm of tweets and snark. As a series of water cyclones swept up bloodthirsty sharks and dropped them over a fictionalized Los Angeles, a similarly epic conversation was unfolding on Twitter. The premiere didn't draw an especially huge TV audience — between 1 and 2 million tuned in — but it gained much deeper traction online, with SyFy describing it as the network's "most social telecast ever."

If you were on Twitter at virtually any time Thursday evening, it was almost impossible to avoid mention of Sharknado. Celebrities like Damon Lindelof and Patton Oswalt spent much of the night tweeting sarcastic one-liners, headlining an online viewing party that included everyone from Newark's mayor, Cory Booker, to Mia Farrow. At its peak, the film was generating more than 5,000 tweets per minute — nowhere near record levels, but undoubtedly impressive for a low-budget cable movie about airborne killer sharks.

As with any Hollywood production, there’s no way that Syfy could have predicted Sharknado’s success. In an interview with BuzzFeed Thursday, director Anthony C. Ferrante described the response as "one in a billion," claiming that the network put almost nothing into marketing his movie.

"There wasn't a marketing budget on this thing," said Ferrante, who, until Thursday, was best known for directing forgettable horror films like Headless Horseman and Boo. "It was all just the stuff we did with the trailers and just telling people about it and stuff."

Syfy's marketing campaign may have been low-key — the network aired a shark movie marathon leading up to Thursday's premiere and released an official trailer on Wednesday — but that doesn't mean that Sharknado's success was entirely accidental.

"It's a parody of the studio system."

The Asylum has perfected the art of quick turnarounds, often producing knockoffs like Snakes on a Train and Atlantic Rim within weeks of a film's theatrical release. It's an Ed Wood-like patchwork strategy that thrives on the periphery of big budget Hollywood productions, leveraging increased demand from non-theatrical channels like Netflix, Redbox, and DVD distributors. If the studio industry were a blue whale, The Asylum would be a low-budget suckerfish.

"It's a parody of the studio system," David Michael Latt, company co-founder and head of physical production, said in a recent interview with Pacific Standard. "We're making fun of the commerce side of this. You made your movie for $200 million? I'll make it for 20 bucks."

It's not clear whether SyFy did anything to orchestrate last night's online explosion, but The Asylum, at least, has been pursuing subversive marketing techniques for years.

"This isn't about trying to get you to watch our movie," the company wrote in a blog post in 2010, calling for its viewers to inflate their Netflix queues to boost demand for Asylum films. "This is about gaming the system. This is about taking a stand. Against math."

The Asylum and Syfy have collaborated on a number of made-for-TV disaster films in the past, and the network continues to trot out similar low-budget fare on a regular basis. But none have been as enthusiastically (and sarcastically) received as Sharknado. The response is not unlike the "so-bad-it's-good" following that Snakes on a Plane garnered in 2006, but that movie was heavily marketed and, importantly, predated the rise of Twitter. Sharknado was branded in similarly self-aware fashion — the tagline on its comic book-style poster reads, "Enough said!" — but its success was largely driven by the "event" of its premiere, which crystallized in dramatic form last night on Twitter. 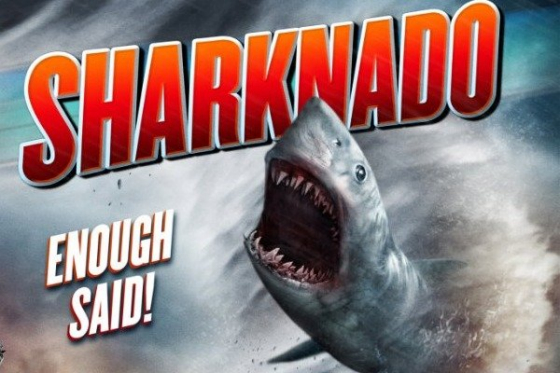 It remains unclear whether Sharknado's explosion will translate into longer-term success for Syfy, which dramatically rebranded itself in 2009. As with many other Twitter phenomena, the film’s popularity could very well have a short shelf life, and it may be impossible to replicate for other properties.

Much of Sharknado's unexpected popularity could likely be attributed to blind chance, and the unpredictable whims of whatever factors drive viral content. But the film's "happy accident" was also underpinned by a very deliberate, and long-running content strategy — one that, at least last night, dovetailed with the camp and absurdity that many online audiences and snark peddlers gravitate toward.

"This isn't about trying to get you to watch our movie. This is about gaming the system."

Syfy, somewhat paradoxically, may have fueled the film's rise by not heavily promoting it, thereby allowing fans to feel as if they've "discovered" something.

"They seeded production images, the movie poster and trailer to fan blogs, who then pushed to their social networks," says a social media marketing manager working at a Hollywood movie studio, who declined to be identified for this report. "Syfy didn't advertise, the fans discovered Sharknado on their own, and now they get to be the one to tell their friends."