Redmond bets on tearing down the walls between Windows and Xbox

Microsoft has always been a giant castle with many fortresses. Internal battles and power struggles have led individual divisions to focus on their own success to the detriment of collaboration. Over the years, it’s resulted in a number of false starts, delayed products, and departures of key employees.

Microsoft announced some major management and structural changes on Thursday. In an email to employees, Ballmer outlined the far-reaching measures under the slogan "One Microsoft." Nearly every part of Microsoft will be affected by the moves, in one way or another, but the clearest changes are focused on the "devices and services" vision outlined in October. Ballmer wants Microsoft divisions to collaborate, innovate, and finally deliver on their promises, but what does this mean for Windows, Windows Phone, and Xbox?

The walls of division start to crumble

Ballmer warned of a "fundamental shift" in Microsoft's business as he outlined his push towards a devices and services company just ahead of his riskiest product bet: Windows 8. The change wasn't immediately felt, but Thursday's reorganization seems to underline just how serious Ballmer is about changing Microsoft. After the departure of former Windows chief Steven Sinofsky, many feared Microsoft was nervous about the future of Windows. In fact, it’s clear that a fortress has been broken down that prevented collaboration around the Windows software to power Microsoft's own devices, alongside third-party tablets, phones, and other hardware.

We're starting to see even fewer fortresses. Former Windows Phone chief Terry Myerson is taking charge of a new operating systems engineering group that has Windows at its core. Myerson will be responsible for the software that powers Windows PCs, Windows Phones, and even Microsoft's Xbox devices. If Microsoft wasn't clear enough about Windows everywhere, it is now. "Windows, Windows, Windows," as Ballmer puts it regularly. Julie Larson-Green, a 20-year company veteran who replaced Sinofsky to run Windows engineering, is the lead of a new hardware division at Microsoft. In an unusual move, Larson-Green is shifting away from her traditional focus on software, having worked on Office and Windows, to oversee the hardware engineering of Surface, Xbox, and future Microsoft devices. Larson-Green would seem like a natural fit to continue her Windows focus, but with Don Mattrick out the door, Ballmer clearly needs someone he can trust in charge of hardware and Xbox, and there are no obvious choices with sufficient seniority. 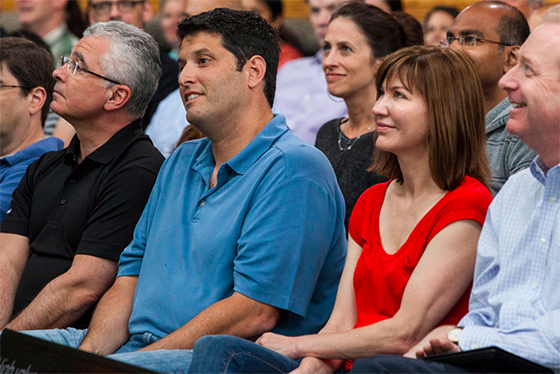 A promise of a hardware and software blend

"I think it's a perfect way for us to approach it," says Larson-Green in a response to a question from The Verge. "Terry and I have worked together for a long time … and it's a good blending of our skills and our team to deliver things together." Larson-Green says the two will work on first-party and third-party devices, a relationship that will likely be mutually beneficial if Microsoft can blend software and hardware even more closely. They'll have a helping hand, too. Rick Rashid, the founder of Microsoft's research division, is moving into the newly created operating systems group. His expert knowledge of the company's research work along with his previous OS experience might be key to bridging the gap the software maker has between thinking up great new innovations and delivering them as products.

The difficulty here will be truly blending the software and hardware experiences. Microsoft intentionally tied Surface to the Windows division — perhaps in some ways to boost its declining revenues — which saw Panos Panay, the man in charge of Surface, and Larson-Green working closely together on the software and hardware combination. They’ll be working even more closely in the new hardware group, but they won’t have the benefit of controlling software anymore. What that means for Surface is unclear, but Larson-Green’s promise of a close collaboration with Myerson will have to hold true to ensure the devices part of Ballmer’s vision is realized.

Of course, one of the most obvious and significant changes here is the merging of the Windows and Windows Phone divisions. Microsoft has been promising closer ties between the two, even noting a "common app platform" between Windows Phone and Windows in the company's outlook for the rest of 2013 and beyond. It's clear this will be a particular focus for Myerson, who was instrumental in Microsoft's Windows Mobile / Windows Phone reset. While Windows Phone updates have been lacking recently, the alignment should push common features closer together and reduce the lag time of Windows Phone waiting for Windows to work in change and updates before they can be adopted on the mobile side. 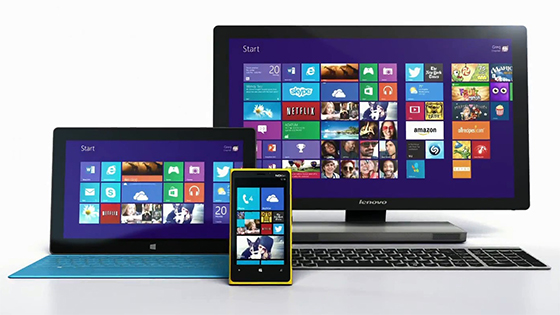 Does a family of devices include Surface Phone?

This close link could finally see Microsoft deliver its "three screens and a cloud" vision that it outlined two years ago. Ballmer talks about a family of devices, both first- and third-party, that are powered by a service-enabled shell. "We will continue to reinvent the core 'shell' of our family of devices and build upon what we have started with Windows 8," he says. The shell idea plays on the concept of Microsoft closely integrating its services and applications into Windows, with Bing being a great example of how this might play out in reality. Ballmer truly believes that "no technology company has as yet delivered a definitive family of devices useful all day for work and for play," a fundamental reason for Microsoft’s push towards Windows 8 and its Surface devices.

Microsoft's family of devices, that include third-party offerings, will be made up of "phones, tablets, PCs, 2-in-1s, TV-attached devices, and other devices," according to Ballmer. The phone mention could be a nod to a rumored Surface Phone, but it likely refers to third-party devices from Nokia, HTC, and others. "Developers must be able to target all our devices with a common programming model that makes it easy to target more than one device," says Ballmer. Microsoft dreams of shared applications and stores, and it's up to Myerson to make that a reality.

Ballmer will also have to tackle future Xbox software, while Larson-Green will handle the hardware requirements. It's a tricky balance, and Microsoft knows it. The current Xbox One team will remain in place until the console ships in November, but after that it's time to realign. Working with Xbox is a particularly difficult task, given its traditional way of running things differently from other business units at Microsoft and its unique consumer focus. It's just one of a string of challenges that underlines Ballmer's "One Microsoft" bet. 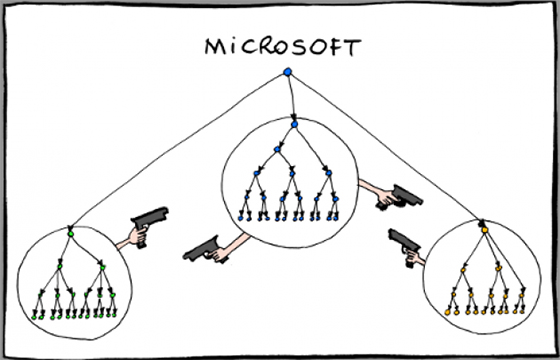 A fictional org chart that depicts Microsoft divisions pointing guns at each other.

What ties all these challenges together is an idea of collaboration. Microsoft has traditionally been structured in a way that rewards individual units for succeeding. This used to work, and the software giant has built up huge individual businesses like Windows, Office, and Server & Tools as a result. But it's also caused infighting, delayed products, and even years of missed opportunities for Microsoft. The company had the Zune, the Kin, the Courier, and countless other devices and services that failed because they didn't get enough support across the organization. If Windows didn't benefit from the Zune, why would it help integrate its services? If Xbox didn't benefit from the Courier, why would it assist in any way? Ballmer and his leadership team need to put away the guns and replace them with open arms.

Ballmer dreams of One Microsoft

There's a sense of urgency at Microsoft. Ballmer described the quick Windows 8.1 update "as the new norm for everything we do," during his recent Build keynote. "It’s about rapid pace of innovation." Microsoft can't sit around and watch others succeed while it stumbles to the market with products that are months or years behind the competition. It needs to fire on all cylinders if it wants to match its competitors and emerging startups that may change the way we use technology.

A true unification of Windows and a separate hardware division is a step forward, but Ballmer's "One Microsoft all the time" is the dream. He's taking a page out of another giant's book, namely the "One Sony" approach, and taking a risk today to ensure a more stable future. Microsoft isn't losing money right now, but it faces increasing competition with consumer spending focused on mobile devices. After being criticized by some for dragging his feet, Ballmer is finally pushing real change at Microsoft. It's now time to prove this latest change will work.