After months of investigation and repairs, it appears Boeing's new 787 Dreamliner is having troubles again. Both runways at London's Heathrow airport were shut down this evening local time after a fire broke out on a passenger jet. A statement from the airport provided to the BBC says that "the aircraft was parked on a remote parking stand" and adds that "there were no passengers on board and there are no reported injuries at this time." The plane in question is a 787 run by Ethiopian Airlines. Boeing has released an official statement on Twitter confirming the events, and it says it has personnel at the airport and is "working to fully understand and address this." The cause of the fire is currently unknown, but the events are similar to an incident in Boston earlier this year that prompted the FAA to ground all 787 travel. 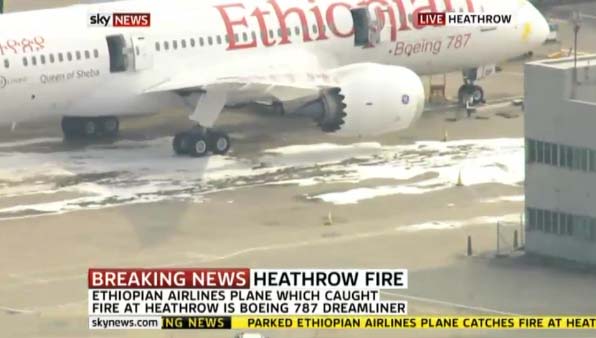 In late April, Ethiopian Airlines was the first to fly a commercial 787 flight after months of investigations that concluded in a redesigned lithium ion battery setup. The plane involved in today's incident, according to the BBC, is the same that was used for that first flight. The FAA first grounded all 787 flights in mid-January and after approving a battery redesign it gave the go-ahead to resume flights in April of this year.