Spec Sheet: Nokia's latest Lumia takes on the rest of the smartphone world

Spec Sheet: Nokia's latest Lumia takes on the rest of the smartphone world

Nokia unveiled its latest flagship smartphone yesterday, the Lumia 1020, and between its bulging camera and vibrant yellow casing, it’s been hard not to pay attention. The 1020 is Nokia’s latest flagship — its replacement to the Lumia 920 and 925 — and what’s likely to be Windows Phone 8’s biggest competitor against the iPhone 5 and the two biggest Android smartphones, Samsung's Galaxy S4 and the HTC One. Nokia’s hoping that the 1020’s camera will be enough to make it stand out — but can the rest of it keep up with the competition?

Against the iPhone 5, the Galaxy S4, and the HTC One

On the hardware front, the Lumia 1020 is set apart by its camera more than anything else. The 1020 has the largest camera sensor by far — that means it’ll take in a lot more light, and likely take a lot better pictures. That sensor is also packed tight with 41 megapixels, which are ultimately compressed into smaller 5-megapixel images that should turn out sharper and less noisy than those from the average smartphone. 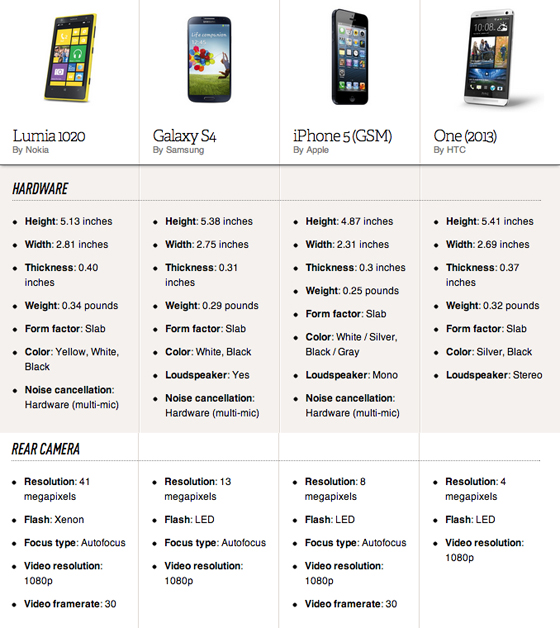 The HTC One takes almost the opposite approach. It has a standard sensor for a smartphone, but it uses a few large megapixels instead of a lot of tiny ones. As we found out, that approach has its drawbacks — even though it takes bright shots and has good low light performance, its pictures are soft and noisy, two areas that Nokia is promising its unique camera will handle well.

You should get a better picture on the 1020

The iPhone 5 and the Galaxy S4 have a much more straightforward camera. There’s no unique advantages to be found, but no unexpected tradeoffs either. You’ll get a good picture from both of them, but if the 1020’s camera is as good as Nokia promises, you should get a better one on the Lumia.

When it comes to size, the 1020 falls just a little bit behind. It’s a bit thicker and heavier than the other devices, though not by much. The 1020 is .4-inches thick to the iPhone 5 and Galaxy S4’s .3 inches, and it’s about half an inch wider than the iPhone. The Galaxy S4 and HTC One are actually a little bit taller than the 1020, but they’re also filling that space with larger displays.

The 1020 still has the same 4.5-inch display found on its predecessors. And though Windows Phone 8 should support 1080p displays soon, that hasn’t happened yet, leaving the 1020 stuck on WXGA resolution — which is just a little bit larger than 720p. Even though that may pale in comparison to the HTC One’s incredibly sharp 468 PPI display, the 1020's display is actually a bit more pixel dense than the iPhone 5's screen, and should still look great.

Nokia’s also promising over 13 hours of battery life on the 1020 — a pretty impressive figure if it’s to be believed. Apple quotes the iPhone 5 at only 8 hours, and while Samsung doesn’t estimate how long the S4’s battery will take you, it’s about 25 percent larger than what Nokia put inside the 1020.

Software is still a major difference

Of course, your biggest decision may still be based on the software that each phone is running. The iPhone is going through some big changes soon but has the strongest app ecosystem. And both the Galaxy S4 and the HTC One have some software tweaks that we aren’t exactly in love with, but they're both running the latest version of Android. But Windows Phone 8 is still limited compared to its competitors — it has no notification center and an improving, but limited app ecosystem, for instance — though it's getting better overall.

The 1020 also has one big hurdle in front of it: it comes in at $299, making it the most expensive of the four phones. The other three phones start at $199.99, though both the iPhone and Galaxy S4 come with only 16GB of storage. Both the One and the 1020 begin with twice as much, and you’d actually be looking at the same price tag for the 32GB iPhone. Even so, that's a lot to ask for when the best devices around are available for less.

Against the Windows Phone 8 competition

The 1020 has its work cut out for it against the broader market, but it’s a much different story if you’re picking the best Windows Phone around. The nearest competitors are HTC’s Windows Phone 8X and other Nokia devices like the Lumia 925 and the 920. The 925 is only a month old, but both the 8X and 920 debuted in 2012. But being a bit older has its advantages: because both phones have been out for a while, you can pick up the 8X for only $0.99 and the 920 for $99.99. 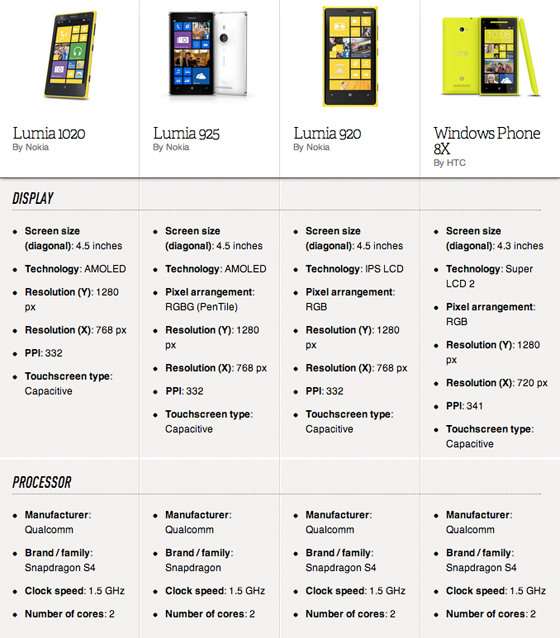 All four phones are pretty similar when it comes to size and internals. They’re around the same height, width, and thickness, aside from the 925 which is just a bit thinner. Though the 1020 has shed some of the heft of the 920, bringing it down to only .34 pounds, the 925 and 8X are still slightly lighter devices. All four have a WXGA or 720p display, similar battery capacity, and — aside from the 1020 — similar cameras, though the 8X does fall slightly behind in the latter two categories.

Similar inside, different outside

On the other hand, most of the phones have a very different physical presence. The 8X has a matte body that’s soft to the touch, the 1020 and 920 have stoic, firm polycarbonate builds, and the 925 augments that same polycarbonate with an aluminum frame. While the 1020 presents itself in a flashy yellow, it actually has a matte finish, unlike the 920 before it. Of the four, only the 920 offers built-in wireless charging — though Nokia does sell a rear shell for the 925 and 1020 that enables it.

So while each of the phones looks different, they’re markedly similar. The 1020 really stands out thanks to its impressive camera tech, but it may not be enough to justify its much higher price.

Here's a few other notable additions to the database this week: