Make way for Huawei: can the Chinese smartphone company buy its way into America?

Share All sharing options for: Make way for Huawei: can the Chinese smartphone company buy its way into America?

The Jonas Brothers took the stage last week in Chicago to kick off their comeback in front of thousands of screaming fans. Though the audience probably didn’t notice, the brothers were also kicking off a comeback for one of the most-maligned technology brands in the country: Huawei, the Shenzhen-based telecom and cell phone powerhouse that has been cast as an evil villain in the Chinese-American Cold War.

Huawei is a $35 billion company with a presence in 150 markets around the world. But here in the US, the conglomerate has had an icy reception. In October, members of Congress accused Huawei, based on scant evidence, of being a potential avenue for the Chinese government to disrupt "all aspects of modern American living." Huawei isn’t state-owned, but lawmakers assume that the government could leverage Huawei’s pipes to further its cyberwar on the US.

Huawei founder and CEO Ren Zhengfei broke his 25-year-silence to publicly deny the accusations. Still, Huawei’s business in the US flatlined. At one point, the company said it was giving up on America.

Now, eight months after being declared an enemy of the state, Huawei is the main sponsor for the Jonas Brothers 2013 tour. 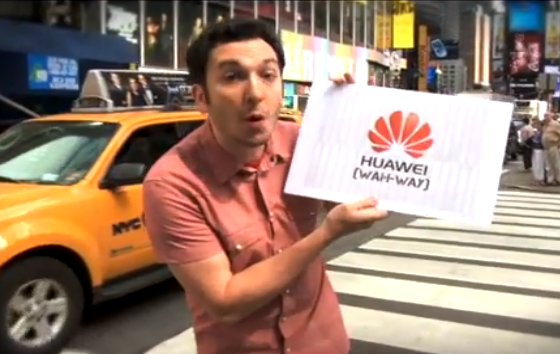 "We plan to be a leading smartphone brand in the coming years," Michael Chuang, executive vice president of the company’s US device division, said in a statement. "This sponsorship is just one of many things we will be doing in the coming months to carry out our promise."

In other words, Americans may be hearing a lot about Huawei.

In one 2007 survey, a majority of college students said that both Nokia (Finnish) and Samsung (Korean) were Japanese. If Huawei can get on shelves next to Samsung and Nokia, consumers won’t care if it’s Chinese — they’ll judge the brand by the quality of its phones. That means smartphones are the company’s best chance at making a good name for itself in the US.

Indeed, Huawei’s infrastructure division is no longer trying to penetrate the US market, said Avi Greengart, research director for consumer devices at the market research firm Current Analysis. However, the company "very much" wants to sell phones, tablets, wireless hotspots, modems, and other mobile devices here.

"Huawei doesn’t have a brand image problem in the US with consumers," he said. "They simply don’t have a brand. Consumers have never heard of them. They don’t know how to pronounce the name. They have no association with the brand, positive or negative."

"Consumers have never heard of them. They don’t know how to pronounce the name."

That blank slate is preferable to the image of Huawei as an evil megacorporation ready to do Beijing’s bidding. However, Huawei has a second problem with entering the US market: building a relationship with the major carriers. Huawei has been quite successful with the second-tier carriers MetroPCS and Cricket and in the prepaid market. The company says it is "very pleased" with the sales of the midrange $229 Ascend W1, the first Huawei-branded smartphone to be sold at Walmart.

However, the major carriers only work with Huawei when they need cheap, unbranded phones. That’s because they already have a fully fleshed portfolio of phones from manufacturers like HTC, Samsung, Apple, LG, and, at the lower end, Kyocera and Pantech. Huawei’s phones are comparable to other brands, but there just isn’t a compelling reason for the major carriers to add Huawei’s devices to their lineups. The ultra-thin P6, ultra-fat MediaPad Vogue 7, or generally satisfactory W1 all failed to entice the carriers.

"Huawei is a company that for years was focused more on price than on achieving the highest possible quality," said Sascha Segan, lead analyst for PC Mag's mobile site. "Now they are shifting gears. Huawei is definitely trying to shift customer perception around the world, from someone who makes cheap and midrange phones to somebody who can compete on innovation and quality with Samsung. It’s Samsung they really have in their sights."

Huawei still has some distance to go to get to Samsung’s level. PC Mag has reviewed 25 Huawei phones over the past few years, Segan said, and only one got a four-star rating. That was the Huawei Mercury, which PC Mag gave four-and-a-half stars and named "the best prepaid smartphone in America."

Despite all the challenges, it’d be short-sighted to bet against Huawei. The company has deep pockets, and it’s playing the long game. Like other Chinese companies, it’s able to undercut competitors on price — just as Samsung undercut Apple five years ago. With 10 to 12 percent of revenue devoted to research and development every year, it may not be long before Huawei comes out with a killer phone that Verizon, AT&T, Sprint, and T-Mobile would be unwise to pass up.