Laptops are getting thinner, lighter, and smaller. How far will it go?

Note: be sure to read our 13-inch MacBook Air review for lots more on Apple's latest laptops.

When my parents bought me my first laptop, I fought tooth and nail to spend the extra money and get a bigger model. The 15-inch Dell Inspiron E1505 I cajoled them into purchasing was backpack-fillingly large and back-breakingly heavy, but man did it have screen space.

Eventually, my computing needs changed. My laptop stopped being my TV, my game console, my desk, and my serving tray for late-night Bagel Bites. I needed a computer that was powerful but not quite so huge. So I bought a 13-inch MacBook Pro, which served me well until I dropped it one too many times and downloaded one too many torrents, at which point it clutched its chest and collapsed in my living room. This time I bought a 13-inch MacBook Air.

Now, two-plus years of liveblogs and cross-country flights later, it’s falling apart — one of the USB ports only works half the time, audio output is horribly inconsistent, and it’s always a desperate sprint to make it through a meeting before my battery croaks. It’s time for a new machine.

I always had a bit of buyer’s remorse, too, having not bought the 11-inch Air in the first place. It’s smaller, lighter, and otherwise ostensibly the same thing as its 13-inch brother. And at $999, it’s cheaper to boot — even though its solid-state storage has been doubled to 128GB. So when the new Haswell-powered model crossed my desk, it became more than a review unit. It was a tryout.

As Nilay mentioned in his review of the larger model, there’s really nothing aesthetically new with the latest Air. The one miniscule change is the same between models: there’s a second microphone on the left edge, designed for noise cancellation. (I can’t say I had a problem with audio before, but the new setup does cancel out ambient noise impressively well.) For all intents and purposes the 11-inch model looks the same as always, with black keys and accents on a silver body. I still love the wedge design, and there are few things I’d like Apple to change about the Air’s hardware.

The 11-inch Air weighs six-tenths of a pound less than the 13-inch model, and would fit inside the larger machine with an inch or so to spare on either side. That’s its advantage, really its sole reason for existence — it’s small. And it is small, noticeably more so than the 13-inch Air. Of course, at 0.68 inches thick (the same as the 11-inch) and 2.96 pounds, the large model isn’t exactly my old E1505. 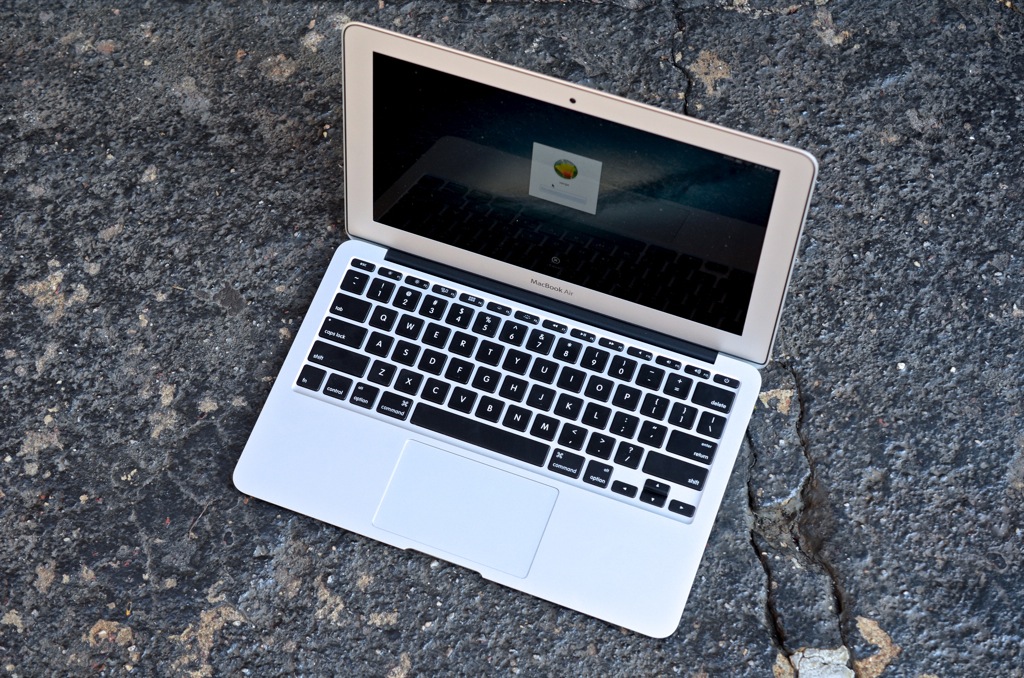 Small is good. But in the time I’ve been using the 11-inch Air, I’ve found a handful of sacrifices you make by choosing the smaller model. The first is an SD card slot — this might not matter to most people, but I’m constantly using SD cards to offload photos or share files, and I hate always needing another dongle, in addition to the USB-to-Ethernet cable and USB hub I already have to carry, because the Air is pretty sparse on ports to begin with. 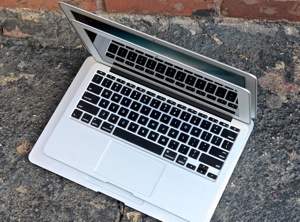 The second diminutiveness-related loss is a shrunken palmrest and trackpad. When the keyboard’s the same size and the whole thing’s an inch shorter, something else had to give, but the big, roomy trackpad is one of the things I most enjoy about the Air in the first place.

The 11-inch Air’s trackpad is still smooth, responsive, and easily the best in its class, but it’s not as good as the larger model just because there’s not as much room to roam. I can’t scroll as quickly or move around the screen in a single swipe anymore, and the whole computer just feels slightly cramped in a way a larger machine doesn’t. I found myself sitting closer to it, hunched over 12 inches away from the screen, staring into the bright display. 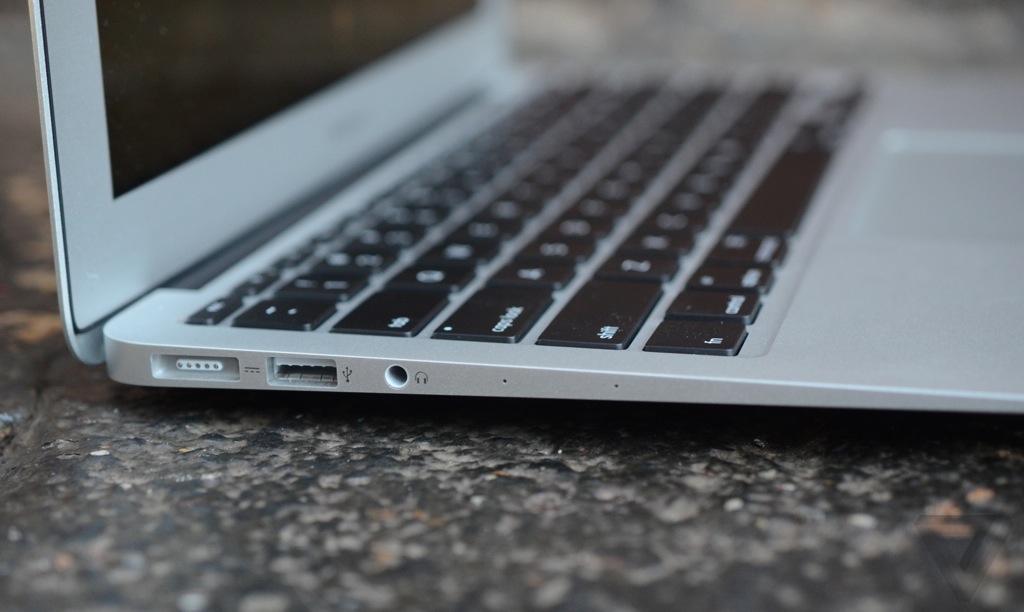 This is the ongoing story of the 11-inch Air: tiny computers require tiny sacrifices. Though its 11.6-inch, 1366 x 768 display is actually slightly sharper than the 1440 x 900, 13.3-inch display on the larger model (135ppi vs. 128), that doesn’t change the fact that the smaller display makes multitasking harder and isn’t as good for watching movies. Plus, both screens start to look old-fashioned next to the super high-res screens on the MacBook Pro with Retina display, or the Sony VAIO Pro, or the Toshiba Kirabook.

Even battery life is great without being quite as good as the larger Air. I got 10 hours, 23 minutes on the Verge Battery Test, which cycles through popular websites and high-res images at 65 percent brightness, while in Safari. In Chrome, that number was 8 hours, 51 minutes. Both are class-leading numbers, except when compared to the larger Air and its astonishing 13-plus hours of longevity.

Performance is otherwise roughly what I expected — very slightly better gaming and graphics performance, and better compatibility with the latest Wi-Fi standards thanks to a small upgrade from Apple. But it's basically identical in everyday use — it's fast and smooth, though there's the occasional stutter and scrolling jump — and nearly equal in GeekBench scores as well (6,113 on the current model). Since they both run the same 1.3GHz Core i5 Haswell processor with 4GB of RAM, there’s no obvious difference between sizes, either. Or even between Haswell and Ivy Bridge, except for that ridiculous battery life. 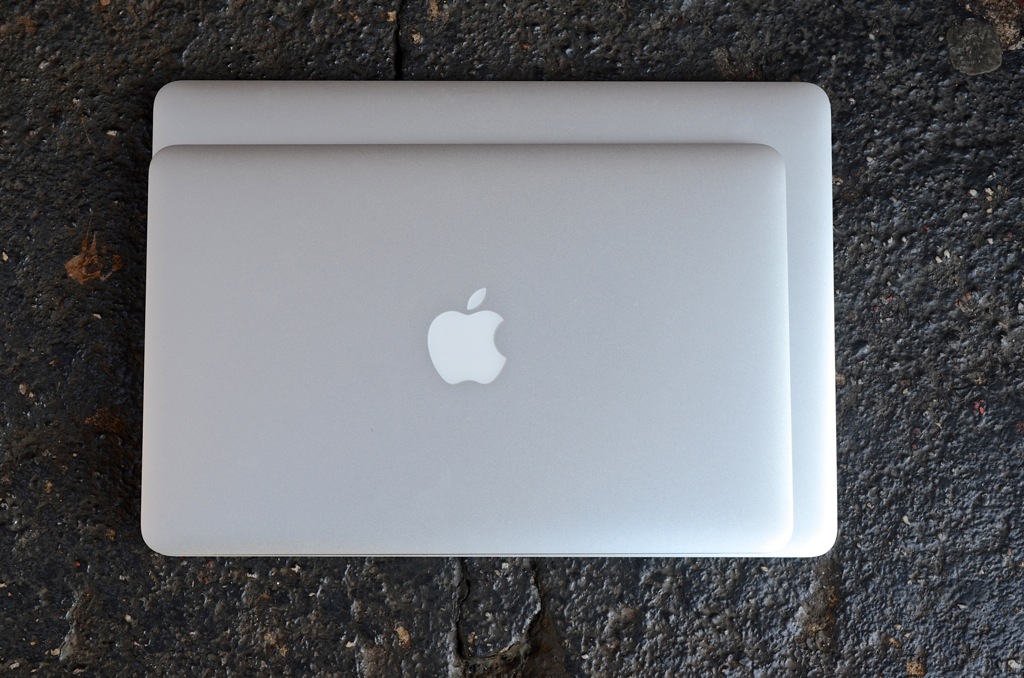 Small is good, but bigger is better

There's exactly one reason you should buy the 11-inch MacBook Air: you want the absolute smallest computer you can buy, and you don't want a Windows PC. There are plenty of reasons to buy an Air, from the fantastic battery life to the world-beating keyboard and trackpad, but only buy the $999 11-inch model if small is your endgame. If small is your endgame, though, the Sony VAIO Pro is even smaller — but you're probably better off with a device like the Lenovo Yoga 11S, because the touch- and tablet-friendly modes are so well-suited to a device this size. I’m increasingly convinced 11.6 inches is the perfect size for a tablet / laptop hybrid device like the HP Envy X2 or the Yoga 11S. But without a touchscreen, without the eminently adaptable Windows live tiles, the 11-inch Air just feels like a laptop made slightly too small.

The 13-inch Air is plenty small and plenty portable, and from the bigger screen and roomier touchpad to better battery life and SD card slot, it’s just a better laptop. Spend $100 more, buy a slightly larger bag, and get the big tiny computer. That’s what I’m doing, anyway.