Google's updated Play Store includes mention of Glass, implying that the company's headset will be managed through the store soon. Users who have linked Glass with their Google account have been seeing the device in the site's "compatible devices" list when viewing apps. The change is part of a visual overhaul of the Play Store that was announced at Google IO, bringing the web view in line with the company's Android app. Like the recently-updated Android storefront, the new design features Google Now-style cards, making everything look a little more organized. 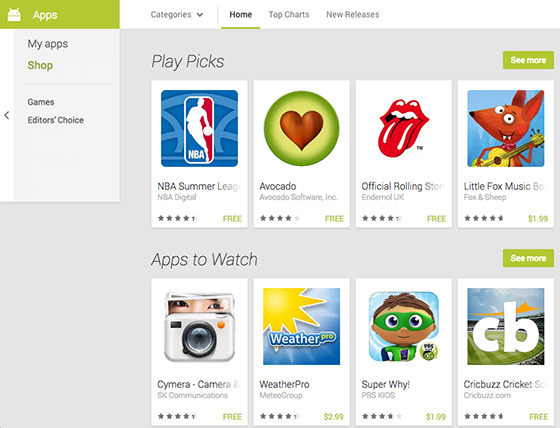 Users could discover and install apps straight from Glass

Bringing Glass support to the Play Store would streamline managing the device significantly. To install apps to Glass users are currently required to log into a Glass-specific portal on another device. Android and Me posted a screenshot revealing that a Play Store application is also on its way to the device, opening the door to on-device app installation for the first time. The screenshot shows a short message noting that "you have not opened the Google Play Store app recently on this device. Please open it and try again."

Play Store support could also open the door to native apps on Glass. None of the apps released during Google's soft launch of the headset have been native APK files (the standard packaging format for Android applications). Instead, Glass currently only supports "Glassware" applications, which are fairly basic in their scope. A recent Glass update brought a full web browser and contact management support, but close examination revealed that full APK support could be on the way.

Google employs a one-app strategy for Android — the same app runs on a 4-inch smartphone or a 10-inch tablet, with the layout expanding to fill the display. While it's not sure that we'll see regular apps on Glass's tiny display, Google could allow developers to code their apps to run across smartphones, tablets, and Glass. Even if native apps never happen, putting Glassware apps within the Play Store makes a lot of sense; giving users access to all of Google's apps, books, music, and videos in one location.