Acer's Iconia W3 is the first of its kind: an 8-inch Windows 8 tablet. It marks the start of a new category of smaller Windows tablets that are expected to debut over the coming months. When Windows 8 originally debuted in October it inspired PC makers to try out various hardware designs, but most focused on 10-inch tablet-like devices. Manufacturers avoided smaller devices in order to support the minimum resolution required for Windows 8 tablets. Microsoft recently altered that resolution rule, though, and we’re finally able to explore the possibility of an 8-inch Windows tablet.

The Iconia W3 enters a small tablet category that's dominated by devices like the iPad mini and Nexus 7. Does this smaller tablet fare well against the competition? And while at $379 it’s certainly a bargain for a full-fledged Windows PC, is Windows 8 ready for a new breed of devices?

When I first picked up the W3, I was immediately surprised by the weight of it. At 500g (just over a pound) it's much heavier than the iPad mini or Nexus 7, and it's a lot chubbier too. The entire screen is encased in cheap-feeling plastic, with a black bezel around the display, a white casing, and a gray rear. The colors complement each other to make the device look less cheap, but even though it looks okay, it doesn’t feel that great.

The all-important part of a tablet is its display. It's the sole interaction point for this type of device. Simply put, the W3's display is disgusting. It's shockingly bad in a number of ways. When I first tried the W3 I assumed it had finger grease on the display, but a quick clean confirmed that the screen is just so grainy that it looks like someone dropped it in a swimming pool. Using this device transports you back to a world where manufacturers struggled to build displays properly. It feels like a resistive device from 10 years ago. 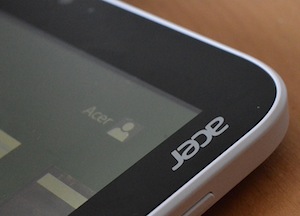 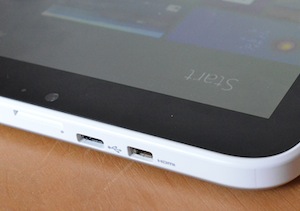 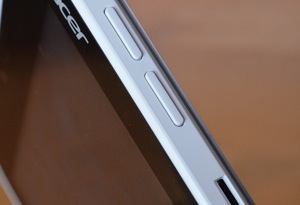 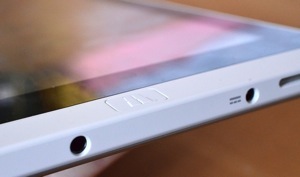 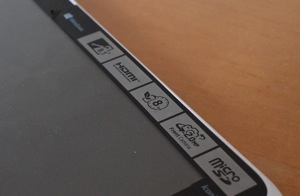 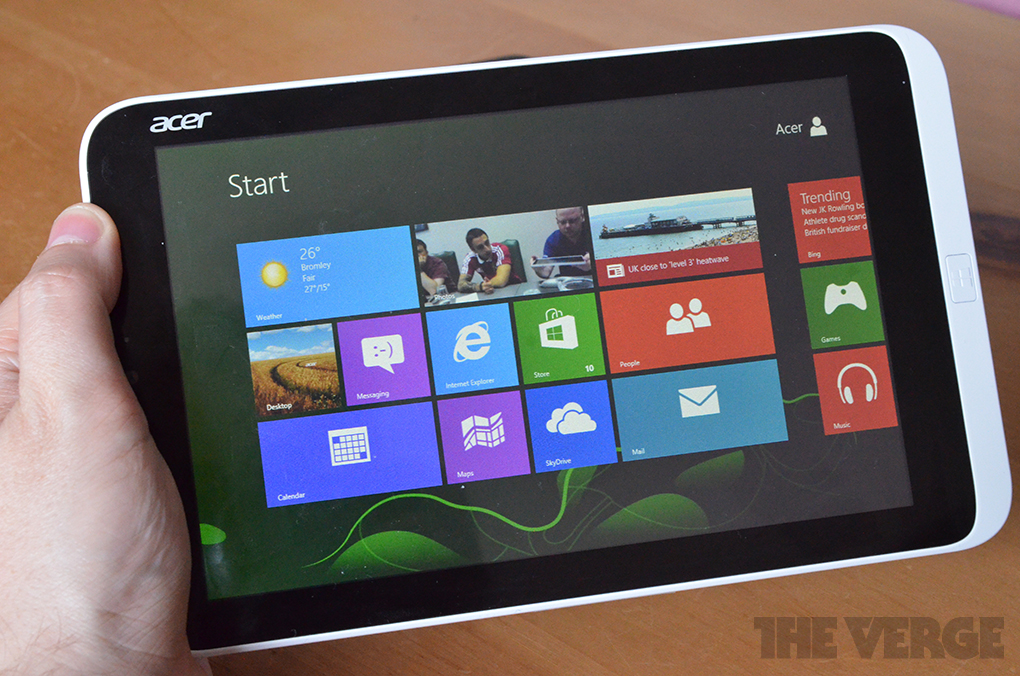 Viewing angles are nonexistent — it’s like having to position yourself years ago for a 3D movie. The only saving grace is that it runs at 1280 x 800 resolution. That's still not enough to support Snap View in the current version of Windows 8, but I almost expected something even lower. I have no idea why Acer didn't opt for an IPS display like the ones found in the iPad mini or Nexus 7, but its choice of panel and construction makes the W3 display unusable as a small tablet for reading and content consumption — which are the things 8-inch tablets are best for. It's the worst aspect of the W3, and it's a deal-breaker.

The mountain of stickers on this device doesn’t help its look, either. There's a giant one on the display showing meaningless specifications, and Intel, Windows 8, and FCC ones on the rear. There's even a barcode on the side. You can remove some of them easily, but if you were under any illusion that this is a premium device, the stickers immediately remind you exactly how wrong you were.

One advantage of Windows tablets is that they have accessory support that's not often found on rival Android or iOS devices. Acer has supplied Micro HDMI and Micro USB ports on the W3, with a dongle attachment that converts the Micro USB into a full USB port. You can't charge the W3 via USB (it has a separate power connector) but USB is always useful if you want to plug in a printer, mouse, or USB key. Inside there's 32GB of storage, which can be boosted by a microSD slot on the side. 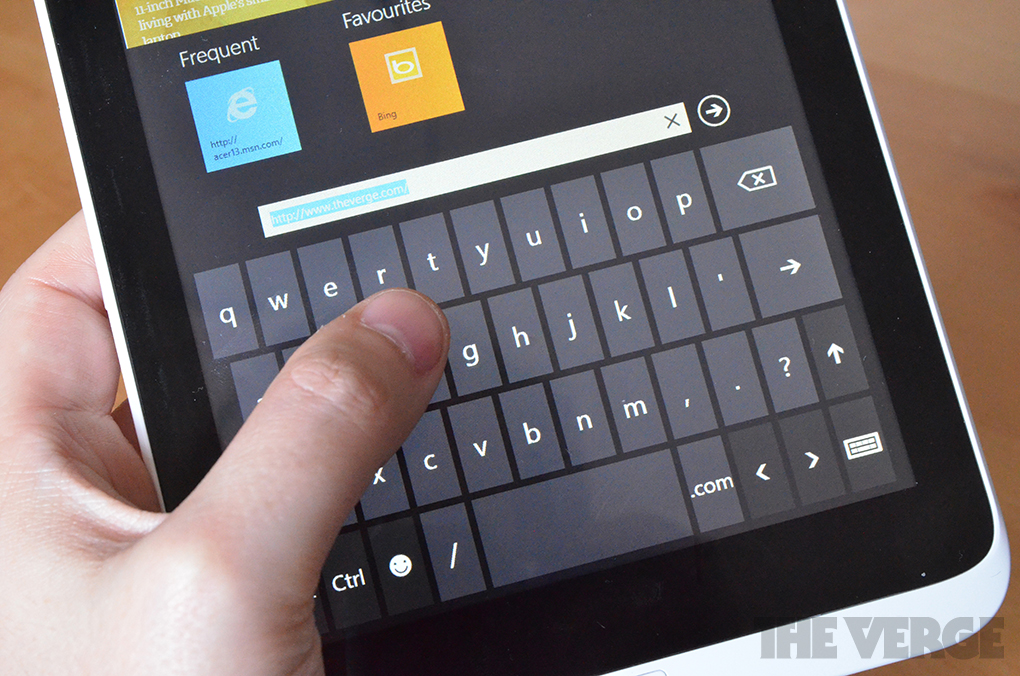 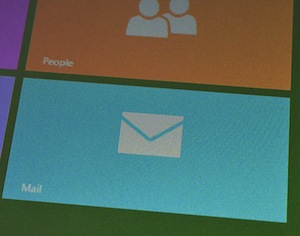 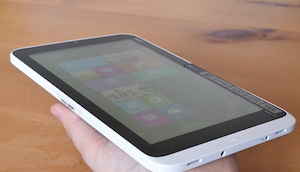 The W3 is truly a budget device, powered by a dual-core, 1.8GHz Intel Atom processor. The advantage is that you'll get a full version of Windows 8, and the ability to run those all-important desktop apps. The disadvantage is you know from the start it’s going to be slower than larger tablets equipped with Intel’s Core processors. It won’t support 64-bit desktop apps, either, but that’s not really an issue since you’ll mostly be using the new “Metro-style” applications.

Most of the time I use Windows 8 tablets I’m almost forced to use them horizontally because of their size and 16:9 aspect ratio. I’ve never found a 10-inch Windows 8 device that feels comfortable in portrait mode — it’s simply an odd experience. The W3, on the other hand, begs to be used this way, and it works surprisingly well in portrait mode despite the horrible display. It’s largely thanks to the 16:10 ratio, and at 8 inches it feels more natural and it’s definitely a lot more comfortable. As the resolution doesn’t support Windows 8’s current requirement of 1366 x 768 for Snap View, you won’t be able to snap apps side-by-side, even if you use the device horizontally. I primarily used the W3 in portrait mode so I didn’t find that too limiting, but I do miss the ability to snap an app like Twitter to the side to see quick bursts of information.

Windows 8 is surprisingly good on an 8-inch tablet like the W3. Apps like Internet Explorer and Kindle are great for reading, and the portrait mode of the OS fully supports the Live Tiles by shifting them to display in a different layout. There are some drawbacks here that get rather irritating, though. The Music and Video apps only support horizontal modes, so you’ll be forced back to using the W3 in landscape if you enter either of these apps — same for the Windows Store. Third-party app developers always have the option to push users into landscape mode, but I would have expected Microsoft to better support the portrait mode through its own first-party apps. It’s a jarring experience, and it really ruins the ability to quickly flick through Windows 8 applications. 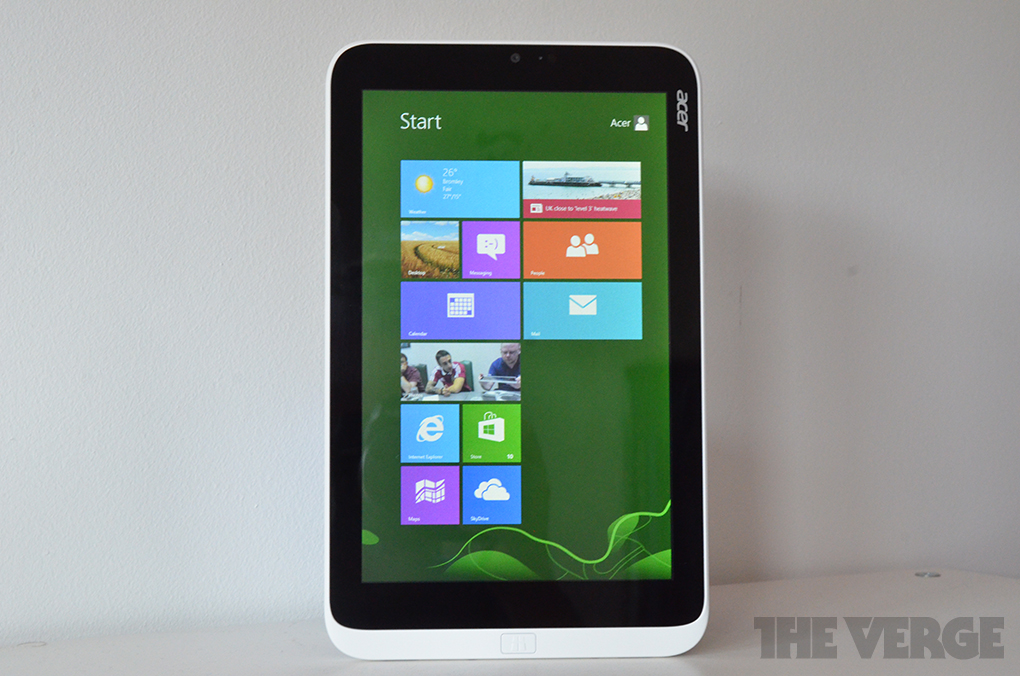 I found myself primarily using the desktop for some PC settings not found in the “Metro-style” world, though it’s also perfectly capable of running apps like Photoshop or Chrome. Acer has also bundled cloud-enabled photo and doc apps alongside Norton’s online backup software — most are redundant, rendered useless by built-in services like SkyDrive. Acer hasn’t piled a lot of crapware into the desktop mode, but it is including a large number of Metro-style apps like eBay, Netflix, Kindle, Evernote, and Skype. They’re all pinned to the Start Screen under an “Acer Apps” section. Most of the bundled apps are good examples of Windows 8 apps, so it’s encouraging to see Acer pick those out over the typical crapware that ships with PCs.

The W3 also comes with a full copy of Office Home & Student 2013, a perk usually reserved for Windows RT tablets. It’s not heavily optimized for touch, and it can be frustrating to use in apps like Excel. It’s an odd choice on an 8-inch device, but given that the W3 can easily be connected to an HDMI-compatible display along with a mouse and keyboard, it starts to make a lot more sense. The Atom processor is underpowered for any serious work, but if you’re on the go and you want to connect to a secondary display then it’s always an option. As these devices become more powerful, this might be the future of the desktop PC: you carry around a single device that plugs into additional ones. As it stands, the desktop mode isn’t optimized for touch. The W3 is really designed for Microsoft’s new range of Windows 8 apps.

Windows 8.1 will fix a lot of the Iconia W3's shortcomings

Many of the shortcomings on the Windows 8 side will soon be addressed, too. Microsoft is finishing up a Windows 8.1 update (see our preview here) that includes changes specifically designed for new 7- and 8-inch devices. It adds portrait improvements to the Start Screen, smaller Live Tiles, and a Reading List application that’s designed to collect URLs and app snippets to read later. It also includes redesigned Video and Music apps with portrait support. On the W3 you’ll be able to access the webcam from the lockscreen quickly to capture photos, or accept video calls from Skype. Perhaps the biggest improvement for Windows 8.1 is the introduction of new Snap Views that support lower resolutions. I tested the W3 with Windows 8.1 and was pleased to see I could snap applications side by side in landscape mode. On the software side, it seems like Windows 8.1 is well suited to these new devices, but the hardware is lacking on the W3. 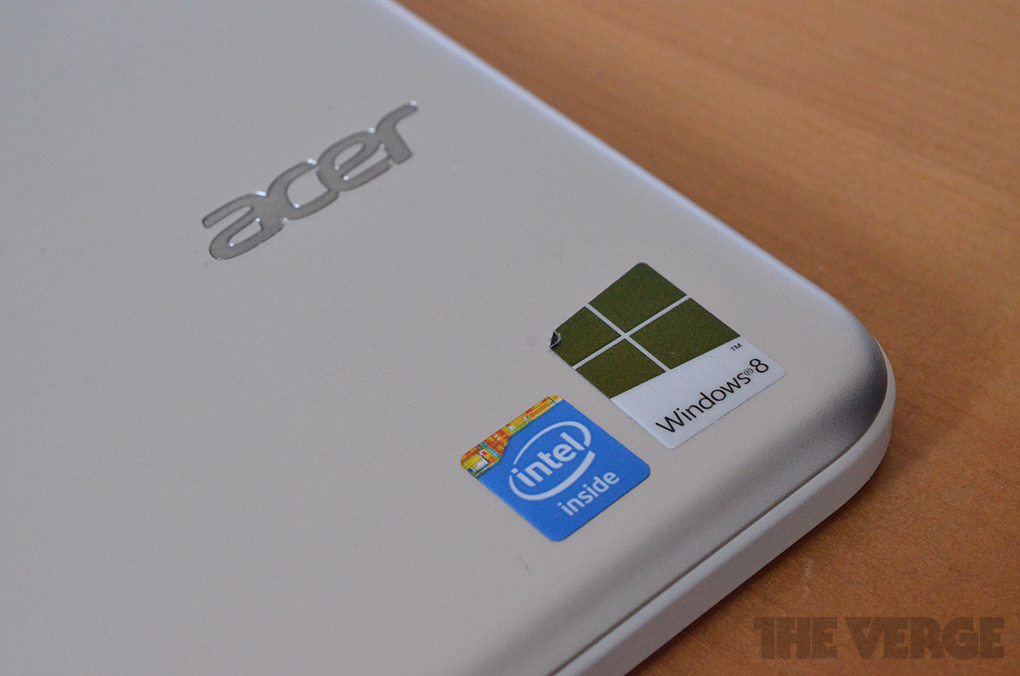 Long-lasting, but no powerhouse

Intel’s Atom processor delivers solid performance here, and reasonable battery life too. The Verge Battery Test, which cycles through a series of websites and images at 65 percent brightness, scored it at 8 hours and 23 minutes. I’m a moderate tablet user so I didn’t find myself having to charge the W3 that often, and it sits in standby well enough to avoid having to top it up frequently. Performance on the W3 was consistent with other Atom-powered tablets I’ve tested. Most casual games like Jetpack Joyride and Cut The Rope ran reasonably well, with some occasional lag and low frame-rates. However, I wouldn’t recommend Steam titles on this device, which really starts to struggle even on casual games like Hydro Thunder.

There’s no way I can recommend the W3 right now, at all. It’s the first 8-inch Windows 8 tablet, but the hardware sucks. Acer can do so much better here, even for a budget device. The screen is shockingly bad, and that’s the main way you’ll interact with this device unless you’re set on using it with an optional dock / keyboard or you want to hook it up to a HDMI display. Either way, there are many better devices that work as tablets or notebooks out there right now, and the W3’s only unique offering — its 8-inch screen — is its biggest fault.

Still, the W3 leaves me excited. Not for this device, but for what device makers could create for the 7- and 8-inch Windows form factors. As most of these will debut with Windows 8.1, the software quirks will be mostly corrected, and iPad mini-like hardware coupled with Windows 8.1 could be an attractive device that I would immediately use. I find myself increasingly less reliant on apps on a small tablet device, instead using it as a reading device like the Kindle. With official Facebook and Flipboard apps on the way for Windows 8.1, it feels like the crucial gaps for these types of devices are being covered. It’s also essential that these small tablets offer some 3G or LTE connectivity as an option. The W3 lacks this, and I’d like to see most 7- and 8-inch Windows tablets offer this in some way.

Ultimately, it might be up to Microsoft to really make this form factor shine. This first effort from Acer is cheap and plasticky, and I can’t help but feel that Microsoft won’t want all these smaller Windows tablets to head down the bargain route. A Surface mini feels inevitable, and with Windows 8.1 it will make a lot of sense. For Acer, it’s back to the drawing board. A refreshed W3 with an IPS display would be a good start, and losing some of the unnecessary weight would also help make this device a little more appealing. Hold onto your dollars until we start to see better 7- and 8-inch Windows tablets.