Rolling Stone is facing harsh criticism for publishing what many describe as a rock star-like cover photo of Dzhokhar "Jahar" Tsarnaev — the 19-year-old native Chechen accused of carrying out the Boston Marathon bombings on April 15th. The magazine unveiled the cover of its August 1st issue on Tuesday, describing Janet Reitman's lead story as "a riveting and heartbreaking account of how a charming kid with a bright future became a monster." Rolling Stone also highlighted the piece's most salient revelations, but it's the issue's gauzy cover photo that has stirred the most controversy on Twitter and other social media sites.

Nice. Rolling Stone front page. Something for future nutjobs to aspire to. http://t.co/JMg5Pe1mve (via @heawood)

The backlash spread quickly across the internet Tuesday evening, with many Twitter and Facebook users describing Rolling Stone's photo choice as "irresponsible" and "tasteless." Some have argued that the softly lit self shot only glamorizes Tsarnaev's acts and that it will only fuel his small but devoted group of sympathizers.

Members of the so-called Free Jahar movement gathered outside a Boston courthouse last week when Tsarnaev made his first public appearance since being indicted on 30 federal counts. Some donned t-shirts that read, "Dzhokhar Tsarnaev Is Innocent," while others held signs alleging that the teenager is a victim of some larger conspiracy or false flag operation.

.@RollingStone Which #teen sensation will grace your cover next?!

Some Tsarnaev supporters were actually upset over Rolling Stone's decision, claiming that the magazine unfairly labeled him guilty before his trial has begun. Tsarnaev has pleaded not guilty on all 30 terror charges.

Rolling Stone's image, pulled from Tsarnaev's Twitter profile, has appeared in other media outlets before — most notably, on the cover of the New York Times. But for many, the cover of Rolling Stone carries a different iconography, one associated more with rock stars and celebrities than suspected terrorists. (Dr. Hook & The Medicine Show famously sang about the magazine — and the success its coverage can bring — in its 1973 single "The Cover of Rolling Stone.")

That Dzhokhar selfie on the Rolling Stone cover was everywhere at the time. It was on the front page of the Times! pic.twitter.com/ix0KreMst7

Tsarnaev's curly locks and intent stare have already drawn comparisons to others who have graced the magazine's cover, including Jim Morrison and Madonna. It doesn't appear that the magazine dramatically modified or enhanced the image, based on original versions that surfaced online in April.

…blast from the past from @RollingStone pic.twitter.com/t4korxnYCb

According to Rolling Stone, Reitman spent two months interviewing "dozens" of people close to Tsarnaev, including childhood friends, teachers, and neighbors. In the piece, she describes Tsarnaev's gradual transformation from normal teenager to suspected terrorist — a metamorphosis that was spurred both by his unstable family and the psychological frailty of his older brother, Tamerlan. The elder Tsarnaev was killed during a shootout with Boston police in April, and is widely believed to have played a critical role in pushing his younger sibling toward radical Islam.

The Verge has reached out to Rolling Stone for comment. 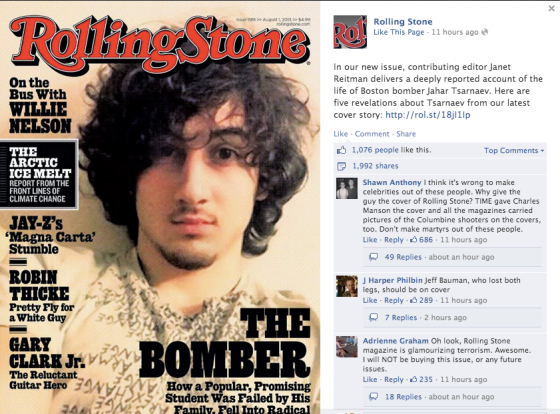 Update: In a statement posted by CNN, Rolling Stone has sought to address the massive controversial caused by the cover.

Our hearts go out to the victims of the Boston Marathon bombing, and our thoughts are always with them and their families. The cover story we are publishing this week falls within the traditions of journalism and Rolling Stone's long-standing commitment to serious and thoughtful coverage of the most important political and cultural issues of our day. The fact that Dzhokhar Tsarnaev is young, and in the same age group as many of our readers, makes it all the more important for us to examine the complexities of this issue and gain a more complete understanding of how a tragedy like this happens.

Update: Several major American convenience stores have announced that they won't be carrying the issue of Rolling Stone when it's released. The stores include CVS, Walgreens, and Rite Aid as well, according to The Huffington Post. There's no word on whether Walgreens' subsidiary, Duane Reade, will also refrain from carrying the issue.