Lawmakers blast phone surveillance dragnet: 'we have a very serious violation of the law'

Can Congress rein in its own demons?

Share All sharing options for: Lawmakers blast phone surveillance dragnet: 'we have a very serious violation of the law'

US lawmakers expressed outrage and indignation in front of senior intelligence community officials this morning in a House Judiciary Committee hearing on the government's massive telephone metadata collection program, known as the Associational Tracking Program. Top officials from the US Department of Justice, the National Security Agency (NSA), the FBI, and the Office of the Director of National Intelligence were grilled over the widespread collection of telephone records under the program, which feeds information about every call placed in the US through major telecommunications companies including Verizon, AT&T, and Sprint.

The government has faced intense public scrutiny since the extent of the program, which has been collecting all call records in the US for the past seven years, was revealed last month. The ACLU has called the program "one of the largest surveillance efforts ever launched by a democratic government against its own citizens."

Responding to public scrutiny, a majority of representatives in today's hearing scrutinized the metadata collection program. Rep. John Conyers (D, MI) was among the most vocal critics of the behavior of the intelligence community; referring to protections offered under the Fourth Amendment, which prohibits unreasonable searches and seizures of US citizens, Conyers told the witnesses that "you've already violated the law as far as I'm concerned." "I feel very uncomfortable about using aggregated metadata on hundreds of millions of Americans — everybody, including every member of Congress, and every citizen who has a phone in the US," Conyers said. "This is unsustainable, it's outrageous, and must be stopped immediately."

"The Fourth Amendment does not mention national security."

Some representatives echoed Conyers' outrage, opting to use their questioning time for speeches about the surveillance program. A fanciful history lesson from Rep. Ted Poe (R, TX) took the hearing room back to rule under King George III; "The Fourth Amendment does not mention national security," Poe said. "I hope we don't get to a point in this country in the name of national security that we infringe and bruise the Fourth Amendment." 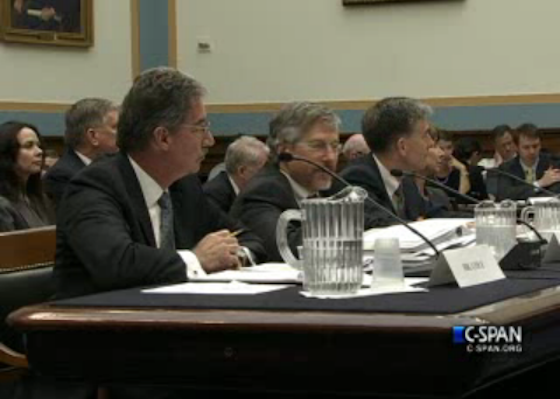 Other lawmakers made more focused inquiries. Rep. Zoe Lofgren (D, CA) prodded witnesses about their allegedly inadequate reporting to Congress about the government's surveillance activities. "I don't question your motivation which is to keep America safe," Lofgren said, "but the concern is that the statue we crafted so carefully may not be adhered to as envisioned by us and as is being reported to us." Lofgren referred to an annual report provided to the committee about its surveillance activities under Section 215 of the Patriot Act — the authority the NSA and FBI use to justify metadata collection — which she said was no longer than one page in length. "I think that very clearly this program has gone off the tracks legally and needs to be reined in," Lofgren said.

Since the telephone metadata program was revealed, the intelligence community, some members of Congress, and the Obama administration have defended its legality and use. Most of these defenses, including those offered at today's hearing by the DOJ, NSA, and FBI, involve a 1979 Supreme Court decision, Smith v. Maryland, which established that people do not have a "reasonable expectation" of privacy for electronic metadata held by third parties, like, for instance, your cellphone provider. That data is not considered "content," theoretically giving law enforcement more flexibility in collecting it.

The issue of content came up again in today's hearing, with Deputy Attorney General James Cole testifying that geolocation data may fall into some sort of grey area where the law is "evolving," prompting concern from Rep. Jason Chaffetz (R, UT). "How is it evolving?", Chaffetz said. "This is what scares me about what you're doing and how you're doing it. If you knew exactly where I was standing, you're telling me that's not content?"

Supporters of the government's telephone surveillance program also argue that "collection" of metadata is not the same as "access," and since all requests for access are approved by the Foreign Intelligence Surveillance Court (FISC), that the program contains essential checks and balances. But the FISC is a secretive court whose opinions are held from the public, with members directly appointed by the chief justice of the Supreme Court, which only receives appeals from the government — leading critics to question the integrity of judicial oversight. "Our whole justice system is set up in an adversarial way," Lofgren said. "When you only have one party there, the expectation that our system will work well as it does in other environments is misplaced."

Even lawmakers sympathetic to law enforcement questioned the extent of the government's authority. "Im satisfied at least from what limited knowledge I have that the motivation behind this was legitimate and necessary for our national security," said Rep. Spencer Bachus (R, AL). "How do we keep this from evolving into an unchecked weapon by the government to violate people's constitutional rights?"