Is a proper successor to the Nexus 7 coming at next week's Google event? Internal OfficeMax documents obtained by Engadget suggest it's a very real possibility. The leaked visual planning instructions make specific mention of a new 32GB version of Google's 7-inch tablet, complete with a unique UPC and OfficeMax item number. The revised Nexus 7 is allegedly set to arrive at OfficeMax stores as early as July 20th, though we can't imagine it would go on sale prior to Google's July 24th gathering.

The retailer wants its stores to place the "new Nexus 7" next to the current (but apparently soon to be "old") model. It appears OfficeMax will be selling both devices simultaneously, though it remains to be seen how long Google will continue selling the Asus-branded hardware after the long-awaited refresh. OfficeMax's strategy seems to be an attempt to deplete stock more than anything else; the company says stores will only be able to sell demo units of the original Nexus 7 once other supplies are exhausted.

Other than the listed storage capacity, we've heard few concrete details on what to expect from Google's next flagship Android tablet. Earlier today, Android Central published what it claims to be leaked pricing for the device; a 16GB SKU will reportedly sell for $229, whereas the 32GB cited by OfficeMax would retail for $269.

Update: Android Central has now posted purported images and a video of the upcoming Nexus 7 successor. The device seen here is again manufactured by Asus. Gone is the textured rear case, and this time the "Nexus" logo is etched at a landscape orientation. Other than that, the hardware isn't drastically different from the original Nexus 7, with similar placement of the power and volume buttons. The photos do reveal that this Nexus tablet features two cameras and dual speakers, with unconfirmed specifications pointing to a colossal 4GB of RAM. Whether we're looking at an early prototype or the final hardware destined for consumers is unclear, however. 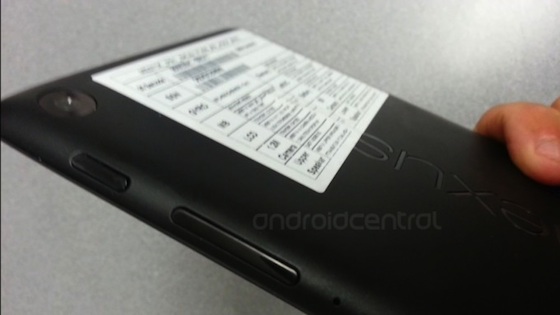