HTC One mini vs. Samsung Galaxy S4 mini: which shrunken flagship is best?

Share All sharing options for: HTC One mini vs. Samsung Galaxy S4 mini: which shrunken flagship is best?

HTC has just announced the HTC One mini, a 4.3-inch version of its flagship phone. From the outside, it looks very similar to the One that HTC released earlier this year to critical acclaim. Inside, however, something had to give, and there are some notable differences. The HTC One mini has a Snapdragon 400 processor (rather than the Snapdragon 600 found in the original), 1GB of RAM (rather than the 2GB of the One), and a lower-density 4.3-inch 720p display. It does, however, feature a similar Ultrapixel camera, although the mini's doesn't have optical image stabilization. The Taiwanese manufacturer isn't the only one creating a miniature version of its product — Samsung also has a Galaxy S4 mini — so how does HTC's effort stack up? 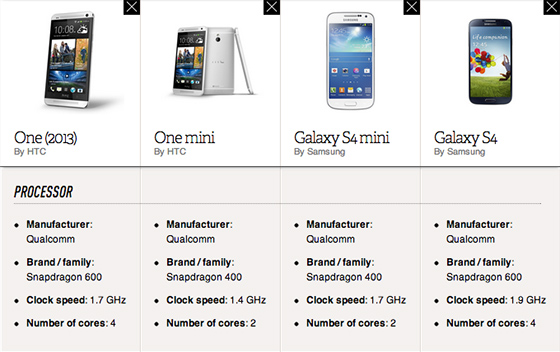 The Galaxy S4 mini features the same Snapdragon 400 processor as the HTC One mini, but Samsung's version has a higher clock speed. The S4 mini also more RAM (1.5GB vs. 1GB), a slightly larger battery, and a higher-resolution camera (8-megapixel vs. 4-megapixel). Megapixels aren't everything, though, and HTC claims its sensor's larger pixels perform better than those of a regular smartphone camera, so we'll have to hold judgement on that. One area that HTC has a clear advantage in is the display: the One mini has a 4.3-inch 720p display with 341 pixels-per-inch (ppi). The Galaxy S4 mini, on the other hand, only has a 4.3-inch qHD (960 x 540) display, which is far less dense at 256 ppi.

Of course, specs aren't everything. From our hands-on with the One mini, it seems like HTC has put the same care and attention into the phone's design as it did for the One. Fit and finish of both the Galaxy S4 and S4 mini have come under question — it's not that the phones are poorly put together, it's just their plasticky finish feels cheaper than the aluminum found in HTC's flagship. We'll have to wait to put the HTC One mini through its paces when the device launches in August, but for now, it looks as though HTC might be onto a winner.