How do you get from Los Angeles to San Francisco in 30 minutes?

Elon Musk has made his name on big ideas, whether it's space tourism or the electric car — but his latest project, mysteriously dubbed the Hyperloop, may be more revolutionary than anything he's done. It started with a simple promise: the ability to travel from Los Angeles to San Francisco in half an hour. As time went on, Musk added more. It would be low-friction, and use such minimal power that the entire thing could be run on electricity from solar panels installed above the tracks. It would use small pods, leaving "whenever you arrive" instead of cleaving to a schedule like an airliner. He's promised to unveil his alpha design for the project in just under a month's time, but already, observers are speculating on exactly how this next-generation transportation scheme would work.

The closest we've got is Japan's bullet train

The details Musk has already hinted at tell us a great deal about the project, and outline a number of the challenges he's likely to face. Based on simple math, we know it will have to travel an average of more than 600 mph. And it will have to do so almost frictionlessly, allowing for the low-power travel Musk envisions. It's a big promise, and one that would have major consequences for the transportation industry and for society at large. For the technically minded, it raises the obvious question: how in the world is this thing going to work?

So far, the closest we’ve got is Japan's superconducting maglev train — best known as the "bullet train." Its official top speed is 361mph, although it usually travels closer to 300 mph. Jim Powell, co-inventor of the bullet train and current director of Maglev 2000, thinks that’s as fast as open-air rail lines will ever go. "Air drag becomes too much of a problem after 300 mph, just from a power point of view," Powell says. "And then that air drag starts to generate noise. You wouldn’t want an airplane flying past your house at 600 mph." 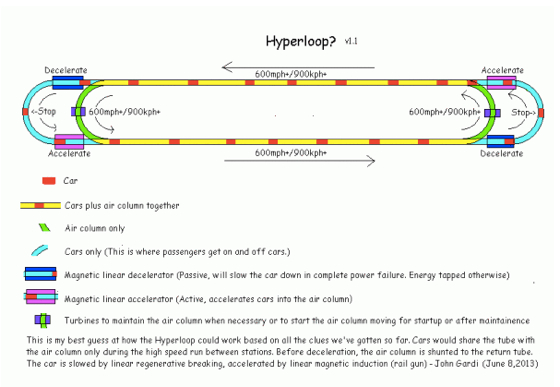 The Hyperloop would solve that by enclosing the craft in a tube, creating a hermetically sealed environment that a car could move through with as little friction as possible. But what’s inside the tube is still unclear. This diagram comes from self-described tinkerer John Gardi, and Musk has described it as "the best guess so far." It shows a column of accelerated air propelling cars through the Hyperloop, providing room on either end for acceleration or deceleration. But air drag is still a problem in Gardi’s model, and maintaining a steady breeze of 600 mph is harder than it might seem. "The air still has friction losses on the walls of the tube," says Powell. "It just doesn’t seem plausible." The friction would occur on the inside of the tube, rather than the outside of the train, but the same basic principle applies. For his part, Gardi says the issue can be addressed through testing, and the friction factors vary greatly when scaled.

The problem could be solved by sucking all the air out of the tube and leaving the cars to travel through a vacuum. "If you have a vacuum in a tube, then you have zero drag," says George Maise, fluid dynamics expert at Maglev 2000. "There's no limit on the speed, really." Musk is on record saying that the Hyperloop isn't a vacuum, but keeping a column of air traveling at nearly supersonic speeds would require a huge amount of energy to maintain — unlikely, for the kind of lightweight, solar-powered transport Musk has described. It's a puzzle, and one we're unlikely to have any firm answers for before August.

"If you have a vacuum in a tube, then you have zero drag. There's no limit on the speed, really."

Beyond what’s inside the tube, Musk also has to worry about where to build it. That means establishing right-of-way for a clear path between Los Angeles and San Francisco, the same problem civil engineers have to deal with when planning out a highway or a rail line. Thanks to the interstate highways, there’s lots of available right-of-way connecting the cities, but it’s much knottier than the straight line that Musk needs for the Hyperloop. Powell has tried out the same route for a possible "bullet train"-style maglev track, and says the the increased speed makes turns extremely difficult. At high speeds, even a gentle turn pulls passengers to the side. If the loop turns too sharply, the force will make passengers sick. Powell's research finds that passengers can withstand about a tenth of a G in lateral force before causing problems. At 600 mph, that gives the Hyperloop a turning radius of 40 miles. That’s an extremely straight line, and it means the project will likely have to travel through some populated areas.

"If somebody other than Musk had proposed this, I would say it's very suspect."

There are some models for how to build this kind of transport without upsetting the neighbors. One proposal comes from ET3, a Colorado-based group that's built a number of vacuum-based transportation prototypes. Their model stacks the tubes vertically on concrete pillars, just a couple meters across. The result looks more like power lines than a super-highway, and could have a similarly small right-of-way requirement. That makes Musk's straight shot seem a lot more plausible, especially if the height of the pillars varies to accommodate changes in elevation.

But even to the experts in the field, the answers are far from clear. "Other than what Musk has announced, I don't think anyone knows what his ideas are," says ET3 founder Daryl Oster. The promise of a half-hour trip across California is genuinely world-changing, and unlike most entrepreneurs, Musk has a track record that suggests he could make it happen. Still, what we know about the Hyperloop suggests a technology that's both magical and near-impossible. "If somebody other than Musk had proposed this, I would say it's very suspect," Maise says. "I really have no idea how you do this."

And: Get ready to rent your own research satellite