Android 4.3 detailed in new leak, but updates are minimal

Share All sharing options for: Android 4.3 detailed in new leak, but updates are minimal

Google is set to reveal the next version of Android at a press event next week, but we have already received a pretty good look at what the update will bring courtesy of a leaked copy obtained from a secondhand Nexus 4 sold by a Google employee. Android 4.3 Jelly Bean, as the name suggests, will be a minor update to the user experience introduced in 4.2. One of the most welcome changes comes to the dialer. With the update, the phone will automatically suggest phone numbers from your contacts as you dial either by matching the digits or using the T9 dial pad to look up names. It is worth noting that it's not on by default, however. The dialer now includes an option to add pauses when calling a number as well.

Android 4.3 also features the slightly updated camera application first introduced on the Google Play editions of the HTC One and Samsung Galaxy S4, and there are a few helpful new settings. One setting, when enabled, lets apps turn on Wi-Fi just to get a lock on your location before turning it back off again — meaning apps will no longer pester you to turn on wireless to get your coordinates. The updated operating system can now use Bluetooth Low Energy (BLE), which means you'll use less battery when connecting to compatible wearable devices, for instance, and there's for some new advanced visual effects in games and apps thanks to OpenGL for Embedded Systems 3.0. In all, it looks like there won't be much to see with 4.3, but AndroidCentral has published a helpful video walkthrough demonstrating some of these changes. There could still be some major behind-the-scenes improvements to the core of the operating system, however, and we'll see next week if Google has made any progress there.

Update: A tipster has reached out to us claiming to have Android 4.3 on his Nexus 7 tablet. There are even fewer differences between Android 4.2 and 4.3 on a tablet, since the Nexus 7 doesn't have a dialer or camera app, but hopefully we'll learn more about the updated OS at Google's event next week. Check out an image of the system information screen below. 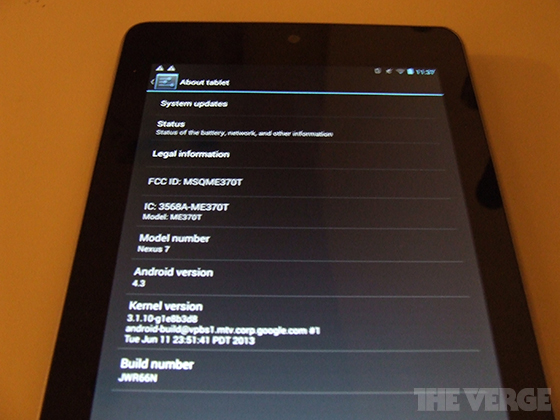