AMD might be on the road to recovery as losses narrow

AMD might be on the road to recovery as losses narrow

AMD was in deep trouble, but the chipmaker appears to be clawing its way out of the hole. The company reported its Q2 2013 earnings today, and it's losing quite a bit less money than it did in previous quarters. While AMD lost a tremendous $473 million in Q4 2012, the company's losses narrowed to $98 million in Q1 2013, and today the company reported an operating loss of just $29 million on $1.16 billion in revenue. 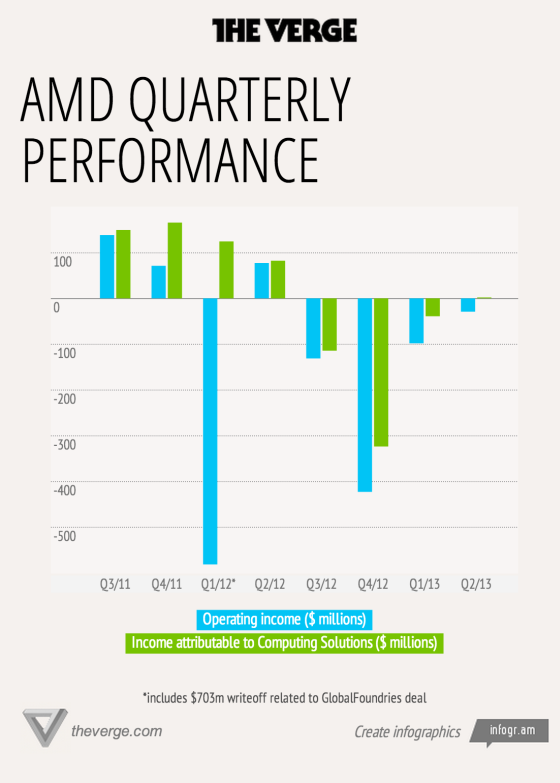 In fact, the company's troubled processor business actually had positive income for the first time in a year. Computing Solutions reported an extremely modest operating income of $2 million — preferable to the $39 million it lost last quarter. AMD says that higher notebook, desktop, and server shipments were responsible for the positive number. Meanwhile, the firm's graphics business broke even.

AMD was a contender

Eight years ago, AMD was a contender, a company whose processors arguably surpassed Intel in performance. It led the charge to 64-bit processing, to multi-core processing, and to combining the CPU and GPU onto a single hybrid chip. The former underdog bought graphics giant ATI, itself a formidable competitor for Nvidia, and put its intellectual property into game consoles like the Xbox 360 and the Nintendo Wii. Then it made some crucial mistakes, and things began to unravel.

While AMD isn't raking in significantly more money than previous quarters, it looks like it's on the road to recovery. The restructuring efforts it began last fall are definitely stemming the loss, reducing the amount that AMD's spending to get the same $1.16 billion in revenue that it got in Q4 2012, last holiday season. This holiday season, AMD's partners Nintendo, Microsoft, and Sony will all be selling new video game consoles with AMD chips inside, and the company should theoretically already be making money by then. "We expect a return to profitability in the third quarter," says AMD CEO Rory Read.

"We expect a return to profitability in the third quarter."

After profitability, the company's goal is to move up to half of its entire business to embedded and "semi-custom" designs — chips based on the building blocks of its existing technology, but designed for specific situations, like the custom APUs in the Xbox One and PlayStation 4 game systems. Some of those chips might include ARM components. And AMD, like Intel, says we should also expect many more cheap PCs (in AMD's case, priced from $300–$600, with touchscreen notebooks starting at $400) in the near future.