At Comic-Con, a 20th anniversary inspires nostalgia and thoughts of the future

It sounds like the cast and crew of The X-Files are itching to make that third movie. Creator Chris Carter, stars David Duchovny and Gillian Anderson, and seven of the show's writers reunited today for a panel at Comic-Con to celebrate the paranormal series' 20th anniversary in front of a massive audience of fans. The discussion ranged from the possibility of a new movie, to why Duchovny and Anderson never worked together again (Duchovny feels their X-Files relationship is too special), to Mulder and Scully's lost sex tape (a joke, we think).

There were no shortage of fans wearing T-shirts from 2008's The X-Files: I Want to Believe in the audience. It doesn't sound like a new movie is in the works just yet, but everyone on the panel was on board. Duchovny said he assumed they'd keep making movies. Anderson said she'd like to do a movie. Of course, they both said the same thing last year.

Carter said that while X-Files went through a period after September 11 in which it was not relevant because people wanted to trust the government, it is now very relevant today — an allusion to the creepiness of the National Security Agency's recent actions. 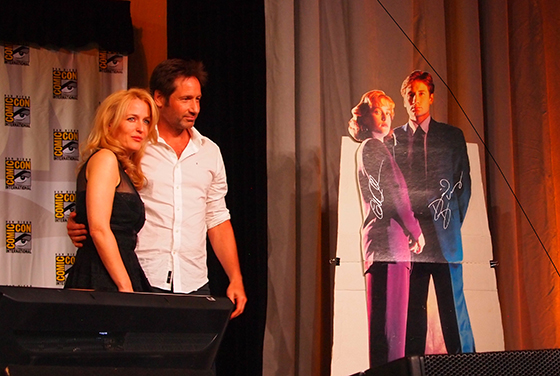 The cast and crew all seemed very happy to be back together, joking among themselves, reminiscing about their favorite show moments, and shouting "it's been 20 years, for God's sake!" every time someone had trouble remembering a detail. At one point, writer John Shiban's young son Jerry, who played Scully's son as a baby, walked out on stage and waved. "He looks like me," Anderson joked.

Vince Gilligan, creator of Breaking Bad, recalled when he met Brian Cranston, who guest-starred on season six of The X-Files as Patrick Crump (named after Gilligan's brother Patrick and a high school teacher, Mr. Crump). Crump, well, breaks bad after his wife's head exploded due to electromagnetic experiments at a nearby military facility. "That was very fruitful for me, personally, meeting Brian Cranston through The X-Files," Gilligan said. "There would be no Breaking Bad without X-Files."

Some pieces of trivia filtered out of the panel as well. Carter once gave writer Darin Morgan a figurine of the terrifying creature from the episode "Humbug," which Morgan now uses as a dish for Halloween candy. Shiban told a story about the origins of the "butt genie" from "Badlaa," which was originally pitched as a tiny Indian who crawls into a boy's body and controls his mind. "That was the pitch. And Chris heard the pitch and was thoughtful about it," Siban recalled. "And then he said, 'it would be scarier if it went in his ass.'"

The fans seemed pleased, although mindful of the fact that it has been five years since the last X-Files movie. The moderator, Mike Schneider of TV Guide, asked about the hypothetical X-Files 3 one last time at the end of the panel.

"I have to say, just being here today and seeing all of these people—" Carter said, trailing off. "You need to get excited about going on and doing it again, because it's a hard road. But actually—"

Here he was drowned out by audience applause.

"What were you going to say?" Schneider asked.

"I wasn't going to say anything," Carter said, quickly.