These plans aren't a rip-off anymore, but they're not for everyone

Editor's Note: Since we first compared each of the early upgrade plans, carriers have significantly changed how they work. Verizon recently overhauled its Edge program with its new "More Everything" plans, and Sprint has replaced its One Up upgrade plan with an option in its "Framily" plans. T-Mobile has also announced a small change to Jump. We updated this post on February 14th, 2014 to bring the prices of all four carriers' plans up to date.

Over the course of just a few months in 2013, all four of the largest carriers in the US introduced completely new plans to go alongside traditional contract agreements and prepaid services. With T-Mobile Jump, AT&T Next, Verizon Edge, and Sprint Easy Pay annual upgrades, each carrier is going after the same thing: subscribers who want to get the newest smartphone as quickly as possible. That’s not the only thing that brings these new plans together, however. They’re all extremely complicated. And make no mistake, carriers like it that way — it’s easier to overcharge if customers don’t know it’s happening. So let’s untangle the secrets behind these plans to see which (if any) are a good deal.

These plans are complicated for a reason

All of these early upgrade plans work generally the same way. The carriers are essentially offering an interest-free financing plan to split up the full cost of the phone ($650 in the case of the iPhone 5S and most other top-tier smartphones). On top of the monthly service fees for data, a separate monthly charge levied by each carrier over a 20- to 24-month period makes up the full price of the phone. Sprint and T-Mobile also charge a down-payment, depending on current promotions, to help cut into the cost of a new phone. In addition, T-Mobile charges a $10-per-month fee to join Jump and get in on the device insurance included with the plan, which covers accidentally damaged, lost, and stolen phones. (If you’re not a Jump customer, this insurance usually costs $8 per month on its own.) No matter the carrier, when you want to upgrade, you trade in your phone — wiping out any remaining balance that you owed on the device in the process. Then the cycle starts over again.

Each plan has its own unique quirks, but the best way to analyze them is to take a real-world example. For the charts below, we’re looking at what you'd expect to pay for a 16GB iPhone 5S on each of these carriers using one of their new plans. In this article, we’re looking at both how much you’ll spend if you upgrade your phone once a year and how much it’ll cost if you upgrade every six months. 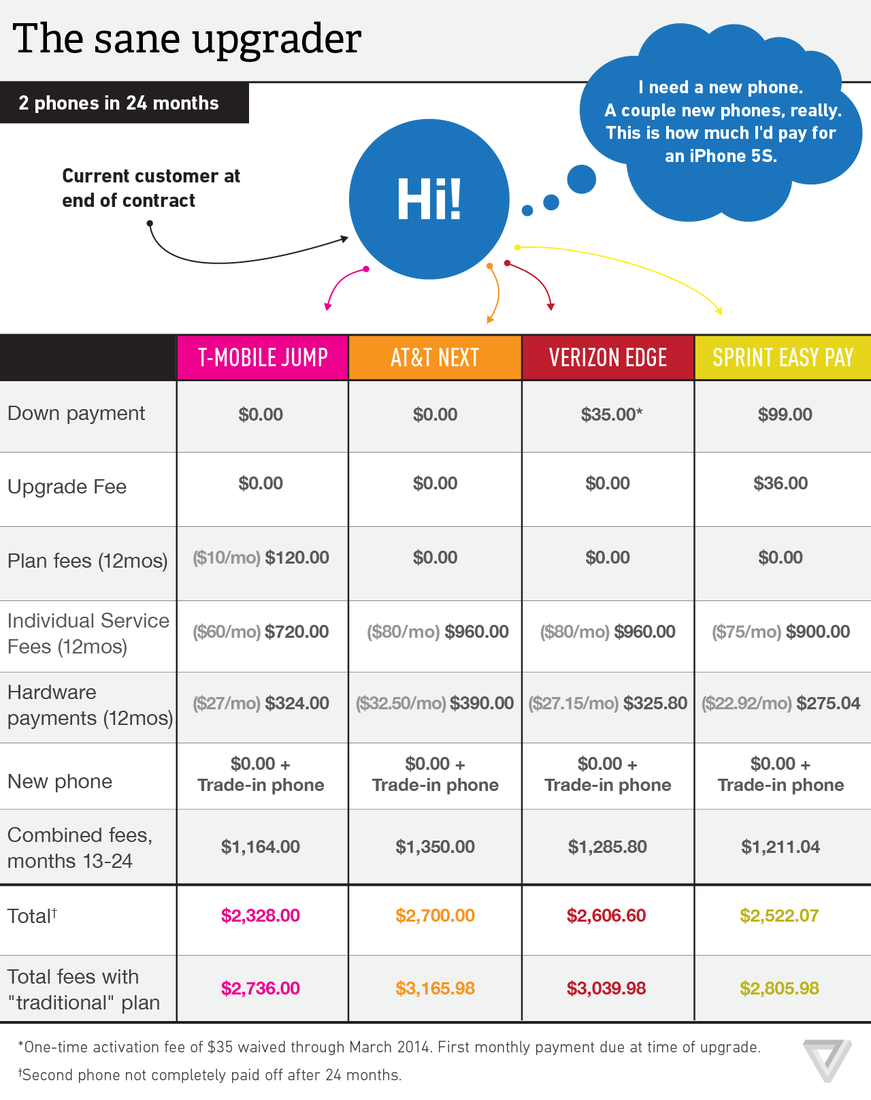 With all of these plans, the longer you wait to upgrade, the worse the deal gets, because you’ll be responsible for a larger portion of the cost of the phone. This means you can actually save a lot of money on Verizon and T-Mobile if you upgrade your phone every six months. Compared to signing up for a traditional two-year contract and then paying full price for a new phone every six months after, you can save about $1,300 on Verizon and roughly $1,200 on T-Mobile if you plan on buying four smartphones over 24 months. (AT&T and Sprint’s early upgrade plans don’t offer new devices six months in — you have to wait at least a year to upgrade). 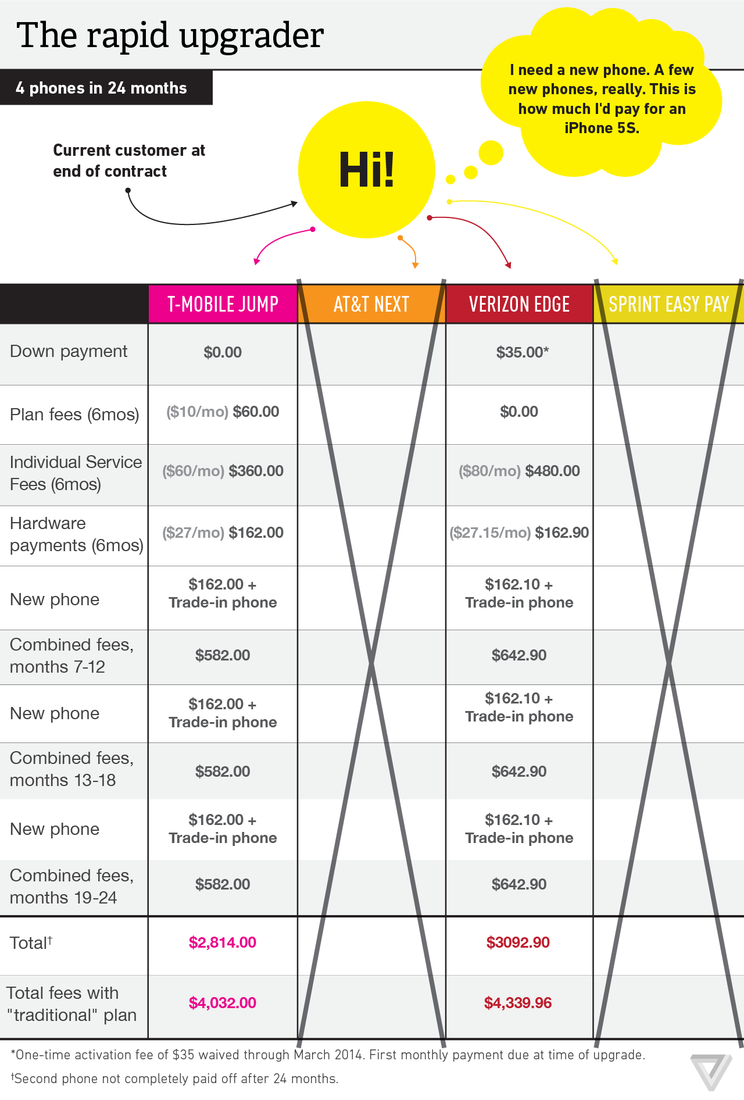 However, we think most people who’ll be using these plans will be upgrading about once a year — new phones just don’t come out that frequently. When you wait 12 months to upgrade, you’ll save about $400 on T-Mobile using Jump compared to buying each new phone at full cost on a traditional plan. With AT&T, you’ll save close to $470. On Verizon you’ll be saving about $430. On Sprint, you’ll save less than $300.

Those savings sound good, but the problem is that they are essentially canceled out when you consider that you’ll have to trade in your phone when you upgrade with one of these new plans. With a traditional contract you would keep every phone you purchase — and a one-year-old smartphone should be worth $300 at the very least on eBay or Craigslist. And you’re still on the line for about $300 more in device charges over two years with these early upgrade plans. So you can’t take the savings above at face value. Sure, you may be paying AT&T $470 less over two years if you using Next to upgrade once per year, but you won’t have two valuable smartphones to sell because the carrier takes the devices back. Considering a resale value of $300 per phone, Next would cost you $130 more in the long run.

That’s not at all to say that these plans are a rip-off. AT&T and Verizon have significantly overhauled their early upgrade programs in recent months, and the changes have addressed our main complaints. The two carriers used to effectively charge their customers for their phones twice, since they charged Next and Edge customers the same monthly service rate as customers who purchased their phones on contract. (For a more detailed explanation of how the two biggest carriers in the US ripped off their customers, see this article.) But AT&T and Verizon are now discounting their service plans for those who use Next or Edge, making them much fairer.

It’s also worth mentioning that you could potentially pay quite a bit less than the prices quoted in this article. With recent plan changes, AT&T and Verizon are incentivizing large data plans. If you get a 10GB bucket ($100 per month on both carriers) for yourself or your family, adding a smartphone only costs $15 on AT&T and $20 on Verizon if you’re using one of their early upgrade plans. With smaller buckets, like the 2GB plans we used in this article, adding a smartphone costs $10 more per month on both carriers. If you have several devices or family members, those savings could really add up. Sprint also has appealing discounts for large groups on its "Framily" plans. If you get seven friends or family members on the same plan, you’ll pay just $25 per line instead of the $55 per line charged for an individual plan (not counting the $20 extra charge for unlimited data and annual Easy Pay upgrades).

Early upgrade plans are no longer the rip-off they used to be, but that doesn't mean they're right for everyone

T-Mobile Jump still appears to be the best of the lot, however. Like the other plans, the savings over a traditional plan are minimal if you’re getting one phone per year, but the plan includes handset insurance that typically goes for $8 per month. It covers accidental damage, loss, and stolen devices, though there is a deductible. Thanks to a just-announced change, the plan isn't as good of a deal as it used to be for those looking to upgrade twice a year. But if you value having insurance on your phone, Jump might be a good idea.

The bottom line, then? If you’re going to upgrade your phone twice a year, every year, you could save a lot of money using T-Mobile Jump or Verizon Edge. But buying new phones at that clip is an expensive hobby and new top-tier devices don’t even come out that often. With the more likely scenario — one phone per year — you stand to save little to nothing by opting for any of these carriers’ new upgrade plans when you consider the resale value of your old phone. And if you don’t upgrade every 12 months you’ll be racking up extra charges for no reason. But if you would rather not be bothered with trying to sell your old phone, these early upgrade plans might make sense for you.

Note: Calculations above map out the costs an individual would pay if his current contract were complete and he signed up for the early upgrade plan offered by his carrier when buying an iPhone 5S. We show how much it would cost to upgrade your phone once per year for two years as well as the cost of upgrading once every six months for two years. The cost of each phone after the first iPhone 5S was calculated using the same price that the 5S costs today. Prices change often and can differ by region or your credit score. Taxes aren't included in these calculations.

To see if you really are better off signing up for these new plans, we compare the cost of using one of these early upgrade plans with buying a new phone before your traditional two-year contract ends. This "traditional" method entails signing up for a new two year contract and buying a subsidized iPhone 5S for $199.99. After a year, you then pay full retail price to get a new device ($649.99 for iPhones). This method is a bit different for T-Mobile, which no longer uses two-year contracts.