Zune 2.0: is Microsoft making the same mistakes with Surface RT?

History is in danger of repeating itself

Share All sharing options for: Zune 2.0: is Microsoft making the same mistakes with Surface RT?

Back in June of last year, Microsoft started teasing a "major announcement" that would soon be revealed as its first tablet: the Surface RT. There was an air of excitement, and the expectation that Microsoft might be able to tackle the iPad head-on with a slim and lightweight device that took advantage of a keyboard accessory. Fast-forward 12 months, and Microsoft is cutting the price of its Surface RT tablet by 30 percent worldwide because it's simply not selling. It’s also taking a $900 million hit related to the stock it has left over. For a company that has struggled, with the exception of Xbox, to generate consumer interest in hardware products like Zune and Kin, was Surface RT always doomed? Is Microsoft's iPad competitor quickly becoming another Zune?

A key part of Microsoft's previous hardware failures has been in the lack of a clear message to consumers. The Zune was designed to take on Apple's iPod, but it ended up becoming the brunt of many jokes. Microsoft limited its distribution to the US, and it never committed fully to the product. The marketing for Zune was also very obscure, and often confusing. If you'd never heard of Zune, then an ad featuring kangaroos jumping around and jellyfish didn’t really help you understand what it was. Microsoft is repeating the same mistakes with the Surface RT.

What does RT even mean?

The initial name for the Surface RT, as Microsoft now refers to it, was Surface with Windows RT. Not only did Microsoft face the challenge of explaining what this new device was, but they got tangled up trying to mash up a new touch device with a desktop mode that could only run its key legacy app suite: Office. As is so often the case, Microsoft was hobbled by its inability to make a clean break with its cash cow, Windows.

Faced with these challenges, the initial marketing for Surface RT was perplexing. A series of street-art ads appeared in several US cities ahead of the launch, but the company refused to talk about pricing or availability. It was a clear effort to generate hype, but there was mixed opinion over Microsoft's TV ads. "The first round were a little bit polarizing," admits Surface general manager Brian Hall in an interview with The Verge. "People were really excited about Surface, they thought they were great ads … at the same time, a lot of people, and Surface fans, wanted them to carry more weight on why Surface is great at a feature level."

Instead of explaining the benefits of a Surface tablet or airing its hard-hitting introductory ad, Microsoft chose a Glee-like commercial with dancing school girls. It focused on the "click in" aspect by demonstrating the Touch Cover the company had built to accompany the Surface. The cover was, and still is, an optional accessory at retailers, and yet practically all of Microsoft's advertising includes it. A lack of a bundled Touch Cover also underlined a big challenge Microsoft faced: price. The software giant didn't undercut Apple's iPad pricing, instead it matched it. That wasn’t good enough, as Apple's iPad had brand recognition, a high-res "Retina" display, and over 300,000 apps. 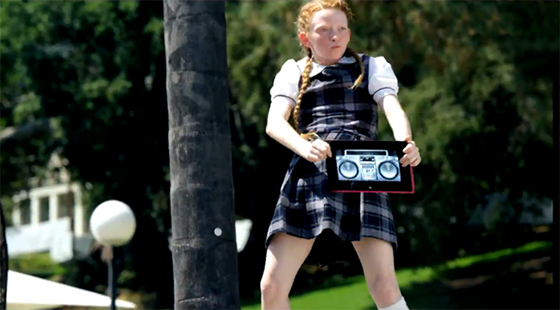 In practice the Surface RT is a tablet with good battery life, and a keyboard for when you need to do some writing or work on the go. It's not a laptop, but more of a tablet with a bonus feature. Initial reviews praised the hardware of the Surface RT, but the software held it back. Windows RT, the ARM-based version of Windows 8, was sluggish on Microsoft’s first tablet, and key apps like Music and Mail lacked the features you'd expect from a modern tablet. Microsoft has improved things greatly in monthly updates ever since, but a small number of apps and the lack of a solid software to match the hardware didn't help.

Despite this, Microsoft thinks it’s ready to take on the iPad once again. "Because iPad has such a strong awareness and understanding in the tablet market, it's important for us to start to compare more with iPad," says Hall. Microsoft is launching a new ad, similar to its recent Windows 8 spot, that directly compares Surface RT and iPad. After a 30 percent price cut, Microsoft now has the upper hand on pricing, and it's also explaining the differences between the two. After a $900 million hit due to Surface RT stock in its latest quarter, it's clear Microsoft has millions of these tablets it still needs to sell.

Microsoft isn’t throwing in the towel, but this idea of a "productive tablet" is one that seems frustrating for it to try and explain. "If everybody just looks at the market through the lens of an iPad, that obviously is a tougher position for us," explains Hall. "For us we need more people using Surfaces, so that they can explain the benefits." Part of the problem for Zune was the limited availability and distribution. Microsoft faced the same issue at the launch of the Surface RT, limiting the tablet to online sales only or through the company’s small number of retail stores in the US. It rectified that after a number of months, and it’s still broadening distribution internationally, but the initial buzz was sidelined by consumers not knowing where they could try or buy the Surface.

It’s obvious Microsoft has made some mistakes here. The numbers speak for themselves. Overestimations on hardware, a strange marketing campaign, and a lack of retail presence are all part of that. You can’t help but feel the company knew it needed to be aggressive, and that it was — and still is — playing a tricky balancing game with third-party manufacturers in an effort not to damage its Windows 8 prospects. Microsoft seemed to be serious with the Surface RT in some respects, but it certainly held back initially.

It's time to focus on what Surface is

Thanks to a full version of Windows 8, the Surface Pro is a less confusing way forward for Microsoft under the Surface brand. It supports the millions of apps that are still in use today on the desktop, it’s fast, and it opens up the idea of touch when you need it. Windows 8 is a hybrid OS, and that’s not a bad thing. But no single manufacturer has successfully combined a full PC with the form factor of a tablet and made it work in all modes, even though it’s the dream right now.

Microsoft needs to focus on Surface Pro and tune it until its "Metro-style" apps are truly ready for productivity and play. The company wasted years on Zune, and never really got it right. Microsoft’s idea of a hybrid tablet for work and play could be a hit, but right now it’s making the same mistakes of old and struggling to convince consumers it’s the next big thing. If it’s really devices and services Microsoft wants, then it needs to look closely at its mistakes before Surface turns into Zune 2.0.