A first look at Apple's iWork for iCloud beta

Share All sharing options for: A first look at Apple's iWork for iCloud beta

Apple is starting to roll out a public beta of iWork for iCloud, its upcoming online office suite, and it's inviting select users to test out the new apps through an emailed invitation. The suite includes web editions of Pages, Numbers, and Keynote — Apple's take on word processing, spreadsheets, and presentations — and serves as a clear way for Apple to challenge the productivity giants: Microsoft Office and Google Docs. The new web apps will let users create and edit documents, sync between apps, and access their files from anywhere.

Pages, Numbers, and Keynote are all fairly powerful translations of their desktop counterparts. Like Office Web Apps, iWork for iCloud offers a lot more image manipulation and editing options than Google Docs. You can smoothly drag around images and objects, and even apply rich effects like drop shadows and reflections. The apps give a lot of control over them too, even down to changing the angle and opacity of a shadow. It's probably more nuanced control than you'd ever really want, but it manages to be easy to use without become a cluttered distraction. 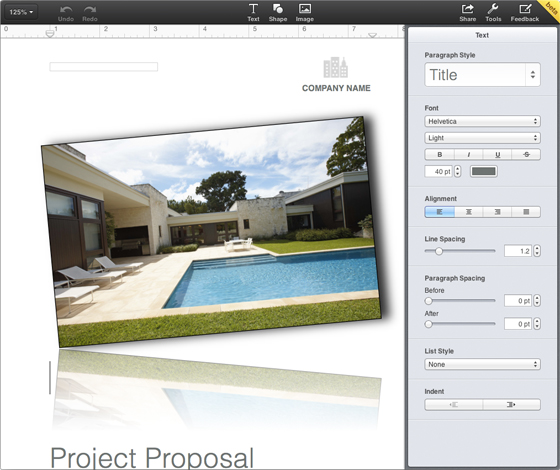 Those editing features and visual flares throughout iWork make it more powerful than Google Docs in a lot of ways, but it falls behind when it comes to collaborative editing. Right now, iWork is able to sync your documents live between browsers and apps. It's a neat trick, but not very helpful since they all have to be logged into the same account, and you're probably only going to be editing on one device at a time. Since there's no way to easily share documents and receive feedback, iWork just won't be an option for a lot of users.

Apple needs collaborative editing tools to take on the competition

There's a number of other notable omissions in the beta as well — including some basics like version tracking and being able to print your documents — but Apple notes that those features are on the way. What it hasn't mentioned is whether or not collaborative editing tools are on the roadmap for iWork, but they'll need to be if it really wants to compete. Neither Google nor Microsoft have nailed it on both the cloud and on the desktop yet: Google Docs has limited editing options and its offline mode can be finicky, and Office Web Apps is most useful when it's paired with the pricey desktop Office suite. Apple isn't there yet either, but it's off to a good start.

Update: an earlier version of this article noted that the iWork beta performed poorly in Chrome — while this is true of the current Chrome beta, it appears to run smoothly in Chrome 28, the browser's latest complete release.