The top-tier panels at Comic-Con are usually dedicated to upcoming blockbusters or fan favorites — yesterday, thousands of people packed into the giant Hall H to see Harrison Ford or the cast of Dexter. Between these panels, though, we also got a chance to see three slightly more low-profile directors talk about their craft: Hot Fuzz and The World's End's Edgar Wright, Children of Men director Alfonso Cuarón, and Marc Webb, responsible for both the latest Spider-Man reboot and 500 Days of Summer. In some ways, Webb, Wright, and Cuarón couldn't be more different. But their current projects all have the basic elements of a Comic-Con movie — alien invasions, astronauts stranded in space, superheroes. They also share a common fear: that as editing techniques get more sophisticated, filmmakers are missing a chance to provoke real, visceral awe.

Webb's Amazing Spider-Man and Cuarón's upcoming film Gravity both rely heavily on cinematic sleight of hand. Gravity sat unproduced for years, partly because the technology to shoot long scenes set in zero gravity simply didn't exist. The "Vomit Comet" plane used for films like Apollo 13 was too small for the sets, and shots couldn’t be longer than 20 seconds. Finally, Cuarón hit on the idea of a set that would rotate around a stationary actor, making it look like Sandra Bullock or George Clooney was floating. Webb, meanwhile, had to balance the anything-goes world of CG animation with the realities of physics. "A human body can only take so much," he said. "Flying through the air at the speeds that Spider-Man would fly through the air is kind of mind-boggling and impossible."

"Audiences now are very aware of how films are made."

But Webb in particular seemed ambivalent about the effects in his film. While he considered the CG in The Amazing Spider-Man necessary, he also praised films that let an audience watch "people doing extraordinary things." Outside the fun of being impressed by a movie's action or set pieces, "there's another tangible kind of pleasure people get from watching extraordinary physical feats and stunts," he said. And viewers, more than ever, are conscious of the difference. "Audiences now are very aware of how films are made, and how with quick cutting it's obviously not someone doing [their own stunt]," said Wright. "You even have faces replaced now."

One of Wright's goals in World's End was to take the film's early naturalism into its later over-the-top devastation, and fight scenes became the nexus of this effort. "What we wanted to do was do them without cutting, so you would believe that the actors were doing it — because they were doing it," he said. For the film's leading men, that meant learning to fight or vault a table; for the stuntmen, it meant becoming actors, not just doubles. And for the crew, it meant long shots that left no doubt who was on camera. "If you look at a ‘70s James Bond film, the camera will quickly go behind Roger Moore's shoulder, and it's no longer Roger Moore," said Wright. 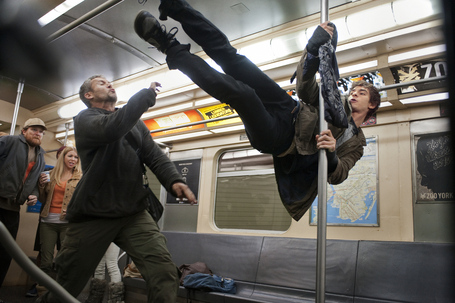 The talk’s moderator suggested that the medium has become a victim of its own success. Filmmaking is more accessible than ever, as are digital effects, but as a result, there's a feeling that "we can't believe our eyes any more." Modern audiences, said Wright, "know how things get put together." But there's also, the directors believe, a more unconscious recognition that quick cuts are creating something artificial. Webb spoke lovingly of Children of Men's famous car scene, shot in a single long take. "People have a sense of real time," said Cuarón. "Whenever you cut, even when you're not conscious of the cut, in the back of your mind, you know that time has been manipulated."

"If we don't make original films, there'll be nothing to remake in 30 years' time."

Like luminary directors Steven Spielberg and George Lucas, the panelists expressed frustration with the current state of movie theaters, where only "franchises and sequels" get shown. "Multiplex cinemas ... are almost exclusively for big movies," said Cuarón. "Until 10 years ago, you could find very small movies — it was probably the last generation of films when they were still released in multiplexes." They echoed the common wisdom that good filmmakers will head to TV or other venues, and that the low bar to actually creating something means "there's no excuse not to make a film," no matter where it ends up being seen.

But Wright threw in a final, pragmatic plea for big distributors to put risky projects in the public eye. "If we don't make original films," he warned, "there'll be nothing to remake in 30 years' time." Webb, whose own take on Spider-Man was released a half-decade after Sam Raimi’s trilogy ended, jumped in: "Or five years’ time!"