Huawei has been shifting gears lately in hopes of having its hardware make a serious dent in the market. It recently revealed two new devices that — by name — are seemingly meant to take the young and fashionable by storm. That's probably a bit of a stretch, but the MediaPad 7 Youth and the MediaPad 7 Vogue are still fairly sleek 7-inch tablets that the company hopes will meet a certain niche: they're cellphones too, and they'll likely come in at a lower-end price.

Though Huawei is still keeping the wraps on a number of details for both MediaPads — including whether they'll ever head to the US — we're interested to see how they stack up. The tablets closely resemble the Asus Fonepad, another 7-inch tablet with calling capabilities; while on the higher end, Sony's Xperia Z Ultra serves as another way to tackle the same market, by going with a smaller 6.4-inch display. We're putting the devices side by side to see how Huawei's latest compare. 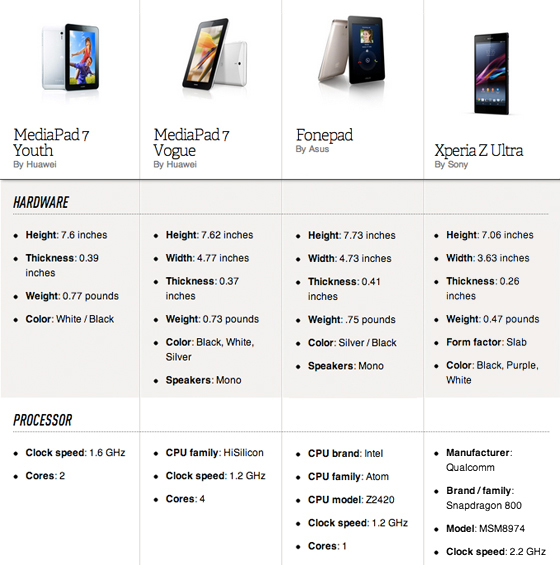 Among the major unknowns is the price of Huawei’s two new MediaPads. The tablet line’s previous incarnation, the MediaPad 7 Lite, went for around $299 at launch, according to AndroidPolice. The two new devices don’t appear to stray wildly from the last, which should put them at a similar price point. That’s still on the expensive side for a lower-end Android tablet, but the price makes a bit more sense when you add in the full cellular capabilities.

Both of Huawei’s tablets have aluminum bodies that come in at just under .4-inches thick. That can’t quite stand up to the slim, quarter-inch thickness of the Z Ultra, but the Ultra is also intended to be a more premium device, coming in at £639.99 — about $975. For their displays, the Fonepad has a 1280 x 800 resolution, while the MediaPad 7 Vogue comes in at 1024 x 600 — both are on the lower side, but they actually have a higher pixel density than Apple’s iPad mini. Of course, next to the Ultra, neither can quite stand up: Sony's phone has a full 1080p resolution in an even smaller display.

Neither of the MediaPads are likely to run nearly as snappy as the Z Ultra either, falling behind on both clock speed and RAM. However, it's possible that the pair will end up running quicker than Asus' tablet. On paper, both MediaPads have beefier processors than the Fonepad — but the Fonepad is running on one of Intel's Atom chips, which is likely to perform a bit better in general than Huawei’s own CPUs. But if the MediaPads can hold up, they should be able handle casual use just fine.

Huawei is keeping to a niche market

Huawei skimps a little bit elsewhere on the tablets: the Vogue has a fixed focus rear camera, a VGA resolution front camera, and only 8GB of internal storage — though that’s expandable by microSD. Both tablets are also running on Android 4.1, which is soon to be even more outdated. Huawei’s devices can’t compete with the Z Ultra, but they aren't exactly meant to. Instead, Huawei is distinctly aiming for a fairly specific niche. Its new tablets can compete with the likes of hybrid, budget devices like the Fonepad — but that’s probably not about to help the company break into the mainstream exactly like it wants to.

Here's a few other notable additions to the database this week:

If you want to learn more about any of the products mentioned above, all of our information on them can be found through the database box located beneath the article. For more on cellphones, tablets, and just about every product around, you can check out the full Verge Database right here.