Man bites dog: a new rabies antidote could save 55,000 lives per year

Share All sharing options for: Man bites dog: a new rabies antidote could save 55,000 lives per year

When someone is bitten by a rabid animal in the US, it still makes the news. Maybe not national news, but incidents of people being bitten by bats and dogs and raccoons — even if no one dies — still merit local headlines. And the prospect of rabies is enough to send Americans into fits of worry. A recent story out of New Bedford, MA, for instance, describes a man beating a suspected rabid fox to death with a stick after it bit one of his neighbors.

Rabies only kills about three people every year in the US, but as many as 55,000 die every year in the rest of the world — with 50,000 of those deaths occurring in Africa and Asia. Why? In part, it’s because those living in rural areas often have little-to-no access to healthcare. But it's also because rabies treatments are prohibitively expensive in Africa and Asia.

"Poor people are at a higher risk," reads a statement from the World Health Organization (WHO). The average cost of post-exposure treatment in Africa runs around $40, and in Asia it's $49. Given that "the average daily income [in these countries] is $1-$2," the WHO notes, that expense can be nearly impossible for families to cover. 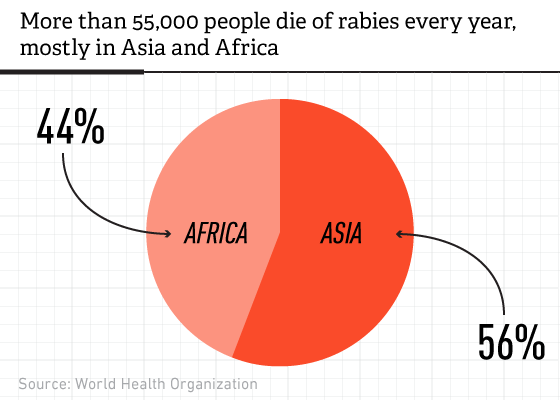 Those challenges help explain why rabies continues to kill so many in Africa and Asia, despite the existence of a treatment that’s extremely effective when administered soon after a bite. It’s a problem in desperate need of a solution — and researchers in the US now believe they’ve come up with it.

"Poor people are at higher risk."

A novel rabies antidote, developed by a team at the Centers for Disease Control and Prevention (CDC) and the University of Massachusetts, is wrapping up clinical trials on humans in India at the moment. In a recent patent application, it’s explained that treating human rabies involves two basic procedures: first, the injection of an anti-rabies serum soon after the bite; then, the "administration of multiple doses of rabies vaccine, usually over several days and weeks."

When someone gets bitten by a rabid animal in the US today, that person will — in the best-case scenario — go through a five-shot regimen that takes about a month to administer properly. This regimen is known as post-exposure prophylaxis (or PEP). What happens is this: after properly cleansing the bite wound, a doctor or medical professional will immediately inject the wound with an anti-rabies serum immunoglobulin. Somewhere else on the body (typically in the shoulder muscle), a rabies vaccine is administered. Three days later, the the second rabies vaccine shot will be administered, followed by shots on days 7 and 14 after the initial bite for a total of four shots. That's in the US. For the rest of the world, another shot is given on day 28.

The vaccine itself isn’t particularly expensive, or difficult to make, says Deborah Molrine, deputy director for clinical affairs at UMass. Even without the serum, the vaccine is enough to save hundreds of thousands of lives. But consistent use of the serum, particularly in developing countries, could bring that number even higher. (Molrine emphasizes, though, that the best course of action is to have both the immunoglobulin and the vaccine administered.) 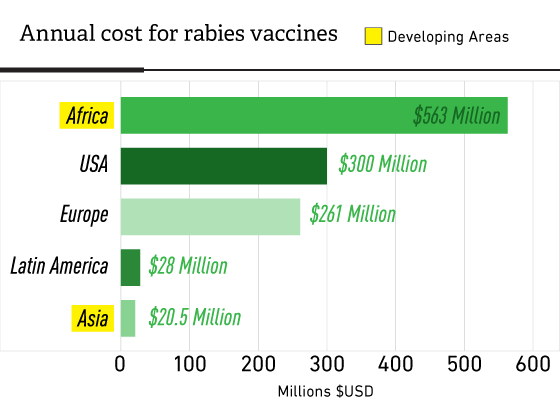 Unfortunately, the serum is problematic. It’s complicated to make, for one thing. On top of that, as the patent application explains, few manufacturers are in the business of making anti-rabies serum. As a result, it "remain[s] relatively expensive, especially in the developing world where [it is] most desperately needed."

The solution — at least according to the research team behind this new project — involves making the serum much simpler.

Unfortunately, the serum is problematic

Today’s rabies serum is what’s called a polyclonal antibody. To make a polyclonal antibody for humans, a human needs to be inoculated against rabies. That inoculation will catalyze the natural production of rabies-specific immunoglobulins from B-lymphocytes that can then be extracted and purified into a serum. Making polyclonal antibody serums isn't ludicrously expensive — about $250 per patient, according to the WHO — but they become very expensive in time because they need to be constantly reproduced by methods such as inoculation.

The research team, in contrast, seeks to make an antibody that’s less expensive overall. They’ll do it by deriving a rabies serum from an antibody that’s monoclonal rather than polyclonal. Monoclonal antibodies can be equally expensive — if not more expensive — to initially make, but monoclonals can be produced in a lab in massive quantities. So economics of scale make it cheaper as more monoclonals are used on more people. The serum can, in other words, be "made efficiently, in virtually unlimited amounts, in highly purified form" — without the purification steps and long processes necessary with polyclonal antibodies. 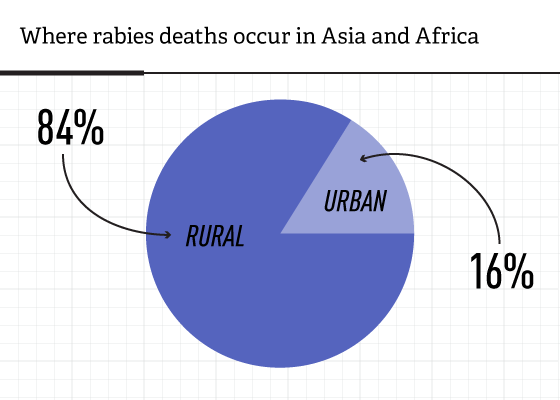 Which means that instead of waiting for expensive serums, medics in developing countries may be able to get a rabies serum that’s easier to make, and overall much less expensive.

This is a relatively new way to treat rabies

Submitted patents are, of course, pending until they’re approved by the US Patent and Trademark Office. And this is a relatively new way to treat rabies. The first test of a monoclonal antibody on a human being was only made public in a 2008 study. But the anti-rabies human monoclonal antibody treatment is far along in the testing process; it’s being tested on humans in clinical trials right now in India. This is one of the last testing stages before medical products are cleared for approval by a regulatory agency for patient use.

Dr. Molrine is hopeful about the monoclonal antibody’s prospects. "This could change a lot in these developing countries," she says. "This could save lives."