It's about 11:30AM on Friday at Comic-Con 2013, and there is about to be a changeover. The first two hours inside the Bayfront Hilton's massive Indigo Ballroom have been dedicated to Cartoon Network shows, while the next four hours will be devoted to its alter-ego, Adult Swim. Parents and children pour out of the room as a switchback line of mostly college-aged fans wait to fill the 2,600 seats.

It's like the channel itself, which morphs every night at 9PM, werewolf-like, from kid-friendly 'toons to mature, bizarre, often comically violent shows. A huge range of offbeat programming has passed through Adult Swim over the 12 years it's been in existence, from anime to the ultra-relevant Loiter Squad with rap collective Odd Future. The current lineup includes The Eric Andre Show (a weirder The Tom Green Show), China, IL (originally a web series about a college run by lunatic faculty), and the longest-running Adult Swim show, Aqua Teen Hunger Force (the mundane adventures of a milkshake, a wad of meat, and an order of fries).

There are only two essential elements of an Adult Swim show: weird, and low-budget. "We make our own T-shirts," Venture Bros. co-creator Doc Hammer admitted on stage during Comic-Con. "The Venture Bros. empire is a lie. I drive a moped." 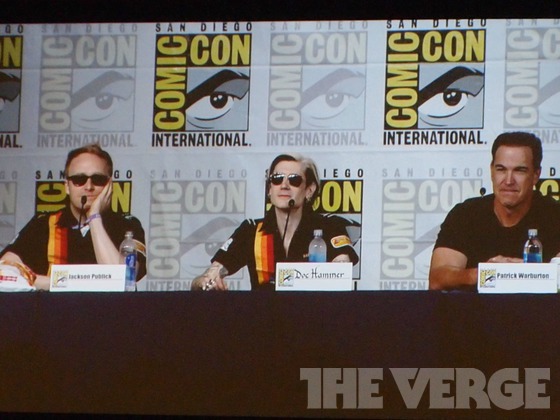 Even with established, long-running shows like Venture Bros. under its belt, Adult Swim continues to take risks. Derrick Beckles' Hot Package, done in the style of a retro, Canadian version of Entertainment Tonight, will premiere on Adult Swim sometime this year. One clip shown at Comic-Con starts with a clip from the 90s of a couple making out in a beach condo, then having sex framed by clip art of roses. The phone rings. We cut to a mashup of obscure, vintage scenes of people answering the phone: a man alone in an office, another man in a different office with a couple, and an Asian man who then cuts his own wrist off with a mezzaluna.

The show is being produced by Abso Lutely Productions, the house of Tim Heidecker and Eric Wareheim, of cult hit Tim and Eric Awesome Show, Great Job! It's not the weirdest thing to ever air on Adult Swim, but in the past, the network slipped new shows onto the channel late at night, often premiering them at 4AM with little to no introduction (cancellations were just as stealthy). But now, as the network books its highest ratings ever, the fly-by-night strategy is no longer enough.

In May, Adult Swim announced its lineup — which includes the new animated comedy series Rick and Morty from Community creator Dan Harmon and the animated-plus-live action series Mike Tyson Mysteries — with a splashy concert by Kanye West. The network is also doing a full court press at Comic-Con. In addition to hosting at least seven panels, Adult Swim has a 40-foot pink castle set up in the pop-up amusement park across the street from the convention center. On the show floor, fans were treated to chair massages in the Adult Swim Day Spa & Rest Stop. There's also an Adult Swim party and an Adult Swim costume contest.

All this pomp reflects how far Adult Swim has come. What started as a no-budget, unsupervised side project has blown up into a formidable cultural force for the 18-24 demographic. At first, Turner allowed Adult Swim to be as weird as it wanted because no one was watching; now it's allowed to be weird because it's making money. Adult Swim technically spun off from Cartoon Network in 2005 because its demographics were so different, representing a key bloc of totally new viewers. It has now found its way into 99 million households.

Space Ghost: Coast to Coast was a cult hit on late night TV. The New York Times called it "Dadaist." After Space Ghost came Harvey Birdman: Attorney at Law, Sealab 2021, and The Brak Show, all unconventionally-paced, experimental cartoons made from repurposed Hanna Barbera animations. These became the anchors for the brand-new Adult Swim, which officially debuted in 2001 with an episode of the deadpan Home Movies, a canceled UPN show. 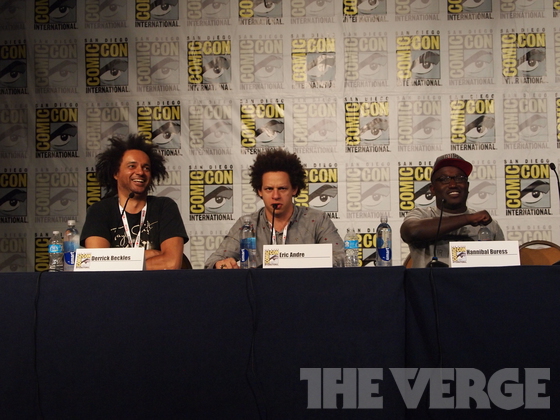 Budgets are still notoriously tight at Adult Swim, although the network has lately been funneling more cash into its programming. The network is now airing 16 live action shows, including The Eric Andre Show, Hot Package, Paul Scheer's NTSF:SD:SUV, and Your Pretty Face Is Going to Hell, a workplace comedy from veterans of Squidbillies, Aqua Teen, and Harvey Birdman.

The push into live action hasn't always gone over well with the hardcore Adult Swim fans, and the addition of personalities like Rob Corddry, Paul Scheer, Kristen Schaal, Patton Oswalt, and other prominent comedians is starting to make the place feel like Comedy Central. But adult animation no longer belongs to Adult Swim. Fox has come out with two successful Adult Swim-esque shows recently with Archer, the spy comedy on FX, and Bob's Burgers – created by Adult Swim alum Loren Bouchard – to which Adult Swim has secured off-network rights. Adult Swim has to innovate somewhere if it wants to keep the avant-garde spirit that made it such a hit.

Bring it on, Hot Package.