Welcome to Trickster, the alternative Comic-Con for indie artists that takes place in a bar

Welcome to Trickster, the alternative Comic-Con for indie artists that takes place in a bar

As the main event sells out, comic industry underdogs head to the Tavern Bowl

Comic-Con is happening now in San Diego, which means large crowds, long lines, costumes galore, and over-the-top advertising in every direction. But about ten blocks from the convention center, there's an alternative comics convention happening on a much smaller scale. Trickster, the Berkeley-based artist collective-turned-comics-fest, has taken over a cavernous complex of a bar, the Tavern Bowl, for the four days of the convention. There are panels, signings, nightly live drawing sessions, and a store. "We're tricksters," one artist explained. "You know, like Loki. That's what we are to Comic-Con."

It's well-understood that Comic-Con is no longer about comics. The convention became a staging ground for Hollywood years ago, when comics-based films like X-Men started debuting there. Soon, movies and television shows that had nothing to do with comics were also being promoted at Comic-Con. "It is a little disheartening to walk the floor and see the space allotted for comics creators just keeps getting smaller, and smaller, and smaller," said Victor Lucas, a television producer who has been coming to Comic-Con for 12 years. "A lot of creators have stopped coming. They just don't show up."

"We're tricksters. You know, like Loki. That's what we are to Comic-Con."

Despite losing its purity, many comics creators — and of course, comics fans — still think of Comic-Con as Mecca. But it can be soul-crushing for independent artists to see the masses trample past their booths to check out the Lego display or get a photo with a True Blood star. At Trickster's alternative convention, now in its third year, those independent comics artists, writers, and illustrators have a homebase. 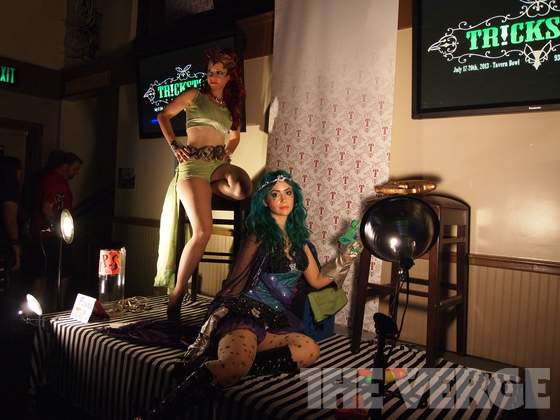 Models pose for "Drink and Draw" at Trickster.

Trickster is now a hub for artists like Ed Brubaker, co-creator of Fatale, a fantastical crime noir series; Paul Pope, creator of Battling Boy, a superhero graphic novel set on an alternate Earth; and Sara Varon, creator of Robot Dreams, a wordless graphic novel about friendship and betrayal between a robot and a dog. Most of the artists are self-published, although many have worked at the large comics publishing houses at some point as inkers, colorists, writers, and illustrators.

Trickster was started in Berkeley by Anita Coulter, a gallery curator and former puppeteer; Ted Mathot, a writer, artist, and self-publisher who works at Pixar by day; and Scott Morse, a graphic novelist who also does work for Pixar. Coulter wanted a store where she could invite artists to sell their work and relieve them of the demoralizing hassle of sitting behind a booth. Mathot wanted to create an atmosphere that would get people excited about art. Morse wanted classes that would help artists improve themselves. They threw together the first Trickster, which took place in a wine shop across the street from Comic-Con, in eight weeks.

"It's not the con's fault. It's a free market, and the big check is going to push the little check away."

"We wanted to do a little oasis that just focuses on the artist and the work," Coulter said. "Comic-Con is incredible. But there is only a certain amount of time they can run that show, and there's only a certain amount of badges they can sell for that show. It's not the con's fault. It's just, it's a free market, and the big check is going to push the little check away. That's how it happens."

Her hope is that San Diego will become like Angoulême, a town in France that gets taken over by a big comics festival every winter. "There are little pockets all over the town that focus on different things about art. You can just go through the entire town and discover all this incredible, amazing art," Coulter said. She's noticed more pop-up shops in downtown recently, as well as other alternative convention experiences like Nerd HQ, which hosts pop culture events off-site during Comic-Con. 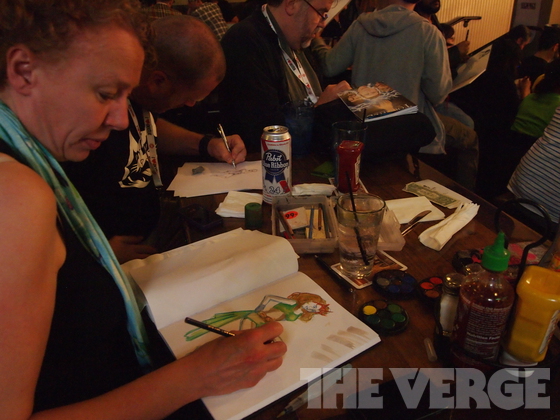 An artist drinking and drawing at Trickster.

On Saturday night, about 30 artists sharpened pencils, laid out pens, or unsheathed their iPads as two women in superhero get-up posed frozen on a small stage. Everett Downing, an artist and animator at Pixar, wasn't sure if he had any energy left to drink and draw. But he was glad to be at the Tavern Bowl, surrounded by dozens of fellow independent comics creators.

"Comic-Con is like this superpower industry machine and a creator can get lost in the shuffle," Downing said. "Finding even a presence for yourself out there — it's like trying to yell at a concert or trying to tell a story when a lot of people are all talking at the same time. This is a way of connecting. We're all going to be here, so it's a chance to connect and compare and contrast notes and learn from each other."

Trickster now has a gallery and retail space in Berkeley, and its founders plan to continue growing and empowering artists. "I'm just glad there is a place for artists to gather and hang out," said Michael Manomivibul, a freelance illustrator who started doing comics full-time a year ago. "That's very valuable because we all live in caves otherwise, and we don't see each other."