Days after photos and video surfaced of what appears to be an updated Nexus 7 tablet from Google, the @evleaks Twitter account has provided press images to corroborate the claims. The pictures show the new rear-facing camera, notification light, and dual speakers, as well as the horizontally orientated "Nexus" wordmark and the logo of manufacturer Asus. @evleaks suggests that the tablet will be available in 16GB and 32GB models.

The next Nexus could be announced as soon as this week; Google is holding an event with Android and Chrome chief Sundar Pichai on Wednesday. The company tends to launch new versions of Android alongside new hardware, so it's more than possible that the Nexus 7 update could mark our first official look at Android 4.3 as well.

Update: According to an alleged Best Buy circular posted to Google+ and spotted by Android Central, the new Nexus 7 will have a 1920 x 1200 display and sell for $229.99 in its 16GB incarnation. 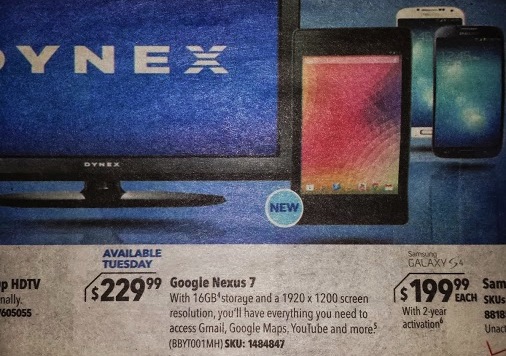