How many tablets can Samsung possibly need?

Share All sharing options for: Samsung Galaxy Tab 3 8.0 and 10.1 review

Samsung has no idea what size Android device you want but, by golly, it’s going to find out. Throughout its massive Galaxy lineup, Samsung has hedged its bets on almost every possible device size in an attempt to appeal to as wide an audience as possible.

Each great Samsung device has at least one feature that justifies its existence beyond a decimal difference in screen size. The Note 10.1 has a great stylus, the Galaxy S4 has a laundry list of software tweaks. But Samsung seems to have taken a different approach with its line of Tabs: shoot for the middle and be as nondescript as possible.

On paper, it’s not that the 8-inch or 10.1-inch Galaxy Tabs are particularly bad — they’re just not particularly good. Samsung isn’t trying something new or sticking it to the competition, which seems counterintuitive in a market full of beautiful displays, big batteries, and lengthy lists of features

So this generation of Galaxy Tabs must have something going for them, right? Or are they doomed to join the Galaxy Prevail and Galaxy Ace in the scrapheap of forgotten Samsung devices? That’s exactly what we were determined to figure out. David Pierce and I split the two devices, and started looking.

For me, 8 inches is the absolute perfect size for a tablet. Anything larger makes me want to grab a laptop and do real work, and smaller tablets just feel cramped. A highly portable laptop, an 8-inch tablet, and a smartphone are my ideal technological trinity. That’s why I bought an iPad mini, and why I was excited to try out the Galaxy Tab 3 8.0.

Eight inches is the perfect size for a tablet

The 8.0 looks almost exactly like a blown-up Galaxy S4, replicating the same uncomfortably smooth plastic housing and weird imitation-silver band around the edges. The only design departures are the rear-facing camera moving to the top-left corner, and the TV infrared blaster slotted on the right edge rather than the top.

It’s almost as if the designers had gone on vacation as the 8-inch Tab 3 was being finalized. And after my palm accidentally pressed the capacitive back button for the 15th time, I was convinced that no one at Samsung actually tried this tablet before shipping.

The 16:10 aspect ratio of the 8-inch Tab 3 gives this tablet a much different feel than the 4:3 iPad mini. The taller, narrower 8.0 is easier to grip with one hand, and is much better suited for watching widescreen videos without letterboxes. Websites look way too narrow and long in portrait mode, though, and landscape cuts things off too short. Maybe I’m spoiled by the Alien Blue app on my iPad mini, but browsing Reddit felt cramped on the 8.0, especially with the banner ad at the bottom of the BaconReader client.

A study in averageness, all the way around

One thing that the 8.0 did not emulate was the S4’s bright, beautiful, pixel-rich screen. Instead, the 1280 x 800 TFT display merely satisfies. Both brightness and viewing angles are fine, but the 7-inch Kindle Fire HD’s IPS display has the same resolution and looks brighter and more vivid. Despite the higher pixel density, the 8.0 looks about the same as the iPad mini, which was released last year.

But the display is only one aspect of the 8.0’s pursuit of averageness. The entire device just felt laggy and slow. The 1.5GHz dual-core Samsung Exynos 4 processor and 1.5GB of RAM let me play Super Monsters Ate My Condo and Dead Trigger without issues, but there’s noticeable lag throughout the operating system. There’s an unnatural pause when switching between portrait and landscape mode and rendering struggles to keep up when I’m scrolling fast. I also found myself swiping two or three times in order to pull down the notification menu. It’s not as slow as some other Android tablets, but it’s far from the fastest.

Samsung brings a host of features to the 8.0, most borrowed from the S4, but the list feels quickly cobbled together without much thought. There’s no NFC, but Samsung did include driving mode. Multi-window made the cut — which is fantastic on the 8.0’s larger screen — but Air Gestures would have been equally useful on this larger device. My favorite part of the 8-inch Tab 3 is the universal remote and the WatchOn TV-guide app, which is also on Galaxy S4. Browsing through upcoming shows and finding new content is a pleasure with the larger screen. Like the S4, the Tab 3 has complete access to your entertainment center via the IR blaster on the left edge of the tablet.

The battery life lasted me a full day of moderate usage, but didn’t last nearly as long as my iPad mini. The biggest surprise was pulling the 8.0 out of my bag after two days of no use and finding the battery completely dead. For a device that only gets occasional use, the standby time was very disappointing.

Let me just get right to it: I can’t think of a single reason to buy the Galaxy Tab 3 10.1. I don’t even really know why it exists. The 8.0 is at least a new size for Samsung, but all the 10.1 does is rehash old ideas — many of which should be long gone by now.

Like the 8-inch model, the 10.1 is simply a slightly larger cut from the Galaxy S4 cloth. That means it’s thin (0.3 inches, actually a hair thinner than the S4) and light (1.1 pounds), and that it has the physical home button I’ve grown to love. It also means it’s made of slimy, greasy plastic that proudly displays fingerprints and just doesn’t feel good to hold and use. It’s sturdy and dense, but doesn’t feel premium like the iPad or the Xperia Tablet Z. It does have a microSD card slot for expanding storage beyond the included 16GB, but that’s its only real advantage.

I always assumed the next Galaxy Tab would be just like the Nexus 10, which Samsung manufactures anyway. Just slap on a big logo, and call it a day. Sadly, it’s not — and nowhere is that more obvious than the display. Rather than the bright, beautiful, 2560 x 1600 panel on the Nexus 10, the Galaxy Tab 3 10.1 has a 10.1-inch, 1280 x 800 TFT screen that would be more at home on, well, last year’s Galaxy Tab. Or the Galaxy Note 10.1. Or the Tab 3 8.0, which puts as many pixels in a far smaller display. It’s a decent display, with solid viewing angles and color reproduction, but it’s bested by many others in its class. When so many of Samsung’s other devices have such great screens, and when the company clearly has access to spectacular tablet displays, the lethargic improvements here don’t really make sense.

Samsung did make a few hardware tweaks, though, some good and some bad. You don’t need a proprietary charger anymore, since the Tab 3 just needs Micro USB to work — I like that. I don’t like that the speakers have been moved from the front to the sides; they still sound better than I’d expect from a tablet, but they’re much quieter and easier to block than on the Tab 2. Plus, the speakers broke up what is otherwise a pretty drab design, with only the home button and a huge Samsung logo to catch your eye. My review unit is black all over with a silver edge, and there’s an all-white version that’s slightly more eye-catching.

As with the smaller model, Samsung picked seemingly at random from the grab-bag of Galaxy S4 features, building in some of its handset’s many software tweaks but ignoring others for no obvious reason. Smart Stay is here, preventing the tablet from turning off when you’re looking at it. I’d rather trade it for multi-window support, which would be useful on a 10-inch screen but yet only comes with the 8- and 5-inch screens of the Tab 3 8.0 and GS4. There’s no screen mirroring, either. The Tab 3 10.1 comes with the latest versions of both Android (4.2.2) and TouchWiz, yet has few of the things that make Samsung devices unique.

Samsung has so many unique features, but none are present here

And that, in a nutshell, is the problem. Why would you buy the Tab 3 10.1? Its 1.6GHz Intel processor is reasonably fast and offers the device about two full days of battery life, but it has some glaring issues — scrolling is horribly jittery, and apps take longer to open than they should. The hardware is decent but utterly forgettable, from the 3-megapixel rear camera to the IR blaster that lets you use the Tab 3 10.1 as a universal remote. It has no class-leading specs and few unique software features. The Android tablet app ecosystem remains a problem for every manufacturer, but most good slates offer something unique. The Sony Xperia Tablet Z is tiny and water-resistant; the Galaxy Note 10.1 has great pen support; the Kindle Fire HD has Amazon’s huge content ecosystem. Even the Nexus 10, for the same $399 as the Galaxy Tab 3 10.1, has a display you won’t be able to tear your eyes away from.

Even among the Galaxy Tab lineup, the 10.1 doesn’t stand out. The 8.0 is a better all-around size for tablet use, while the 7.0 is a perfectly suited device for reading. Android apps, which still don’t work well on large tablet screens, work better on the smaller devices as well. 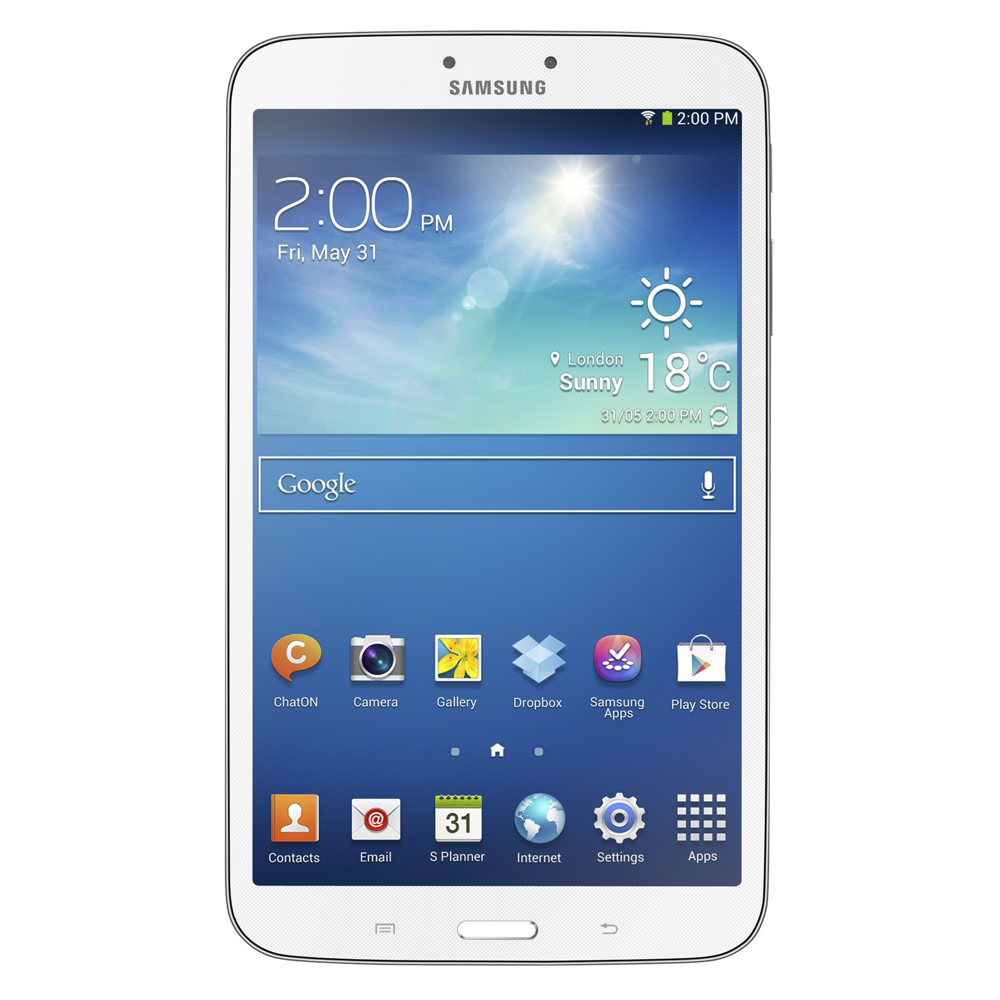 The right size for an Android tablet, but the execution's not quite there

For all its shortcomings, the 8.0 stands out from the competition by simply being an 8-inch tablet. The Kindle Fire HD is cheaper and has a better screen, but the 8.0’s larger screen is a real advantage. The iPad mini offers a vastly superior app ecosystem and a much better design, but the cost of repurchasing all those Android apps might make the cost disparity too high.

If you’re already invested in the Android ecosystem, that’s enough to justify my recommendation. The Galaxy Tab 3 8.0 is good enough, and just the right size, in a category where those two things rarely come together. At least until a new and higher-res Nexus 7 quickly rises back to the top of the class.

The 10.1, is a slightly different story. It’s not even the best $399 10-inch Android tablet made by Samsung. That honor goes to the Nexus 10, which has Google’s uninhibited software, a beautiful high-res screen, and far better build quality. Samsung’s Galaxy Note 10.1 is a better tablet, with more software and great pen input; so are most other 10-inch slates.

Samsung could have stood out against Amazon, Apple, Sony, and Google, by creating forgettable tablets at an impossible-to-ignore price, but neither of these tablets are particularly cheap, either. The Galaxy Tab 3 8.0 is $299 and the 10.1 is $399, a tad less than a few competing tablets but still a significant chunk of change. If you want a Samsung tablet, you should buy the Note 10.1, which has plenty of compelling features (and is much improved after a big software update). If you want an 8-inch tablet, it’s still hard to beat the iPad mini — especially when it’s only $30 more than the Tab 3 8.0. And for your $399, you can buy either an iPad 2 or a Nexus 10, both much better products than the Tab 3 10.1.

It’s almost as if Samsung wanted to release the 8-inch and 10.1-inch Galaxy Tab 3, you know, just because. Other tablets are at least attempting to outpace the competition, whether it’s the Kindle Fire HD’s stunning display or the waterproof Sony Xperia Tablet Z. But the Tab 3s seem to have been simply aiming for an “it works!” before going to market. And “it works!” isn’t nearly good enough. 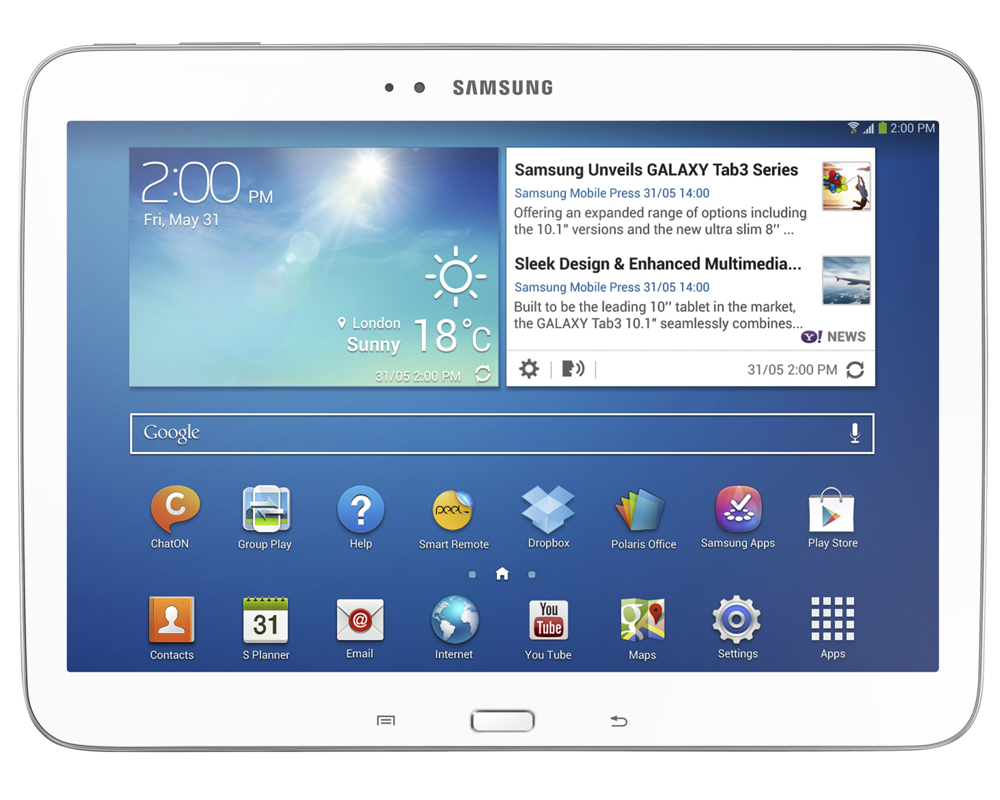 There's no reason to buy this tablet over any other
Google