SSDs for everyone? Not so fast

Share All sharing options for: SSDs for everyone? Not so fast

Somewhere far removed from the cacophony of big news stories emerging last week, Samsung quietly uttered three magical and potentially momentous words: "SSDs for everyone." Solid state drives have long been regarded as the heir apparent to hard disk storage, promising to revolutionize the PC user experience with dramatically improved speed and reliability. Samsung’s bold new marketing slogan, introduced in Seoul on Thursday, signals the company’s intent to bring SSDs to the widest possible audience of consumers, literally everyone. But is the big component supplier overreaching with its promise? Or are we already living in the SSD age?

The inexorable transition away from magnetic hard drives and toward solid state storage has proceeded at a steady pace for a number of years now. As Scott Wasson of The Tech Report explains, "Flash memory capacity prices are dropping at something close to a Moore's Law rate, so the amount of storage you can get per dollar roughly doubles every couple of years." The per-gigabyte cost of SSDs keeps declining, while the rate of innovation in conventional hard disk drives has slowed to a trickle. In fact, the biggest advance in HDD technology in recent times has been to combine them with SSDs — Apple’s Fusion Drives are the best-known example of this new category of hybrid drives.

"OEMs are so cost-sensitive that they're actually irrational."

Hard drives may lack the performance to compete with SSDs in a straight fight, but they are still popular with PC vendors because of the vast quantities of cheap storage they provide. Anand Shimpi of AnandTech commends the progress by SSD makers in narrowing the price gap, however he believes "the cost-per-GB difference between HDDs and SSDs is still tremendous." Samsung’s new EVO line and Crucial’s M500 series can offer up to 1TB of fast storage for 63 cents per gigabyte, but that’s still an order of magnitude higher than hard disk prices. Scott Wasson agrees that price disparity is the biggest hurdle to overcome, noting that PC "OEMs are so cost-sensitive that they're actually irrational."

The proliferation of online services like Dropbox for storage and Netflix for streaming has helped to reduce the general need for large reserves of local storage. Whereas in the past keeping your entire music collection with you was limited by the size of your drive, nowadays services like Spotify, Google Music, or Amazon Cloud Player can maintain your listening habits via the internet. So if your choice is between a large HDD that produces noise and heat or a smaller-capacity SSD that makes the entire user experience snappier, the latter proposition is looking increasingly preferable with every day that passes.

PC Magazine’s lead desktop analyst Joel Santo Domingo endorses this perspective strongly, arguing that "mobile users have been trained by their phones and tablets to expect instant-on and quick startup times" — two of the most immediately tangible advantages of SSDs. He finds agreement coming from Hexus’ Parm Mann, who believes that "64GB of flash is what a 320GB hard disk used to be: the baseline for an affordable, no-frills laptop." These positive assessments are couched in important caveats, however: Santo Domingo underlines that such configurations only make sense "where 24 / 7 internet access is a given, and not a luxury," while Mann doesn’t anticipate the truly widespread displacement of HDDs until the end of 2014.

"Mobile users have been trained by their devices to expect instant-on and quick startup times."

On the desktop side of things, "larger storage capacity can still be sold as a benefit," according to Santo Domingo, with electronics stores finding it easier to sell bigger storage capacities than to evangelize the benefits of faster storage performance. The latter is a qualitative superiority whereas the former is a cold hard statistic — and if the megapixel war of the last decade has taught us anything, it’s that bigger numbers sell in bigger numbers.

Apple’s aggressive switch to solid state storage across almost its entire laptop and desktop line has done a lot to counter the prevailing wisdom that bigger is always better. Nonetheless, Macs have never been intended or priced as mass-market devices, and Samsung’s proclamation still feels more like an aspiration than a statement of present fact. The Korean company itself estimates that only 10 percent of laptops sold in 2013 will feature solid state drives, a surprisingly low proportion. Marketing VP Mang Kyong-moo forecasts that adoption rate to rise beyond 30 percent at some point in 2015 or 2016, which might still not be fast enough for Samsung’s liking now that the company has sold off its hard drive manufacturing arm. 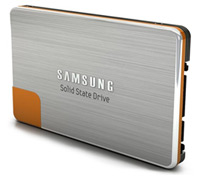 SSDs should be used by everyone: they’re both technically and practically better than hard drives and they have a higher ceiling for future improvements. Still, the current reality is that their prices haven’t yet dipped low enough, PC makers aren’t all as deeply invested in flash storage as Samsung is, and end users aren’t quite informed enough about the benefits. The halcyonic time of SSD ubiquity seems a certainty in our future, but it remains in the future.

There’s little consensus on when or how exactly we’ll get there. Scott Wasson suggests hybrid SSD / HDD storage as a sensible approach to bridge the transition, which might take two, three, or even four years. Parm Mann is of the opinion that the PC industry "will adopt an iPad-like storage model, where maximum onboard capacity is sacrificed in favor of thinner devices," while Anand Shimpi paints an altogether different scenario: "Cheap PCs will never really have to worry about the SSD transition because they'll just lose their market share to Chromebooks and tablets that already use solid state storage."

Whichever path leads us there, the one thing everyone agrees on is that our destination is indeed "SSDs for everyone." We’re just not there yet.