Despair is a game in 'Gods Will Be Watching'

A stressful browser game is getting a bigger, better remake

Share All sharing options for: Despair is a game in 'Gods Will Be Watching'

Gods Will Be Watching is a game where people will die — and it's your fault. Stranded on a disease-ridden alien planet, it's your job to simply keep your small band of survivors alive. You'll have to get people to forage for food, attempt to repair the radio needed for rescue, and create vaccines to fight against a sci-fi plague. The twist is that you can only make five decisions each day — there's not enough time to save everyone. The game, which was made in just 72 hours as part of the Ludum Dare game-making competition, made a splash when it was released earlier this year, and now the developers have decided to take that premise and expand it into a more fleshed out, bigger experience. And they've cooked up even more horrible situations filled with even tougher decisions to make.

"A moral puzzler about sacrifices and despair."

The original game was made up of just one scene — a stranded crew huddled around a dying fire. Each day you watched as the crew's morale and health declined, resources dwindled, and eventually characters died or ran off to fend for themselves. It was incredibly stressful because, no matter what choices you made, people would end up dying. You just had to make the best out of a terrible situation. And people seemed to enjoy doing just that — more than 140,000 people played it in the first month after launch. "The feedback of so many players is what defined what the remake was going to be," explains Jordi de Paco from developer Deconstructeam. "A moral puzzler about sacrifices and despair."

That remake will take the original idea and build on it, creating scenarios that will potentially be even more nerve-racking. It will flesh out the sci-fi narrative that's briefly touched on in the original game, which involves an evil mega-corporation in the mold of Weyland-Yutani from the Aliens movies. "We wanted to preserve the player experience of the original prototype, and defined some key elements that every scenario should have: moral dilemma, dramatic tension, human ethics, desolation, tough decisions," says de Paco. "Mixing it with the plot we sketched about the relationship between Xenolifer and the Everdusk Company — the two main forces in this story — all the puzzles almost sprouted out naturally."

New scenarios teased include a hostage situation in which you'll need to keep everyone suitably scared and subdued so that another character can hack into a computer, and another in which your character has to endure 20 straight days of torture.

All of these scenes look to play out much differently than the original prototype that captivated players earlier this year, leading to decision-making and puzzle solving that should feel fresh and interesting. The hardest part for the team has been balancing out creating these stressful scenarios with making a game people will actually want to play. "Gods Will Be Watching is the first game we've made which is more difficult to design than to program," says de Paco. "We spent hundreds of hours play-testing the puzzles with paper, pen, and dice, adding carefully all the dramatic twists to keep the puzzles challenging but thrilling." 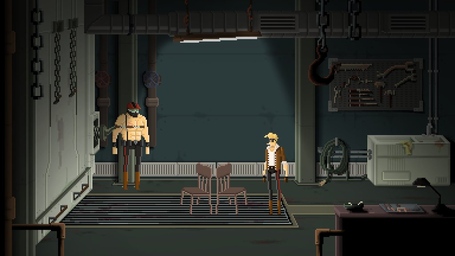 The team has managed to successfully crowdfund the new game, reaching its relatively modest goal of €8,000 (around $10,500) with several weeks still remaining. The plan is to launch it, with six scenarios to play through, on Windows, Mac, Linux, iOS, and Android next February. And depending on how the funding goes, the studio might even be adding elements like voice acting and free post-launch downloadable content. Actually hearing the strain in your crewmate's voice could create an added layer of tension to the experience. And as games like The Walking Dead have shown, a number of people actually like that stress — making tough choices helps build a more emotional connection to the story and characters. At least, the ones who make it out alive.