Samsung unlikely to pull away from Google at October developer event

The Galaxy maker can't get rid of Google Play — yet

Share All sharing options for: Samsung unlikely to pull away from Google at October developer event

Samsung has announced its "first ever, large scale, multi-day developer event" for late October, a sign that the global electronics giant is aiming to move from a mere hardware maker — subject in many ways to the whims of the platforms it supports — to a platform provider in its own right.

People familiar with the company's plans say that Samsung intends to make significant announcements at the event. One reveal that isn't expected, though, is an Amazon-style divorce from Google that would replace the Google Play app and media ecosystem with another of Samsung's own creation. "The relationship [between Google and Samsung] is symbiotic," says one source. Persistent rumors and speculation have suggested that Samsung could effectively take ownership of Android, owing to its market share dominance across multiple market segments; it's a rumor that is said to have riled departed Android chief Andy Rubin into lobbying for Google's purchase of Motorola. While a breakaway could still happen eventually, don't expect it this year. The recent release of the Galaxy S4 Google Play edition only underscores that the companies are still working together. One source also suggested that there's no need for Samsung to fork Android, already having "hedges" in place — Tizen and Windows Phone — should the relationship with Google sour. 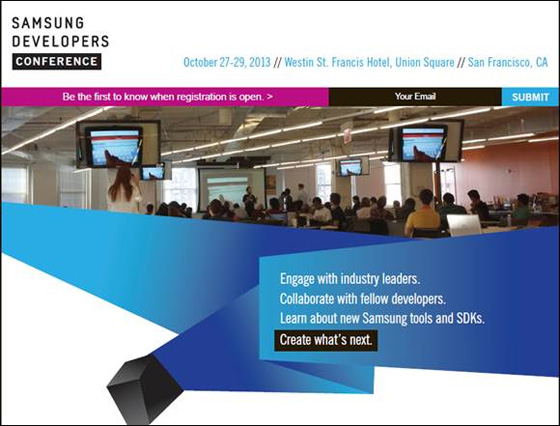 "While I'm sure some will try to spin this as Samsung vs. Google, vendor developer programs are not new," says Avi Greengart, research director for consumer devices at Current Analysis, noting that Motorola, Nokia, and Samsung itself have all pushed developer programs for years. Device makers see SDKs — and the opportunity to create their own developer community — as a differentiator that can help sell more phones and tablets. As the fortunes of Nokia and Motorola have shown, though, developer programs aren't slam dunks.

The hardware is the platform

Sources say that the developer event — which will be held in San Francisco, home base for many of the individuals and firms Samsung will be trying to target — is expected to focus largely on the company's hardware as a common platform. Recent launches like the HomeSync set-top box and WatchON service show a desire to unify services across an entire range of Samsung products like TVs, phones, and tablets, but thus far, that unity hasn't consistently been made available and promoted to third-party developers. According to an NPD report, Samsung owns more than a quarter of flat panel market share globally — the largest of any company — and its dominance in smartphones is no secret. A more consistent SDK could enable Samsung to enjoy the same kind of brand synergy as Apple, where every device falls under the iTunes and AirPlay umbrella.

Though neither Tizen nor Windows Phone have even a modest fraction of Android's enormous market share, creating a "Samsung platform" that rests atop the company's hardware, spanning multiple operating systems, could help break it of its deep dependence on Google's software and ecosystem over time.

Samsung did not immediately respond to a request for comment.