Inked at Comic-Con: a superfan marks every year with a new tattoo

Share All sharing options for: Inked at Comic-Con: a superfan marks every year with a new tattoo

During Comic-Con 2009, Timmy Madere got drunk in the middle of the day and stumbled into Nothing Sacred Tattoo, the closest tattoo parlor to the convention center. He walked out with his first tattoo ever: a Green Lantern symbol on the middle finger of his right hand. Since then, it's become a tradition. Every year he comes to Nothing Sacred and gets tattooed by Todd Smithson, a skater who has tribal tattoos covering his face and zero interest in comics.

"I came in and looked at Todd's face and body and went, okay this is the guy I want to tattoo me," recalled Madere, who is from New Orleans. He’s not interested in getting a tattoo from anyone else, or at any other time of year.

Madere is a huge fan of Kevin Smith, the cartoon Venture Bros., and all things related to DC Comics. He started coming to Comic-Con in 2006 because he needed cheering up after Hurricane Katrina hit and his brother had some extra airline miles. He stayed in Chula Vista, about 13 miles south of the convention, in a lousy neighborhood that would have been scary if he weren't used to it back home. As lonely as it was to venture to the massive event alone, he felt surrounded by people who understood him. He knew he'd be coming back every year.

"It's like going to hang out with 100,000 friends I didn't know I had," he said. "Even if you're not there for the same thing, you know about the same things. At home I dress for Halloween and Mardi Gras, and I'd say maybe one in 50 people will know who I am and why I'm dressed like that." 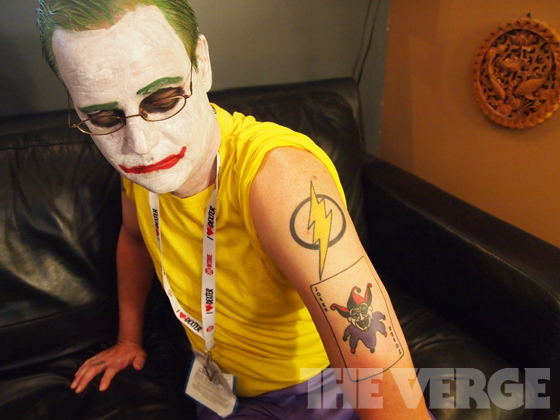 Madere showed up for his appointment on Saturday dressed as The Joker, in a yellow-and-blue suit, green hair, white face-paint with the classic red smile, and black shoes with painted-on white tips. "The shoes are steel toe, because that's what I could find at Goodwill," he said in his Louisiana drawl. "My legs are killing me."

Madere has decided he wants a tattoo for every year he's been to Comic-Con, which means he has some catching up to do. On the first day of the convention, he got an intricate joker card as an homage to the villain Harley Quinn. Today, he's getting the Cyborg Superman symbol. He lies down on the tattoo table and lifts his right arm so Smithson can reach the inner tricep. The gun starts whirring.

"I'm trying to get you to let me do just one big character on you at some point," Smithson said.

"I still want to get the Starro going across on my back," Madere said. "Starro is a villain, a DC villain. He's just a giant star fish —"

Smithson interrupts him: "Ah that's right, you were supposed to do that last year."

Madere continues. "He attaches himself to you, and then he just controls your mind. I want to get one on my back with the tentacles crawling around my neck. We're going to wait on that one, though. That will celebrate the 10th." 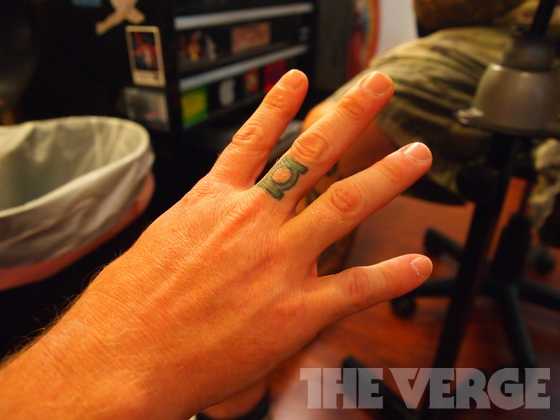 After Comic-Con 2013, he'll be at seven tattoos: the Green Lantern ring, the Flash lightning bolt, a symbol for the villain Bizarro Superman, a reverse yellow lightning bolt for the villain Black Adam, the joker card on his inner arm, a joker card on the outside of his tricep, and the black Superman symbol. "It's weird because comics were the things that inspired me, that helped shape me as a kid I guess, and I ended up getting a bunch of villain tattoos," he said. "They have the coolest symbols! Everybody's got a Batman or a Superman. No one ever gets the alternative."

Smithson starts shading in the tattoo and Madere flinches. "What he's doing right now hurts like hell," he said. He doesn't usually go through the experience sober, he admitted, but he has a date later with a woman he met through work. She lives in San Diego and she likes comics, too. Their plan is to watch Serenity in the park and then go to the Adult Swim party, to which Madere scored an invite for dressing up as Hank Venture, one half of the Venture Bros. duo.

"Comics were the things that inspired me, that helped shape me as a kid."

"That's another reason I come here," he said. "That's actually one of the motivating factors that brought me here in the first place, because it's like, maybe I'll meet that person for me, because there's so many people that come out here that are into what I'm into. New Orleans is a cool, fairly progressive city but there aren't that many people into comics, et cetera."

His co-workers would make fun of him if they knew what he does at Comic-Con, he said. "It's lonely," he said. "And it doesn't set in until the last day I'm here, usually, that I'm all by myself."

Madere is jonesing for a cigarette, but Smithson insists he's about done. Madere still has to run back to his hotel to change costumes again before he meets his date, but he’s staying close by this time. "I blow so much money on this bullshit," he said. "How much? Honestly, I don’t know — close to five grand probably. But I go all out. This is vacation to the extreme. I try and live like I wanna live one day, not like how I normally live." 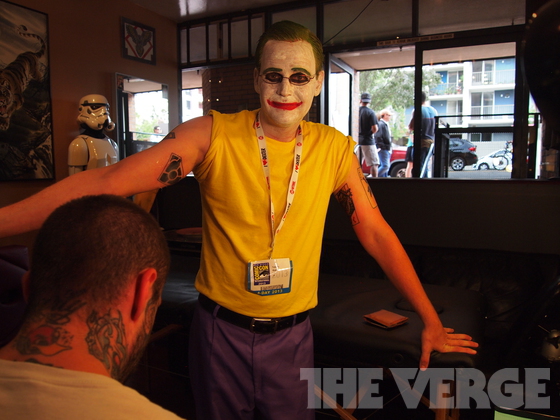 Smithson pronounces the tattoo done and starts wrapping up Madere’s arm. Nothing Sacred has done half a dozen Comic-Con-related tattoos this year. One couple got matching Empire tattoos; another girl got the retro-looking "POW!" that used to indicate punching in old comics. "I try and convince somebody else every year to do it, because why not?" Madere said. "It's the best Comic-Con memory. It lasts forever." No one has taken him up on it yet.

He loves his new tattoos. "Tonight I'm wearing a costume with short sleeves so I’m going to be able to get to ‘em to put lotion on ‘em and take care of them a little bit," he said. Then he settled up, put on his yellow jacket, stuck a cigarette in his mouth, and went off to meet his date for the evening.