Everything we've seen ahead of the Moto X's official unveiling suggests Motorola's upcoming flagship will offer a software experience that isn't too far off from stock Android. However, Motorola looks poised to deviate from Google's path with at least one key application: the camera. Newly leaked screenshots obtained by Android Police reveal the user interface of the Moto X camera app, and it's radically different from anything we've previously seen from Motorola — or Google.

Rather than tapping the screen to adjust settings, the app seen here makes heavy use of swipe gestures. Swiping from the left brings up a revolving carousel of camera options: the screenshots showcase the usual suspects like flash and panorama shooting, but also reveals a rumored slow motion video modes. Other images confirm that you'll be able to immediately pull up the Moto X camera with two rapid flicks of your wrist, and quick toggles for audio recording and geotagging are also visible. Swiping from the right quickly brings up the system gallery, a shortcut that's been incorporated in stock Android for some time. With Motorola set to reveal the Moto X on August 1st, we'll be seeing the full capabilities of this camera before long. 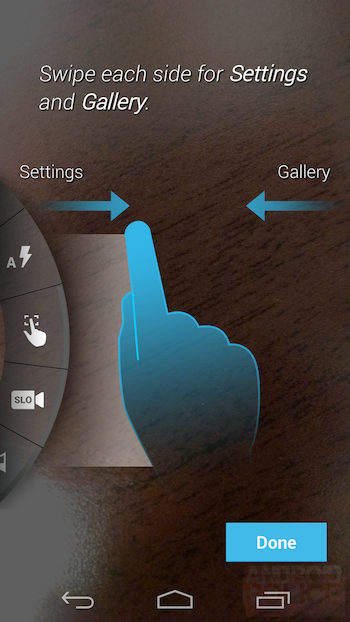