Motorola just unveiled its latest lineup of Droid smartphones, and like usual, they're poised to give consumers more choice — and not just an easy decision. The $99 Droid Mini, as Motorola puts it, is "compact without compromise;" the $199 Droid Ultra is supposedly the thinnest smartphone ever; and the $299 Droid Maxx includes a massive battery that’s meant to last through two full days. That’s plenty of options within Motorola’s selection alone, but we're taking a look at how they stand up to other flagship devices on Verizon, as well as their miniature counterparts. 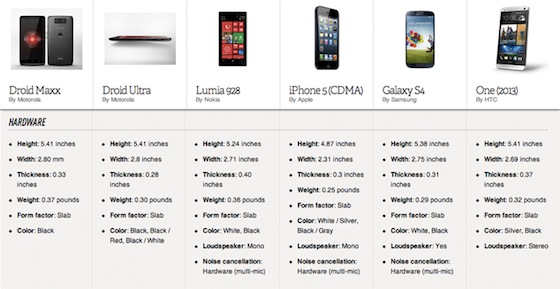 720p isn't stellar on the Maxx and Ultra

One major way in which all of the Droids are alike is their shared 720p resolution. That makes the Droid Mini’s 4.3-inch display better than the Galaxy S4 mini's and right on par with that of the HTC One mini. But it’s bad news for Motorola’s two larger devices: Both the HTC One and the Galaxy S4 have incredibly pixel dense 1080p displays — both measuring in at over 400 pixels per inch (PPI). Because the Ultra and Maxx spread their 720p resolutions across 5-inch displays, their PPIs fall just below 300 — lower than even the Droid Mini. The Lumia 928 and iPhone 5 top the larger Droids as well, though only modestly so.

But where the Ultra and Maxx really make up for it is with each of their specific strengths. Though it isn’t drastic, the .28-inch deep Droid Ultra is thinner than both the Galaxy S4 and the iPhone 5, which come in at around .3-inches thick. Even the Droid Maxx stands up on size: at .33-inches thick, it’s actually a bit trimmer than both the HTC One and Nokia’s Lumia 928.

And if the Maxx is anything like its previous incarnation, its battery life is likely to be as impressive as Motorola claims. Last year’s Droid RAZR Maxx HD already lasted nearly two days in real-world use, and Motorola says that its newest Maxx is meant to last even longer than its predecessor. Even though the battery hasn't increased much in size, the company is claiming around a 33 percent improvement in battery life. 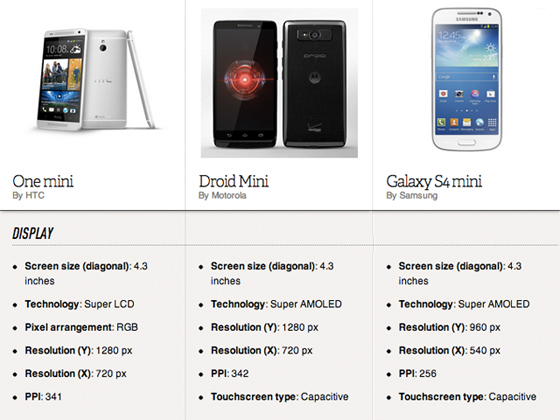 The new Droids also all include a 10-megapixel camera. In terms of sheer pixel quantity, that sits above the iPhone 5 and the Lumia 928, but below the Galaxy S4 — though all three of those have fairly good cameras in actual use. It also puts the Droid mini above both of its miniaturized competitors, though it’s worth noting that the One mini is using larger megapixels to help capture more light.

Of course, we may not have seen the best yet from Motorola. The company is set to reveal its much-teased Moto X smartphone next week, and Google may be announcing a new version of Android as soon as this Wednesday, which could put the latest Droids slightly behind the curve. If you want to see how any other devices stack up to the new Droids, you can use our database tool to make your own comparisons — and every device discussed above can be easily found through the box below.