Since the retirement of the Space Shuttle in 2011, NASA has been looking for a new way to get astronauts up to the International Space Station from the US. Enter the Crew Space Transportation, or CST-100, a new space capsule designed by Boeing specifically to transport up to seven people, or a team of five plus some cargo, into orbit. Boeing, which has been working on the capsule for years, finally showed off the interior of the CST-100 to the world on Monday, letting NASA astronauts enter and explore a simulator version of their future space ride for eight hours at Boeing's Houston Product Support Center in Texas.

If Boeing's CST-100 looks from the outside much like Apollo-era capsules, that's no accident: Boeing was one of the NASA contractors behind those spacecraft as well. But the company and NASA stress that the new CST-100 is a whole different beast. For starters, it's completely weld-free, utilizing a new type of metals fabrication process called "spin forming," which does almost exactly what it sounds like — shaping the shell of the spacecraft out of a revolving disc of metal. It also boasts upgraded thermal protection for astronauts and sensitive cargo, such as science experiments. 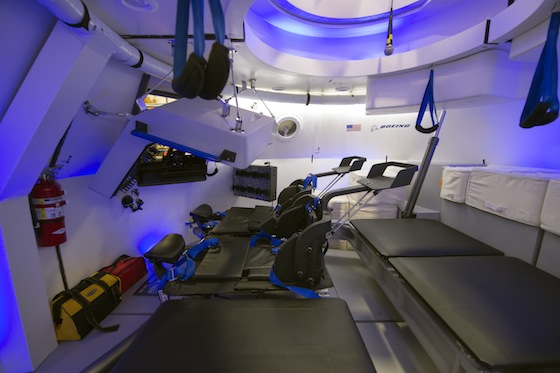 "We want it to be intuitive."

And the interior of CST-100 is where perhaps the most noticeable design changes have been implemented. Boeing and NASA are using tablets to eliminate the switchboards of yore. A Boeing spokesperson told The Verge it hadn't selected which tablet — iPad or one of many Android or Windows variants — it would be using for the craft, but that it was open to proposals from companies. "What you're not going to find is 1,100 or 1,600 switches," said Chris Ferguson, Boeing's crew and missions operations director, himself a former astronaut, in a statement published by NASA. "We don't want to burden them with an inordinate amount of training to fly this vehicle. We want it to be intuitive," he added. It probably won't hurt astronauts moods, either, that the capsule is lit with "ambient sky-blue LED lighting."

A Boeing spokesperson told The Verge the CST-100 was on track to perform its first unmanned test flight in late 2016 or early 2017, and its first human-crewed flight also in 2017. However, it's important to note that Boeing is but one of three companies aiming to become the lead NASA contractor for ferrying astronauts and cargo to and from the space station. SpaceX is working to modify its proven spaceworthy Dragon cargo capsule for the same purpose, and another aerospace company, Sierra Nevada, is working on a Space Shuttle-like craft known as the Dream Chaser. All three have received multi-millions of dollars of funding through NASA's Commercial Crew Program, a competition designed to spur private companies into developing the next generation of spacecraft for US astronauts.

Unfortunately, that competition isn't getting much support from some key US lawmakers: last week, a committee in the Republican-controlled House of Representatives approved a measure that would slash $321 million from NASA's commercial crew budget and $1 billion from the agency overall in 2014. It's not law yet, but at best, NASA and Boeing's new spaceflight ambitions are contending with forces beyond gravity.